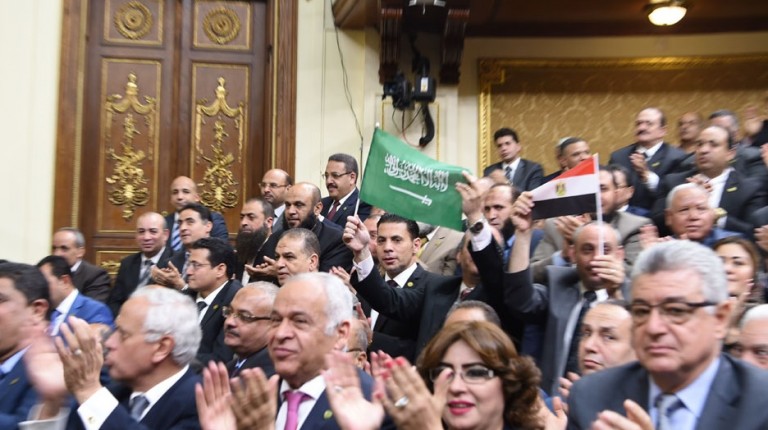 Parliament approved Egyptian-Saudi maritime demarcation on Wednesday in a general session, which means transferring the sovereignty of the Tiran and Sanafir islands to Saudi Arabia.

The general session was held after the approval of the parliament’s Defence and National Security Committee of the agreement.

Over 250 members attended the session. The Egypt Support Coalition and the salafist Nour Party approved the agreement.

Members voted by a show of hands, not by names as demanded by some members. Following the final approval, some members chanted that the “islands are Egyptian.”

The meeting was held in participation with the Constitutional and Legislative Affairs Committee to discuss the agreement and to prepare its content to be set for a final vote in the parliament’s main general session.

The agreement was refereed to the committee during a general session on Tuesday evening amid the rejection of some members.

The meeting was held in participation with the Constitutional and Legislative Affairs Committee to discuss the agreement and to prepare its content to be set for a final vote in the parliament’s main general session.

The agreement was referred to the committee during a general session on Tuesday evening, amid the rejection of some members.

Debates over this constitutional article rose among both sides, as the article’s first part grants the right to parliament to discuss or decide on agreements with foreign countries, stating that “the president of the republic shall represent the state in its foreign relations and conclude treaties and ratify them after the approval of the House of Representatives.”

Parliament is defending its stance to discuss the agreement referring to this part. However, the opposition urges that parliament’s discussion of the agreement is invalid, asserting that the “islands are Egyptians’”, and the last part of the article states that “in all cases, no treaty may be concluded that contradicts the provisions of the constitution or results in ceding any part of state territories.”

Parliament speaker Ali Abdul Aal and pro-government members commented on the argument of the opposition, saying that the agreement was only approved for discussions after being proved as constitutional and that the islands are not Egyptians’.

The government and pro-state members have always claimed that the islands were handed to Egypt by Saudi Arabia for protection and that they are part of “Saudi lands”, denying Egyptian sovereignty over the islands.

The head of the Defence and National Security Committee commented that “the islands were handed to Egypt by Saudi Arabia so that the former would protect them, and now it’s time to return them.”

Approval of the Legislative Committee caused disputes in parliament between opposition and pro-state members regarding the agreement, which resulted in the referral of members of the 25-30 coalition to the Disciplinary Committee.

Members demanded to vote by name for maintaining transparency and introducing members who rejected the agreement and those who approved it to the public. A hashtag circulated across social media platforms calling for voting by names.

The agreement, known as the “Red Sea islands”, which sought transferring the sovereignty of Tiran and Sanafir islands to Saudi Arabia, was signed during the visit of Saudi King Salman bin Abdulaziz Al Saud in April 2016 to Egypt. It has been a source of public controversy since then and sparked protests that saw the detention of dozens of opponents.

Following the speeches given by Sabahy and Qallash inside the syndicate about the situation and condemning the agreement, protesters decided to take their demonstration to the syndicate’s stairs, where they confronted security forces, according to journalist Moustafa Al-Sayed who participated in the protest.

Head of the Press Syndicate Abdelmohsen Salama said on Tuesday that the syndicate would not be part of any political conflict, asserting during a press conference that the syndicate’s council did not receive any requests to organise sit-ins or protests.

Salama added that he was not against journalists expressing their opinions, but asserted that such expression should occur through an institutional framework, adding that the syndicate would not “enter another dark tunnel.”

“Security forces started pushing us all the way up the stairs. This is a hundred times worse than what happened with Amr Badr,” Al-Sayed said.

On 1 May 2016, the police stormed the syndicate to arrest journalists Amr Badr and Mahmoud Al-Saqa on accusations of posting “false information” on Facebook about the agreement.

The storming in 2016 resulted in several protests and sit-ins held by journalists, as well as the general assembly of the syndicate, which called for the release of all imprisoned journalists, the resignation of the Minister of Interior, and an “official apology” from President Abdel Fattah Al-Sisi.

Salama said during the syndicate’s board elections in a televised interview that he was against the storming.

Furthermore, the current syndicate board also expressed in its first official statement after the elections that it demanded investigations into alleged violations committed by the Ministry of Interior when it stormed the syndicate on 1 May 2016.