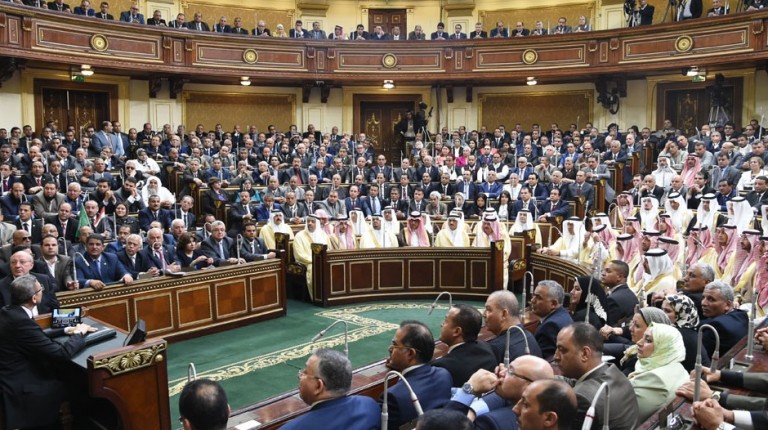 The parliament’s Legislative and Constitutional Committee approved on Tuesday the Egyptian-Saudi maritime demarcation, which sought transferring the sovereignty of the Tiran and Sanafir islands to Saudi Arabia, during the third day of discussion.

The committee referred the agreement to the general session for voting to decide the final decision over the transfer of the islands to Saudi Arabia.

Only eight members rejected the agreement, from a total of 43 members in the committee.

Discussion started early on Tuesday for the third consecutive day.

During the fourth session of the discussions, parliament speaker Ali Abdul Aal decided to refer parliament member (MP) Ahmed Tantawi for investigation on the accusation of insulting the parliament.

He also demanded the Legislative and Constitutional Committee to report the incident. Tantawi smashed the microphone on the ground during the fourth session.

Monday’s session witnessed disputes between members of the Egypt Support Coalition and members of the 25-30 Coalition, resulting in parliament speaker Ali Abdul Aal postponing the session.

In response to this, Abdul Aal adjourned the session and scheduled another meeting for the Legislative Committee members only, media outlets reported.

On Monday evening, debates occurred among the attendees when Haidy Farouq, the adviser on border issues, international sovereignty, and cross-border wealth, noted statements regarding the Egyptian sovereignty of the islands.

Farouq said during the meeting with the Legislative Committee that a number of documents were found in the British and American archives confirming Egyptian sovereignty of the islands.

She said that she was assigned by ambassador Medhat Kamal, by order of the former directer of Egyptian Intelligence, Omar Soliman, and Hussien Tantawy, commander-in-chief of the Egyptian Armed Forces, to search for the ownership of the islands.

Farouq explained that documents noted that the islands are affiliated to Sinai and not to Saudi Arabia, referring that she reviewed a document dated 4 October 1934, confirming this as well.

The statements of the adviser outraged pro-agreement members, including Mortada Mansour.

Minister of Parliamentary and Legal Affairs Omar Marwan also doubted the validity of Farouq’s statements, asserting that documents of the government contradicted it.

Testimonies regarding Saudi sovereignty were also provided during the session by experts.

The deputy of parliament, Soliman Wahdan, said that he has two testimonies over Saudi sovereignty. The first was when an investor in Sinai, named Hesham Yehia, said that he met with former president Hosni Mubarak in 2006 and discussed the islands’ ownership, and Mubarak noted that they are Saudi; however, he did not hand them to Saudi Arabia.

Concerning the second testimony, Wahdan said that he received a call from a boat owner in Port Said and informed him that in 1986 his boat was seized from the islands, so he contacted the parliament members of his constituency to meet with the prime minister, but he redacted to interfere, saying that the islands are Saudi.

The case, known as the “Red Sea islands” case, has been a source of public controversy since April, after the Egyptian presidency announced the islands would return to the sovereignty of Saudi Arabia.