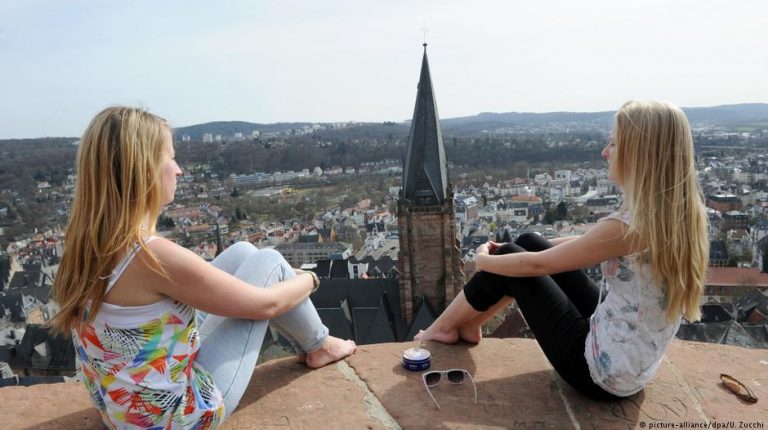 In 1529 Martin Luther had an important appointment in the Hessian university town. He met his rival Protestant reformer Ulrich Zwingli. Visitors to the sites of the events in Marburg can take a trip into the past.Luther is said to have crossed the River Lahn at Weidenhaus Bridge in a coach, with his entire retinue. In the distance, between two hilltops, a swathe can be discerned that marks what used to be the only way from the east to Marburg.

It was 30 September, 1529. At the urgent request of Philip, Landgrave of Hesse, the reformer was to meet his rival Ulrich Zwingli. Historian and writer Christoph Becker has written a book about the town and the Protestant Reformation, including everyday anecdotes. He has been covering the anniversary of the Reformation in 2017 on behalf of the town. “We know that Luther stepped out of his coach, ” the historian says, “and local people’s eyes popped out of their heads, because Luther was the most famous man in Europe.”

Back to the past

On that September day in 1529, Luther took the steep path up to the town, over the marketplace, to a corner house on which a sign now hangs with the inscription, “Martin Luther stayed here in 1529.” Becker laughs. “You could add the words ‘for four hours’ below that.” The reformer merely changed his clothes at the inn and hurried onwards, up to the palace, where the Landgrave awaited him – as did his rival Zwingli.

Stairs lead up to the palace; half-timbered cottages nestle on the hillside. Tourists sit on the marketplace, drinking coffee in the sunshine. They speak German, English, Dutch.

In 1529 a mere 3,500 people lived in Marburg. There were pigsties in the back yards; excrement was washed into the gutters or fed to the pigs. “We want to set up a ‘stench station’ here,” says Becker, and points to a dark corner behind St. Mary’s, the Lutheran parish church. “We want to bring the 16th century to life and present Marburg as an open history book,” explains Richard Laufner, director of the town’s department of cultural affairs.

The “stench station” is part of a trip to the past to which Marburg is inviting visitors from 15-17 June, 2017, so the “stench station” is meant to convey the smells of Luther’s times. An actor will be declaiming Luther’s dinner table anecdotes, the poor will be fed, a minister will brew beer. All year long exhibitions and conferences are taking place, and a play about Luther is being performed in the state theatre.

The reformers remained in Marburg Palace until 4 October, 1529. The theological elite of the times had gathered there: Luther, who had come from Wittenberg with Philip Melanchthon, Zwingli came from Zurich and Martin Bucer from Strasbourg, Justus Jonas from Saxony, other theologians, secular confessors and military men.

Luther and Zwingli differed in a fierce dispute over the interpretation of the Eucharist: for Luther, Christ was actually present in the consecrated bread and wine; for Zwingli, bread and wine merely symbolized the body and blood of Christ. “Luther didn’t even want to come to Marburg,” says the historian Becker. “He feared he might lose.” But Landgrave Philip, a political force behind the Reformation, insisted on the meeting. “Philip was a thoroughgoing power seeker,” says Becker. “He was the second local ruler to introduce the Reformation in his realm.” And, in 1527, he had founded the world’s first Protestant university.

Proceedings at the palace were a very loud affair. Some of the opponents shared a room. The discussions in the princely residence were held in German and Latin, with an order in which speakers were given the floor, one-on-one meetings and a closing discussion. Philip forced the reformers to agree on as many points as possible, but Luther’s ego prevented a complete consensus from being reached. “He refused to give an inch,” Becker says. There was, indeed, a closing agreement with 15 articles, but differences remained on the decisive issue of the Eucharist.

Luther left Marburg on 5 October. The ultimately fruitless colloquy is renowned to this day. “It has an element of folklore about it,” says Christoph Becker. In terms of religious history, it was a decisive step towards the schism between Lutheran and Reformed Protestants.