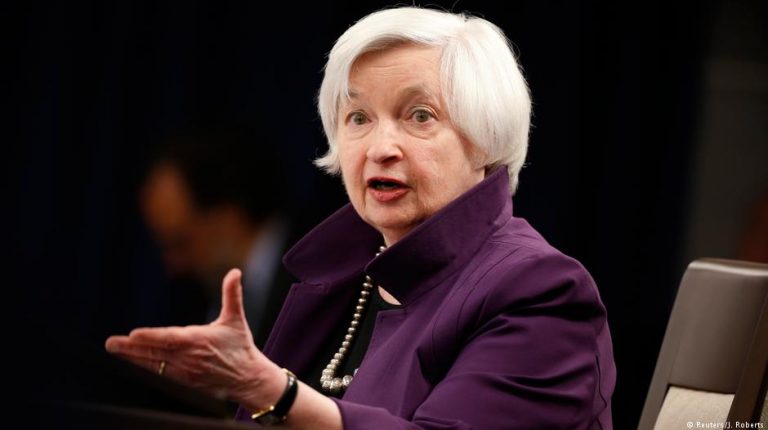 The Federal Reserve has announced the second interest rate hike this year, lifting it by 0.25 percent to 1-1.25 percent. That’s the highest level since 2008, when rates were cut in the wake of the financial crisis.The US Federal Reserve has raised its key interest rate by a quarter point and signaled another increase remains likely this year, despite the continuing release of weak economic data.

In explaining this second rate hike of 2017 and plans for more increases in the coming months, Federal Reserve Chair Janet Yellen said the move reflected the progress in the world’s largest economy.

“The economy is doing well, its showing resilience,” Yellen said in her quarterly press conference.

“We have a very strong labor market, an unemployment rate that’s declined to levels we have not seen since 2001. And even with some moderation in the pace of job growth, we have a labor market that continues to strengthen.”

Despite modest price pressures of late, the Fed expects inflation to pick up eventually, citing “one-off reductions” in certain categories such as cell phone services and prescription drugs as the reason for the recent lower levels.

Those factors mean the Fed’s preferred inflation measure will remain below the two percent target for some time, but could gradually rise to the target level over “the medium term.”

But coming on a day when the consumer price index and retail sales fell, in large part due to falling food and gasoline prices, but with widespread declines in other categories, some economists are saying the Fed is no longer basing its decision on the data, as it has repeatedly said.

Analysts in recent weeks have become increasingly doubtful there would be a third rate increase later this year, as inflation, consumption and other economic data have indicated the weakness seen in the first quarter has continued. Fed futures markets now put the chances for another rate increase this year to below 50 percent.

Chris Low of FTN Financial said the Fed “compromised” by continuing the rate increases despite falling inflation, but “the market expects the Fed to take a break.”

However, Yellen said business and household confidence remain quite strong, and echoed the statement from the Fed’s policy-setting Federal Open Market Committee, which repeated its confidence that the economy will continue to expand “at a moderate pace” even with further gradual rate increases.