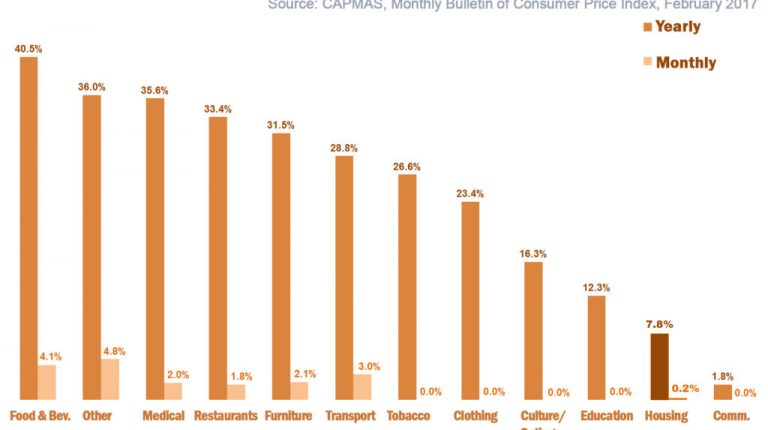 54 percent of Egyptian households already found housing unaffordable even before the bite of the recent economic reforms, according to 10Tooba for Applied Research on the Built Environment’s report.

The report said that with the speed by which nominal wages are being eroded, under the weight of spiking inflation, the only conclusion can be that housing costs are at a catastrophic level.

The report noted that the financial burdens do not end here, as Egyptians are waiting for a new wave of inflation during the coming financial year (FY) 2017/2018.

The economic reform decisions taken by the government in the last quarter (Q4)of 2016 have raised inflation to record levels. Housing costs, including rent, electricity, and maintenance, have been greatly affected by the reform plan. It is unclear whether these affects are directly related to decisions associated with energy and power prices for housing, or indirectly through the current economic crisis affecting real estate prices. This has made financial sacrifices for the sake of housing more arduous for poor and middle-income households.

The economic reforms that took place in Q4 2016 focused on three main actions. The first was the shift from the sales tax to a VAT (value added tax) in October. This raised taxes from 10 percent to 13 percent.

In the same month the currency was devalued, after the Central Bank of Egypt (CBE) decision on November 3rd to liberalise the exchange rate. At the same time, the government announced increases in fuel prices of between 30 percent and 87 percent.

Increases in real estate prices before the EGP devaluation

Budget deficit and local debts, with a widening gap in foreign investment, had already placed a strain on housing costs long before November, which raised living expenses for Egyptian families.

“With the availability of foreign currency shrinking since 2011, the real estate market predicted high inflation early on, which led persons with enough disposable income to venture into real estate, contributing to a surge in real estate prices of between 35 percent and 50 percent annually, the report said. “With a market share of around 2000 units per year, analysts believe that high end real estate companies have contributed to the rise in prices through constantly offering a small number of housing units at every phase to keep demand higher than supply.”

The report explained that the government is also the largest owner of land earmarked for urban development, mostly new cities. In a study published last February, Arqaam Capital estimated that land prices have risen by almost 50 percent since 2013, all because of the interest in real estate and the government’s need to use its resources to recover from its budget deficit.

Half of urban residents buy their homes and are not renting, as almost 54 percent of families are homeowners. People who needed to buy apartments to live in during the last years have suffered from house price increases caused by speculation, according to the report.

With the devaluation of the Egyptian pound in November, the costs of construction material rose, either because they are imported, or because local production costs increased. All this has led high-end and middle-income real estate companies to raise prices in line with the surge in construction costs.

The report noted that the rapid devaluation of the currency, and the rise in property prices, did not halt the increase or turnout to buy property, giving an example that the Palm Hills company declared on 22 November 2016 that all units offered for sale in a project in New Cairo on the 16th of the same month, were totally sold-out.

Inflation in housing costs estimated at 7.8% annual inflation in January

The annual inflation in housing costs was not a factor that saw a large change by January in comparison with other expenses on food and health that estimated at 7.8 percent annual inflation.

The report noted that rents will rise by 10 percent annually, the maximum allowed for by the New Rent law, and could exceed this amount when the contract is renewed. Meanwhile, property prices were increasing by 20 percent annually between 2008 and 2016 before the devaluation of the pound and the wave of prices increased.

Expenditure and Consumption Survey (HIECS) by Central Agency for Public Mobilization and Statistics (CAPMAS) said that average rents constitute only 11 percent and 14.6 percent of total monthly expenses in rural and urban areas respectively.

Rural households seem to be at an advantage, where the relatively lower housing costs and the lower proportion of renters, may help them cope better with inflation. However, rural households earn less in cash terms than urban households, (EGP 38,300 annually rural versus EGP 51,100 annually urban). This means that the rural family has fewer chances to re-prioritise areas of expenditure with the increase in prices.

Therefore, some rural households would have to cut down on expenses when it comes to education, transportation, and communication to fund their housing costs, which means its members would have less opportunities in joining the job market, and with it, less chance of finding a way out of the cycle of poverty.

All these calculations are based on the HIECS estimating housing costs at less than 20 percent of household expenditure, with rent alone making up only 13 percent of expenses, rather than the more real-world figures of 15 percent to 25 percent.

“Further, the government’s is looking to increase its revenue through slapping expensive fines on more than four million families living in illegal housing, as Parliament is about to discuss a law to regularise buildings built without a permit. Parliament has also already begun discussions around abolishing rent control, which a not inconsiderable number of poor and middle-income families currently benefit from,” reads the report, “It is therefore necessary that the government issue legislation to protect those with low incomes from the increase in housing costs.”

Rents rise by 10% annually and could exceed this amount when the contract is renewed, says the report

Almost 54% of families are home owners

Average rents constitute only 11% and 14.6% of total monthly expenses in rural and urban areas respectively