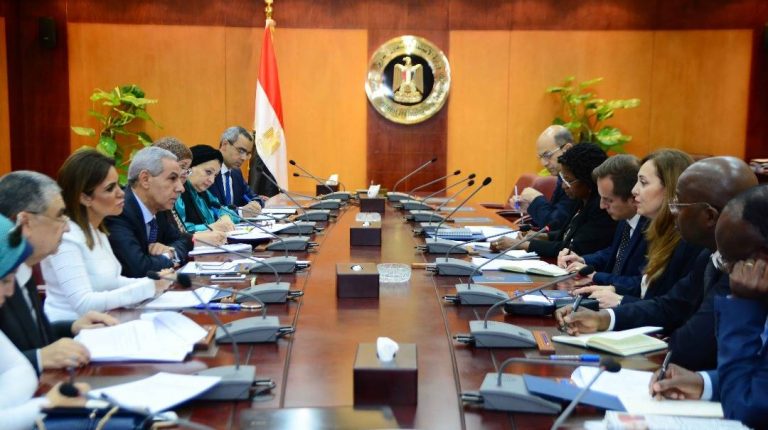 On Sunday, the ministers of electricity, investment and international cooperation, and industry and trade held a meeting with the African Development Bank (AfDB) delegation headed by Leila Mokadem, AfDB’s resident representative in Egypt, to discuss the third $500m tranche of the AfDB’s loan.

The AfDB granted Egypt $1.5bn to support the economic programme and the implementation of the development plans, of which Egypt received the first and second tranches worth $1bn.

Minister of Investment and International Cooperation Sahar Nasr presented the measures taken by Egypt to improve the investment environment, most notably the ratification of the Investment Law by President Abdel Fattah Al-Sisi, and the start of discussions on issuing the executive regulations of the law.

Furthermore, the cabinet approved amendments to the Capital Market and Corporate Law, and the Ministry of Investment and International Cooperation provided the service of online establishment of companies to be a new mechanism to facilitate investors.

Nasr stressed the need to speed up the procedures of signing the third tranche of the loan.

The minister pointed out that the current government’s priorities are improving the investment environment, providing a better standard of living for citizens, launching projects for women and poor people, in addition to establishing projects in the fields of infrastructure, such as electricity and transportation.

Minister of Trade and Industry Tarek Kabil presented the efforts exerted by his ministry in developing the infrastructure of the industrial sector in Egypt, as well as its vision to achieve industrial development plans during the coming period.

The minister pointed out that the government works to support the private sector and promote small and medium enterprises (SMEs).

Leila Mokadem said that the bank plans to end all the procedures of the third tranche to be ready to be signed before the end of current year.

AfDB’s mission to Egypt expressed its optimism about the economic reforms undertaken by the Egyptian government, pointing out that Egypt is currently in a good position to attract more investments.

Egypt received earlier in April the second $500m tranche of the $1.5bn loan package from the AfDB. In the same month, the World Bank delivered to Egypt the second $1bn tranche of a $3bn three-year loan to support the government’s economic reform programme, with the funds intended for fiscal consolidation, ensuring energy supply, and enhancing competitiveness in the private sector.

The government targets collecting foreign financing of $9bn next year