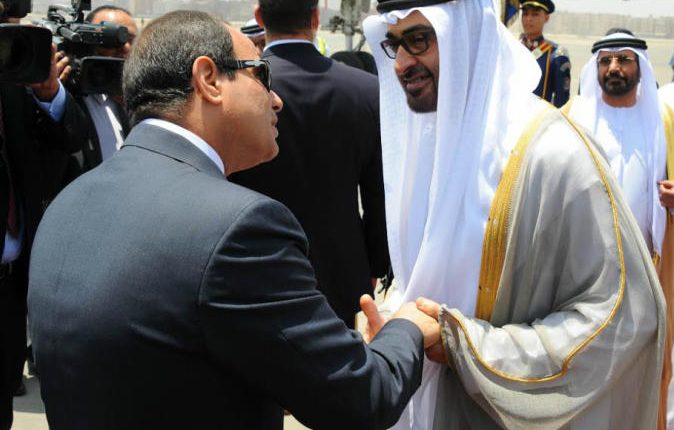 President Al-Sisi and the Abu Dhabi crown prince asserted the necessity of boosting cooperation between Egypt and the United Arab Emirates (UAE), and discussed their common interests regarding international and regional issues, according to the statement from presidential spokesman Alaa Youssef.

Both sides stressed the importance of coordination between all Arab countries and the international community to confront terrorism and stop sources of weaponry, fighters, and funding for terrorist organizations, as well as provide political and media coverage, the statement read.

The two leaders stressed the necessity of intensifying mutual Arab efforts for achieving public good for Arabs, and the necessity of reaching a political solution for the crises in some countries in the region to keep their unity and regional safety, along with reestablishing national institutions to restore security and stability.

Egypt has strong ties with the UAE, especially after Al-Sisi became the president of Egypt, and they are allies in different international and regional issues, such as the Libyan issue.

Two weeks ago, Egypt, Saudi Arabia, the United Arab Emirates, Bahrain, Yemen, and Libya’s eastern-based government, in addition to Maldives, cut their ties with Qatar, as the six Arab governments accused Qatar of supporting terrorism, supporting Iran, and disturbing security and stability in the region.