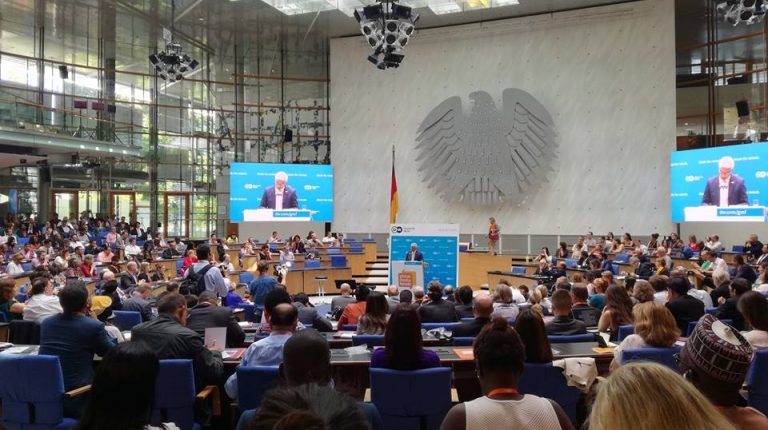 As the 10th Deutsche Welle Global Media Forum kicked off in Bonn on Monday—and will take place between 19 and 21 June—discussions brought a variety of topics of global concern and perspectives from experts around the world under this year’s theme “Identity and Diversity”.

He added that there is growing responsibility for objective and comprehensive reporting, which should always aim at informing listeners, readers, and viewers; enable them to make better decisions based on reliable information; and improve their understanding of the world.

“To make one thing absolutely clear, the media is not the enemy of the people. They are working in the people’s interests,” Limbourg stated while delivering a message to autocrats and dictators all over the world that they cannot oppress freedom of expression forever, because the latter is stronger.

“Any ruler who represses freedom of speech will fail in the long run. People want more than prosperity and security, they also want freedom and justice,” he concluded.

Identity and diversity in the age of populism

In a Monday session on “identity and diversity in the age of populism and religious extremism”, in which it was discussed how liberal, secular European societies are having a hard time accepting different religious, cultural, and ethnic diversity, partly in reaction to terrorist groups claiming to be religiously motivated.

According to André Gagné from the Montreal Institute for Genocide and Human Rights Studies and an associate professor at Concordia University, the result of terror attacks is more fractured societies and increased hostility towards Muslims shown in recent polls. “This is exactly the narrative used in jihadist propaganda, that the west hates Muslims. The point of this narrative is to cause more social division,” he said.

Meanwhile, Kyle Matthews, executive director of the Montreal Institute for Genocide and Human Rights Studies, emphasised the rise of right-wing governments and an extremist approach rejecting liberalism and perceiving it as a threat, raising the question of “where does fear of migration come from?”

Matthews pointed out a direct correlation between right-wing rhetoric and religious-inspired terrorism”, as “irrational” as it may be.

But to Gagné, such reactions to terrorism stem from ignorance. “People can’t distinct, for instance, between a Muslim integrated into society and a jihadist, and this causes irrational fears, given that terrorist attacks, for most part, are conducted by homegrown people,” he said.

To Laura Wagenknecht, a freelance journalist at Nuba Reports, the right-wing narrative is based more on easy straight solutions that don’t explore the deepest part of the problem. Laura, who has worked as a journalist in Sudan and the Nuba Mountains, said she has seen sources of conflicts between Christians and Muslims resulting in a crisis of identity mainly based on the non-embracing of such differences.

Managing diversity in a time of turmoil

How is it possible to manage diverse groups of people in times of increasing flows of migration and displacement? The topic was discussed in another session at the Global Media Forum on Monday as the speakers shed light on multiculturalism as a national policy in retreat, public demand for the better integration of minorities, and public debates on limiting immigration.

Josiane Khoury, a donor relations specialist at UNICEF, presented Lebanon as an example. Khoury stated that at least 1.5m people are displaced in Lebanon, most of them because of the Syrian Civil War. She added that there were 300,000 Palestinian refugees, considering such numbers to be among the highest rates in the world.

She explained that refugees were hosted by Lebanese families that eventually resulted in the impoverishment of the Lebanese people, the deterioration of an already-fragile infrastructure, and, thus, the rise of tensions and the fear of the unknown.

While Syrian refugees needed humanitarian aid, Khoury pointed out that UNICEF divided its aid between both sides, on one side assisting refugees and on the other assisting the Lebanese government to work towards a better environment for all citizens—for instance, pushing education for all children, regardless of their nationalities. The same thing could be applied to youth programmes.

“Nobody has the answer on how to manage diversity, especially given security concerns challenging pluralism,” argued Matthews. But he believes “civic nationalism” is key to building common identities. Matthews also called for what citizens can do as individuals, such as using social media in challenging extremism and increasing intercultural connections.

Jasdeep Randhawa, a fellow at Global Diplomacy Lab, argued that the media plays and should continue to have an important role in implementing innovative techniques to target minority groups and give them a voice, and at the same time address policymakers.