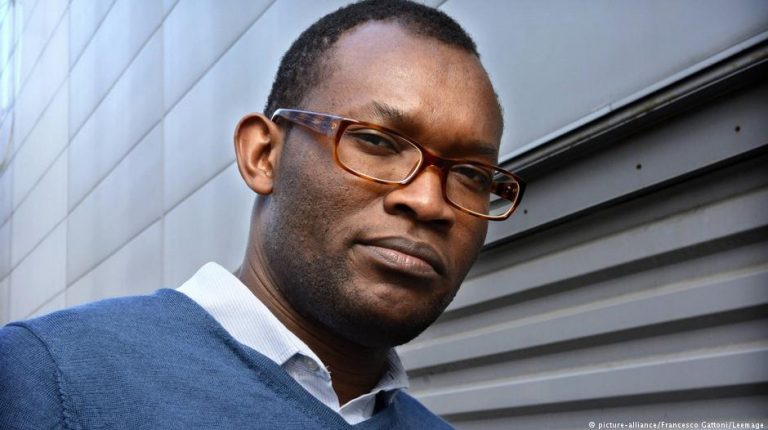 “Fiston Mwanza Mujila chants, roars, whispers sentences about everyday life in a male society dominated by violence with a radical furor, almost in passing narrating the tale of a crook and of the unlikely salvation of a doomed poet. The translators Katharina Meyer and Lena Müller have found a stirring language for the text that pushes towards the performative,” the jury wrote about the book they lauded as “rhapsodic” on their website.

Fiston Mwanza Mujila – who lives in Graz, Austria, where he teaches African literature at the university – will receive a prize of 20,000 euros ($22,300). Katharina Meyer and Lena Müller receive a prize of 15,000 euros for translating from the original French into German.

The novel is set in a fictitious mining town that closely resembles the DR Congo’s Lubumbashi, the capital of a region rich in natural resources including copper and diamonds.

“Tram 83” is the name of the jazz pub in the book, which is its own magnetic cosmos drawing in prostitutes, students, organ dealers and child soldiers. “Nothing special, really, this Tram 83. Everything black, like the caves of Lascaux. Men, women, childen, with cigarettes in their hands. Behind them a band unscrupulously maltreating a piece by Coltrane, probably ‘Summertime,'” writes Mwanza Mujila in his first novel.

Mujila was born in Lubumbashi in 1981, but had to flee when he began publishing. Now in Graz, he writes poetry, prose and plays, which he also translates into German. Much of his work centers around the political instability in the Democratic Republic of the Congo since independence. “Tram 83” is his first novel and also grabbed the pan-African Etisalat Prize for Literature. In addition, it was long-listed for the International Man Booker Prize and the Prix du Monde.

This is the ninth edition of the International Literature Award, given annually by Berlin’s Haus der Kulturen der Welt and the foundation Elementarteilchen, for international prose translated into German for the first time.

The ceremony for this year’s International Literature Award will take place on July 6 in Berlin, honoring author Mwanza Mujila and translators Meyer and Müller.

The other six on the shortlist and their translators will also be celebrated, including Hamed Abboud and Larissa Bender, Alberto Barrera Tyszka and Matthias Strobel, Han Kang and Ki-Hyang Lee, Amanda Lee Koe and Zoe Beck, Ziemowit Szcerek and Thomas Weiler, as well as Fernando Mires and Thomas Böhm.

South Korean author Han Kang, in particular, has a wide audience, having won the International Man Booker Prize in 2016 for her novel “The Vegetarian.”