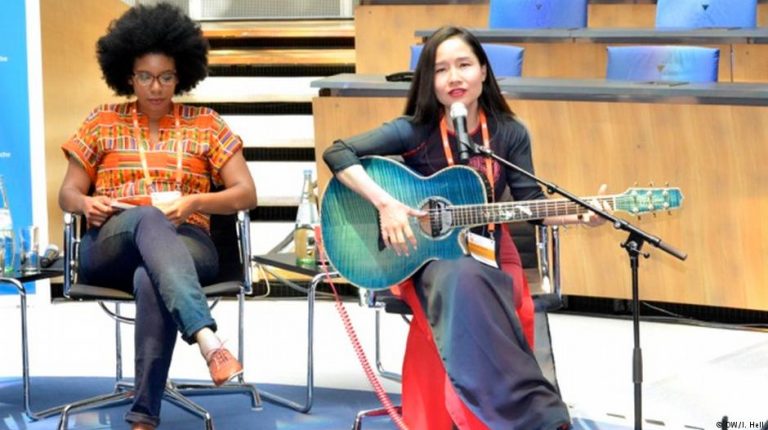 What does identity have to do with hairstyle? How can leisure attire open doors? And what does all that have to do with Beethoven? Answers to these questions were offered at a freewheeling panel in Bonn.”Identity is fluid, and there’s no such thing as local anymore,” says a tall man of Sudanese descent born in Romania, who learned his perfect English from American television shows and as a guest worker in Qatar. He also sidelines as a cartoonist. And if that were not enough to complete Khalid Alabaih’s credentials as a citizen of the world, he even ventures into another field: searching out the identities of Qatar’s guest workers. Although they constitute over 90 percent of the populace, these people of mostly southern Asian origin live on the outskirts of urban areas: unseen, anonymous and dressed uniformly during the work week.

But on their days off, Khalid Alabaih will ask them about their attire. At first they’re startled at being so accosted, says Alabaih, but then they begin to open up. Alabaih has been collecting images and stories, posting them on the Instagram project #DohaFashionFridays, demonstrating how cultural background interfaces with fashion statements, and how identity, suppressed at the workplace, suddenly erupts and flourishes when given the slightest chance.

Khalid Alabaih was one of six very different panelists from entirely different cultural backgrounds reflecting on “Culture. Identity. Diversity.” at the Global Media Forum in Bonn on Tuesday. M.C.’d by Susanne Spröer, head of DW’s Culture Online department, it offered a kaleidoscope of how globalization is generating diversity, sometimes in unexpected ways.

The panel was preceded by a performance from a petite Asian woman with a volcanic voice: Mai Khoi Do Nguyen has been called Vietnam’s Lady Gaga. No one could doubt her energy either on or offstage. After she nominated herself for the national assembly in her one-party state two years ago, police shut down one of her shows. Be it for her political activism, for song titles like “Selfie Orgasm” and “Re-education Camp” or simply for her gleeful flaunting of stereotypes, Vietnamese authorities have effectively banned her from performing in her home country. Performances outside Vietnam – mostly for exiles – and Mai Khoi’s presence on social media flourish, however. And she believes in the transformative power of music.

“There are over 200 political prisoners in Vietnam,” she told DW, “yet after last year’s environmental catastrophe (ed: a water pollution crisis affecting the coasts of four provinces), people still go back to protest every week.” Much has changed in the country in the past 10 years, says the LGBT rights activist, yet some things remain unachieved, including basic rights that are – still – taken for granted in Western societies, like freedom of speech and movement. In this context, Mai Khoi, who was permitted to meet with former US president Barack Obama in a visit to Vietnam that took place in early 2016 but seems eons ago, is cautiously optimistic about her society’s future.

More than just a fashion statement

Whereas stereotypes are beginning to be flaunted in Vietnam, they still determine fates in Africa, says Zodidi Jewel Gaseb. Speaking of society in her native Namibia, she says “Discrimination is based on hairstyle. Children are not allowed to wear dreadlocks or Afros.” Career-oriented women go to considerable expense and inconvenience to straighten their hair, often using toxic chemicals. When sporting her spectacular natural Afro hairstyle, Gaseb has found herself being treated as a drug user or a prostitute.

Not content to accept the social construct, the events management officer at the Namibia Business Innovation Institute shared experiences with other African women on Facebook and became an activist and an entrepreneur. Owner of the initiative African Naturals, Zodidi Jewel Gaseb is seeking the promotion of natural, African-based products for hygiene and fashion – assisting, in particular, women entrepreneurs.

The originality and chutzpah of Zodidi Jewel Gaseb and Mai Khoi are perhaps even outdone by Takwa Barnosa: The 19-year-old established an art foundation in Libya two years ago. In her own artworks, she finds open and uncompromising representation for the chaos, anarchy and the refugee crisis in her homeland. How can art heal a broken society? Barnosa – who is neither supported nor interfered with by governmental or religious authorities – prefers to concentrate on the tiny, single steps taken by individuals: a 10-year-old boy who, seeing the art of Vincent Van Gogh, obsessively occupies himself with the technique in one of the artist’s paintings, seeking to surpass it. Or an isolated artist friend whose contact with Barnosa’s foundation encouraged her to leave her comfort zone and expand her technique and use of color.

Much to be done in Germany too

Individuals, private initiatives, the transformative power of art, music and even fashion: How do these factors figure in Germany, which is proud of – and even flaunts – its culture? Even one of the country’s influential cultural authorities, Andreas Görgen, likes to subvert institutional structures with surprising initiatives. The head of the department of Culture and Communication at the Office of Foreign Affairs once invited a number of dignitaries to an evening of “German folk music” – then proceeded to confound all expectations by presenting performers from the Balkans, Africa and the Middle East. The point was clear: these cultures, too, are Germany.

Görgen finds the millions of euros spent on cultural activity in Germany misplaced, targeting only the top 10 percent of wage earners. And of its 200 theaters, only two are directed by persons with a foreign name or of color. A search for cultural diversity in Germany, said Görgen, must lead to its factory halls. Meanwhile, even an internationally renowned event like the Dokumenta exhibition in Kassel is completely unknown to a large segment of that city’s population.

Finally, cultural identity is embodied by a historical figure like Ludwig van Beethoven, who has long since transcended any initial identification with German or Austrian culture. That is the opinion of Nike Wagner, director of Bonn’s Beethovenfest. And unique among music festivals, says Wagner, is the event’s cooperation with Deutsche Welle in the annual campus project, which showcases classical music traditions from different countries each year in juxtaposition with Beethoven. Although fostered by two institutional identities, this too undercuts traditional cultural thoroughfares of communication – and generates new forms of expression.