Egypt ranked 105 in the 2017 “Global Innovation Index”(GII) moving two places from its 2016 ranking, while Switzerland still ranks as the top innovative country for the seventh year in a row. The Global Innovation Index ranks the economies of 127 countries or territories using an innovation performance score out of 100 points, based on the country’s institutions, human capital and research, infrastructure, market sophistication, business sophistication, knowledge and technology outputs, and finally creative outputs.

The results of the index, co-authored by Cornell University, French business school Insead and the World Intellectual Property Organization (WIPO), were officially announced during a press conference held on 15 June at the UN headquarters in Geneva.

In regards to Innovation Output Sub-Index and in the Knowledge and technology outputs, Switzerland performs best in comparison to other countries. Its lead seems largely uncontested. For the first time it ranks among the top 10 in all pillars and is the 3rd economy in the world in innovation quality.

The report indicates that Switzerland position withing the ranks, is due to their improvements in the areas of Institutions (where they ranked 8 globally), Infrastructure (with the 6 rank), and Creative outputs (ranking 3), while its Innovation Efficiency Ratio has improved from 5th to 2. Switzerland presents a few areas of weakness on the input side. Such as: ease of starting a business, graduates in science and engineering, gross capital formation, ease of getting credit, and growth rate of GDP per worker.

According to the report, the six key findings in 2017 are: the importance of creating new sources of innovation-driven growth, the need to overcome serious food challenges by smart agricultural innovation in developing countries, that more innovation convergence is required globally, leveraging the rise of new East Asia Innovation Tigers, to foster deeper regional innovation networks, prioritising the need to preserve the momentum of innovation in Sub-Saharan Africa, in addition to the fact that Regional clusters of inventive activity – such as Tokyo, Yokohama, Shenzhen, Hong Kong, San Jose- are essential to national innovation performance.

Moreover, in regards to regional rankings, in this year’s edition, Europe still dominates the top rankings, with 8 countries in the top 10 economies, and 15 in the top 25 global economies. The report concludes that these results are due to Europe’s strong stance in human capital and research, infrastructure, and business sophistication.

While for North America, the United States of America secured the 4 rank, and Canada was in the 18th spot. Which is an indicator to the particularly in market sophistication index, and intensity of venture capital activity, which acts as a driver to stimulate private-sector economic activity.

In the United States case, various factors have contributed to their rank, such as the existing high-quality universities and firms, which conduct global R&D, quality of scientific publications, software spending, and the state of its innovation clusters. While for Canada, they ranked high in the ease of starting a business and quality of scientific publications, and their exceptional political, regulatory and business environment draw top marks. However they lagged behind in improvement in its education system.

Furthermore, according to the report, China sustained its progress in the overall ranking, by securing the 22 spot, which make it the first ever middle income country in the top 25 ranking. China’s position came as a result to their high scores in business sophistication and knowledge and technology outputs, as well as their strong performance in the presence of global R&D companies, research talent in business enterprise, patent applications and other IP‐related variables. Moving on to Central and Southern Asia region, Central and Southern Asia, India, moving six ranks from 2016 index, secured the top rank in the region, and the 60 spot globally, outperforming on the innovation relative to its GDP per capita for the seventh consecutive year.  The report indicates that India ranks 14 globally in the presence of global R&D companies, performing better than the rest of lower- and upper-middle-income economies. India’s positive performance is due to its success in maintaining its 2nd position in both university rankings and citable documents among middle-income economies.

On the other hand the Islamic Republic of Iran ranked 2 in the region and 75 globally, with an exceptional performance in tertiary education, as well as ranking second in the world in number of graduates in science and engineering.

While in the Northern Africa and Western Asia region (NAWA), Israel and Cyprus achieved the top two spots in the region for the fifth consecutive year, with a global ranking for 17, and 30 consecutively. The report indicates that Israel has improved in various indexes such as: gross expenditure on R&D, as well as ICT services exports, in addition to maintaining its top ranks globally in researchers, venture capital deals, and research talent in business enterprise. 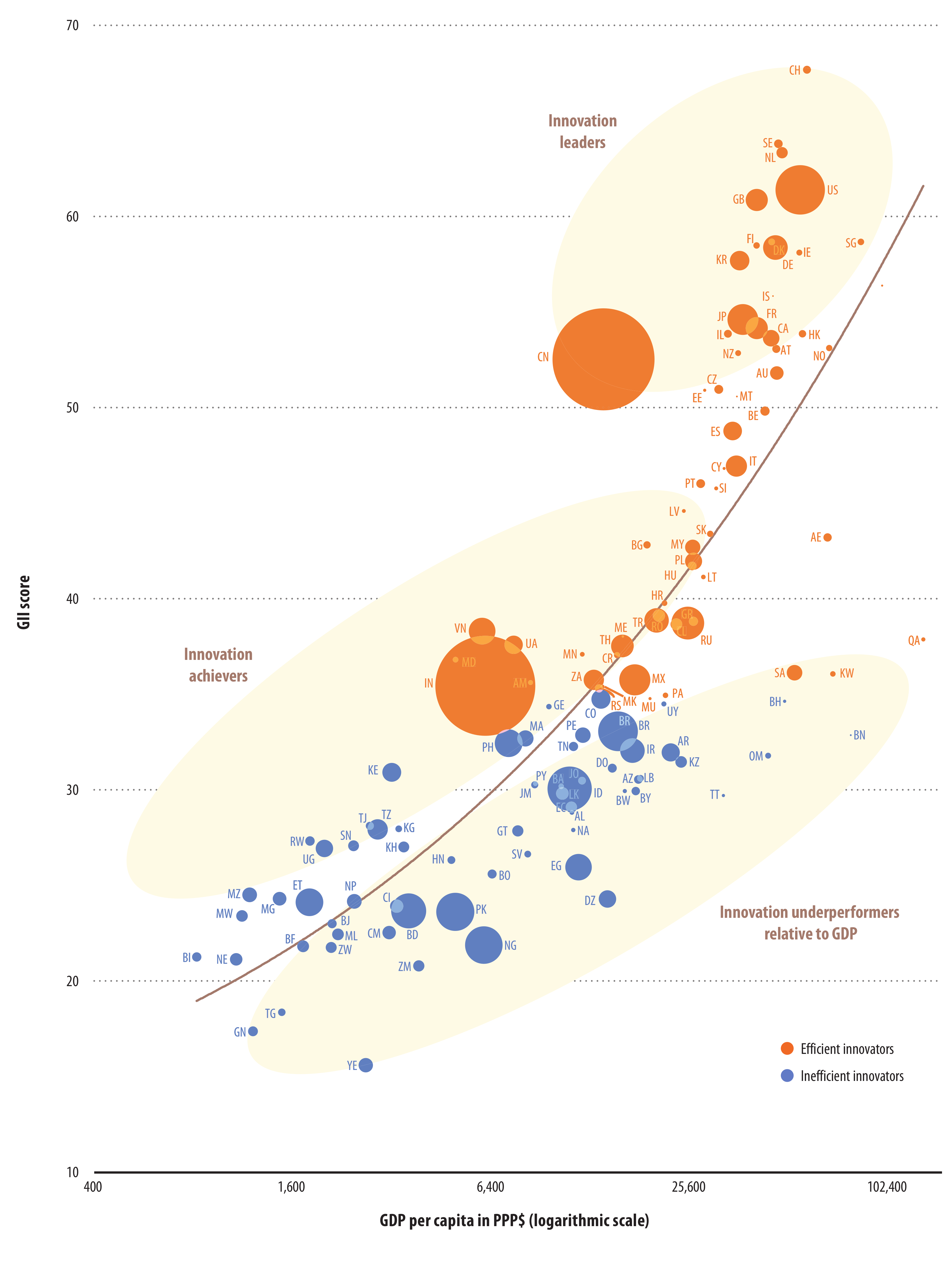 The report cites that, the largest economies in Latin America and the Caribbean region Chile, Mexico, Brazil, and Argentina show particular strengths in institutions, infrastructure, and business sophistication. Chile, which secures the region’s top rank for another year,  have shown good performance in areas of infrastructure, market sophistication, and knowledge and technology outputs.

However, the report indicates that the region’s GII rankings have not significantly improved relative to other regions in recent years, and no country in Latin America and the Caribbean currently shows any innovation out-performance relative to its level of development.

The Sub-Saharan Africa region, which draws its highest scores in institutions and market sophistication. As a result to the fact that economies such as Mauritius, Botswana, South Africa, Namibia, Rwanda, and Burkina Faso perform on par or better than some of their counterpart peers in Europe and South East Asia, East Asia and Oceania.

According to the report, closing the innovation divide between high-income and developing economies was the initial purpose of the index. The 2017 rankings singled out specific ‘innovation achievers’ that have grown relative to 2016 and contribute to the continual effort of overcoming developmental differences. In total, nine come from the Sub-Saharan Africa region, including Kenya and Rwanda, and three economies come from Eastern Europe.