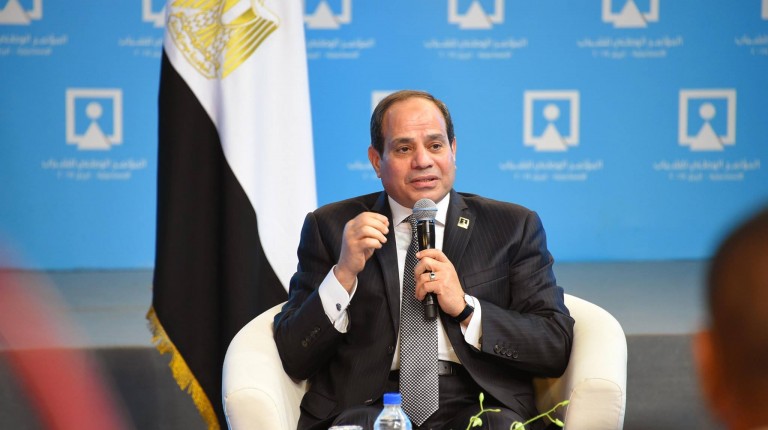 Egypt’s President Abdel Fattah Al-Sisi called upon leaders of the Nile Basin states to adopt a vision to use the common water resources depending on modern technology in order to reach the optimum way to benefit these resources, state-owned media reported on Thursday 22 June .

Al-Sisi asserted that the common interest of the Nile Basin countries is more important than any differences in views. During his attendance of the summit of Nile Basin countries in Uganda, the president called upon the leaders to work on avoiding the negative impacts of drought, assure water security for all basin states, and not negatively affect the life of the Nile River’s banks.

Also, Al-Sisi expressed Egypt’s readiness to host the upcoming summit next year, saying that the Egyptian people are proud of their African roots and support the exerted efforts to boost stability, peace, and development in the Nile Basin countries, asserting Egypt’s commitment to work for achieving peace and welfare for the region’s people.

“Egypt suffers from a water shortage recorded at 21.5 billion square metres annually. To fill this gap, we reuse water with 80% efficiency; this percentage is one of the highest in the world. For this, the Egyptian people deal carefully with any potential negative impact regarding Egypt’s water security,” Al-Sisi said.

The summit was to be held on 25 May, but Ethiopia said that it needs time to study the Egyptian proposal about the Entebbe Agreement.

President Abdel Fattah Al-Sisi headed to Uganda on Wednesday 21 June to participate in the long-awaited presidential summit of the Nile Basin countries, after three times of adjourning it in June and after the Ugandan president Yoweri Museveni’s repeated attempts for mediation and inviting presidents to the summit.