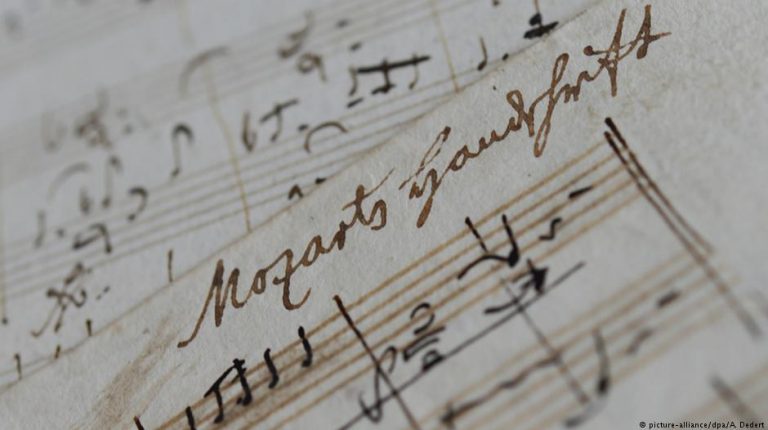 Many words have been spoken and much ink has flowed on the subject of the former chancellor and his place in history. But where words fail, music begins. With what message?For the funeral service at Speyer Cathedral on July 1, the musical selections authorized by Helmut Kohl’s widow Maike Kohl-Richter are pan-European. Apart from German church hymns, they extend from Gregorian chant to a work specially arranged for the occasion. Some of the selections have a symbolic meaning, some were of personal significance to Kohl, even though he was not a professed classical music aficionado. These are the pieces as heard by invited guests in the cathedral and by television viewers:

Johann Sebastian Bach’s “Toccata and Fugue in D Minor” was one of the former chancellor’s favorite pieces, played at his wish every time he visited Speyer Cathedral in a public or private capacity. Not only a favorite of Kohl’s, it’s the best known organ piece ever. The majestic sound, high drama, cascading scales up and down the keyboard, driving rhythms and thundering chords conjure up the most diverse images, such as a storm – though Bach himself made no known reference to the work, so it is not known whether he intended it to “mean” something. The Toccata and Fugue didn’t become well known until 1840, 90 years after Bach’s death, when Felix Mendelssohn performed it in Leipzig. By the beginning of the 20th century though, people considered it quintessential Bach. Yet in the 1980s, scholars began to doubt whether it was by Bach at all. Too passionate for Bach, said some. No, such a stroke of genius could only have come from Bach, said others. The fame of the work and the myth and mystery of it are reflected in the 48 links to further readings offered in the Wikipedia entry. Bach’s Toccata turns up in numerous films beginning with “Dr. Jekyll and Mr. Hyde” from 1931. Often it has been used to suggest evil or ominous situations. The most legendary use of the music in film comes at the beginning to Disney’s 1940 abstract animation film “Fantasia.” The word “toccata” incidentally is derived from the Italian word “toccare,” meaning “touch” – as when an organist touches the keys and pedals of his instrument.

“Requiem aeternam” as Gregorian chant: early generations of Christians sang their prayers. From the 5th to the 7th centuries, popes compiled sung melodies from Italy and France and designated them to various days in the church calendar throughout the liturgical year. Gregory the Great, Pope from 590 until 604, was the most active in this sense, thus the name “Gregorian chant.” For hundreds of years, it was sung by monks for an audience of one: God. Also called plain song, this form of composition is considered the foundation of all Occidental music. Today we have no idea of how it originally sounded. But interestingly, these melodies passed down through the centuries and normally sung today in gentle, wafting tones by male voices in acoustically bright spaces, repeatedly turn up in the pop charts – perhaps reflecting people’s longing for eternal values in our rushed day and age.

“Kyrie” and “Agnus Dei” from the Requiem by Maurice Duruflé is based, in the composer’s own words, “entirely on themes from the Gregorian Mass for the Dead.” The ancient melodies were incorporated into a work that was commissioned by the French government in 1941 during World War II and premiered six years later. With it, the very exacting and self-critical composer, whose output is small, created one of the fifty most frequently performed choral works today. Duruflé wrote his Requiem in memory of his father. The sound is warm, intimate and peaceful, celebrating both life and death with sumptuous harmonies and rich orchestration. The overall message is not of sadness and suffering but of gratitude, hope and consolation.

Johann Sebastian Bach’s “Fantasy in C Minor” is played after the sermon during Helmut Kohl’s requiem mass, recalling the fact that Kohl often listened to Bach’s organ and choral works in the Cathedral of Speyer. Bach’s music is often described as “universal” in that it far transcends German culture. That might be why it was selected to fit the memorial services for Helmut Kohl at the European Parliament in Strasbourg and at Speyer Cathedral, portraying the former Chancellor not as a German but as a European and a citizen of the world.

In the chorale “Christus, der ist mein Leben” (Christ, He is my life) from thecantata of the same name by Johann Sebastian Bach, the words go: “to die is my gain / to him I surrender myself / with joy I depart.” The overall theme is thus not death so much as resurrection.

From the Requiem by John Rutter, the “Sanctus” is performed in a version the English composer specially arranged for Kohl’s funeral and dedicated to his memory. Born in 1945, Rutter wrote it after the death of his father in 1984. Like Duruflé’s Requiem, the mood therein is peaceful and consoling. The booklet to the funeral ceremony describes the Sanctus as “a musical reflection of heavenly beings making music.” With his Requiem, Rutter, who lives in the US, created a work that is much loved worldwide. It was frequently performed at memorial services for the victims of the September 11, 2001 terror attacks.

“Lamb of God” from the Requiem by Maurice Duruflé: see above.

Mozart’s “Ave Verum Corpus” is sung at Communion during the memorial service for Helmut Kohl. Hardly a school or amateur choir anywhere that doesn’t know this work. It dates from 1791, Mozart’s last year of life, as does his Requiem, which remained unfinished. Whereas the Requiem sounds apocalyptic, the short choral piece is calm, simple, slow – and perfect. Our image of Mozart is of a fun-loving individual – as he indeed seems to have been. Nowadays we’re less aware of the fact that this composer was also very devout. In the words of biographer Alfred Einstein: “If ever there was a Catholic composer, then it was Mozart.”

César Franck: “Prelude, Fugue and Variation:” active in Paris, the composer based this work on a German form of music, the Prelude and Fugue. With his Romantic style and the profundity of his music, Franck is sometimes called the “French Brahms.” Not quite: he was of German-Belgian heritage, i.e., a true European.

Sergei Rachmaninov’s “Ave Maria” sounds out after the final prayer. Taken from Rachmaninov’s “All-Night Vigil,” it dates from 1915 and is based on the Russian Orthodox church music tradition. In the old nighttime ritual, the “Ave Maria” was sung at midnight, so in this piece, twelve bell strokes sound out. The choice of the work might point to the eastern part of the “European House” which Helmut Kohl considered his lifetime responsibility to build – and on which work is still incomplete.

Before being dismissed, the funeral guests will hear “Lobe den Herren, meine Seele” (Praise the Lord my soul) by Heinrich Schütz, a German composer – or was he really? Musically, at least, he was marked by his two-year study sojourn in Italy beginning in 1607. And in the middle of his life, he left Germany twice to work in Copenhagen. Another European, actually – as were most great composers.

After the Gregorian chant “In paradisum deducant te angeli” (May the angels lead you to paradise), guests will silently leave the cathedral.