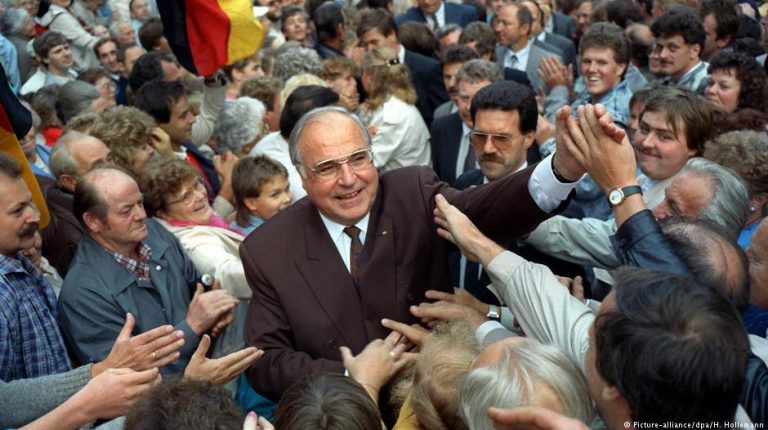 There are countless images of Helmut Kohl. But what overall picture did they produce? How was Kohl seen? What did he do to cultivate an image? Photo expert Klaus Honnef says Kohl was a master self-image manipulator.DW: Klaus Honnef, please tell us about the time you saw Helmut Kohl?

Klaus Honnef: I met him once when my wife and I were invited to an art exhibition at the Federal Chancellery – put on by [former Chancellor] Helmut Schmidt. He appeared a little later, came down a flight of stairs.

The moment I saw him, all the Kohl jokes I had in my mind died, for I had never perceived such a walking block of ice. I had not imagined him to be as huge as he actually was.

If you review the photos of Kohl, which one resonates the most?

Most of the images that have been buried in my memory reflect exactly the figure that I have seen in the flesh. His bleakness, but also his ability to scrutinize people by looking them in the eye. And also a great superiority, which he radiated not least through his body.

Take the famous photo of Kohl and Mitterrand on the Battlefield of Verdun. Is it staged?

Naturally it was staged. I’m convinced that almost all images of politicians are staged today. And this famous picture is not to be attributed to the authorship of Helmut Kohl, but to Mitterrand, who was also a brilliant performer in the public eye.

Helmut Kohl was also a brilliant performer. Since the time of Willy Brandt, politicians have learned to move as if they were being watched by cameras. They have developed qualities that great actors have.

In the idyllic image of Kohl with his wife Hannelore and his two sons, did the Chancellor succeed in expressing his political values?

Indeed. As we now know, the family happiness did not go as far as this image suggests. But every image that circulates in public and that’s put out by the person depicted has a certain symbolic power.

Pictures make politics – often much more than decisions. Such a photo showing family happiness, a good family man, corresponds with the images of power shown in many other images of Helmut Kohl. This is part of the overall picture. You do not want a cold, powerful politician. He should bring something human, and imply the warmth of a family man.

There are countless portraits of Kohl. How did he want to appear?

Always as a successful politician. For me one of the best portraits is by Helmut Newton, which he took in the Chancellery garden in Bonn. Helmut Kohl is in front of an oak tree. This is an image that symbolizes mutual understanding. The photographer’s gaze coincided with that of the Chancellor. This is a state portrait. But it is an artistic portrait because it is not suitable for official rooms.

Would you say Kohl was a master of media production, who brilliantly manipulated his own self-image?

The funeral ceremonies: the European state ceremony in Strasbourg, the transfer of his remains on a Rhine ship, the service in Speyer. Does all this fit into the picture as well? Would Kohl have liked that?

Absolutely. I was not really a Kohl fan, although I admire his achievements. But the fact that the German state is struggling with this former chancellor’s legacy, and that the President of the Federal Republic has not arranged a state funeral, that concerns me. Because Helmut Kohl was the chancellor of unity and is also a symbol of a Germany that is currently undergoing dramatic changes. And no one knows in which direction. To this extent, such a state ceremony would have produced a conciliatory effect. And I am convinced that Kohl would have liked it very much.

Professor Klaus Honnef, born 1939, is considered one of Germany’s preeminent art and photography critics, historians and curators. He is the co-author of “Art of the 20th Century.”