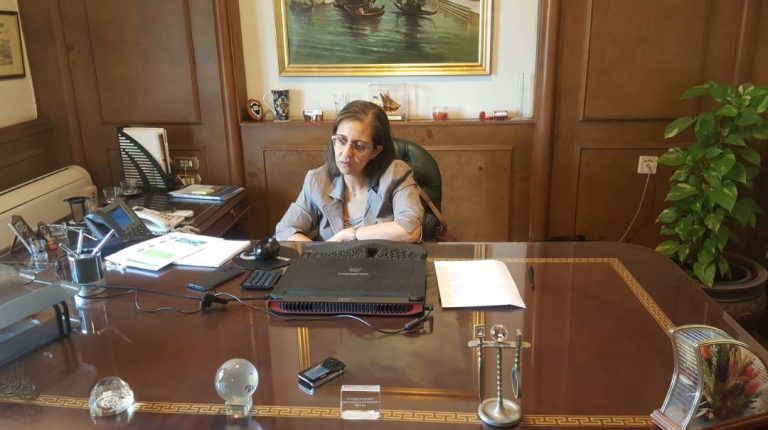 Chairperson and CEO of Egytrans Abir Leheta said that the Egyptian pound floatation had a positive effect on the company’s profits.

The Egyptian Transport and Commercial Services Company (Egytrans) was established in December 1973 under Egypt’s open-door policy. Egytrans provides an integrated transport in an easy, safe, and cost-effective manner. Egytrans has over time expanded its range and depth of services to allow it to effectively support industry and trade in the global exchange of goods through its various solutions and services in land transport, worldwide sea and air freight, project logistics, and supply chain management.

While based in Egypt, Egytrans has established a worldwide network of professional agents, enabling the company to serve customers and handle shipments to or from any location in the world.  With quality service in mind, Egytrans agents are carefully selected based on their track record, expertise, and commitment to maintaining the excellent level of service that Egytrans customers have come to expect. Through this worldwide network, Egytrans is able to offer global capabilities while maintaining the flexibility and personalised service of a local company.

Daily News Egypt interviewed Leheta to talk about the company’s business and the effect of the current economic circumstances on the transport sector.

What is the size of costs, revenues, and net profit during the first quarter (Q1) of 2017?

The rate of change in our financial metrics has been significant over the last twelve months. We continued to focus our portfolio around high-margin, high rate-of-return business, implement meaningful cost reductions across our business, and strengthen our financial position, while seeing structural improvements. Our first quarter results demonstrate this step change in the cash flow generating capability and financial sustainability of our business. The company has achieved revenues of EGP 111 million, up 282% y-o-y, and net profit after tax of EGP 20 million, up 234%, in Q1 2017 despite the challenging operating environment. As for costs, they increased 213.5% to EGP 61.6m—and selling, general, and administrative expenses increased by 24% to EGP 7.4m. Earnings before the interest, tax, depreciation, and amortization (EBITDA) margin recorded EGP 41.5m compared to EGP 3.3m in Q1 2016.

What is the targeted net profit by the end of 2017?

According to our budget plan, we targeted a net profit after tax of EGP 18m; however, we achieved more than this amount in Q1 2017. This surge was a result of the increase in sales of sister companies. Furthermore, the increase in the operations has led accounts receivable and accounts payable to surge by 67.5% and 49.5% respectively.

Does the flotation of the pound or increase in fuel prices have any effect on the surge in profits?

Fuel prices did not affect our profits; alternatively, the pound flotation had a positive effect on profit and increased the company’s operations.

After achieving the target profit of the whole year during Q1, what is your expectation of net profit by the end of the year?

I think that our financial results will be close to last year’s results. Last year, we achieved EGP 43m in our independent financial statements, and we expect to approach this level of results in 2017 due to the unprecedented volume of logistics projects, in addition to the company’s regular activities.

How does the flotation of the Egyptian pound affect the transportation sector?

Last year, the sector was affected by several factors, not only the flotation. The flotation led to a reduction in trade volume and also imports. The value-added tax (VAT) increased costs, and the delay in issuing the VAT’s executive regulation delayed some operations in the sector. Besides, fluctuations in worldwide maritime activities and trade affected the sector.

Meanwhile, these factors had a limited effect on Egytrans, as we had other factors that improved our financial performance, the most important of which is a big increase in our projects’ activities.

What are the company’s projects?

In 2016, we started a group of giant projects. The most important are Siemens’ two power plants in Beni Suef and the New Administrative Capital, with a total amount of EGP 90m; wind farms and electricity stations; and projects in oil and gas in the Zohr Gas Field.

At the same time, we are targeting new projects in power and renewable energy, but there is no clear timeframe yet on when these projects will be implemented. We are targeting to acquire three projects by the end of the current year.

What are the new capital investments that the company intends to pump?

The establishment of the fleet of containers transport. We have already purchased five vehicles as a pilot phase. In the beginning of the coming year, we will evaluate the project, whether to increase the fleet or keep it as it is.

What is the investment cost allocated for the project?

We allocated EGP 9m as an initial amount; the first phase, which will be implemented this year, is worth EGP 4m.

The company has signed a contract to transport equipment to El-Nasr Company for Fertilizer and Chemical Industries. What is the value of the contract and when does the project end?

The contract’s value is EGP 6m, and this entails transporting 50,000 tonnes of equipment. We have started the transportation process, and we expect the project to finish by the end of Q2 2017.

What are the challenges facing Egypt’s transportation sector?

There are different challenges facing the sector. One of which is the transport infrastructure, though the government has paid attention and engaged in efforts to develop that aspect. The legislative climate in the transport sector also needs more development to cope with international systems.There are no laws in Egypt that regulate multi-modal transport and online payments and transactions.

We also need more improvement in the technical system in ports and roads and linking them and controlling the goods. Furthermore, the biggest challenges that have affected the sector over the past several years are bureaucracy and communication between government bodies and the business community. In addition, there is the problem when the government makes sudden decisions without discussing it or its repercussions with stakeholders, which heavily affects the market.

What are the opportunities in the Egyptian transportation sector that may attract investors?

What is the size of budget for trainings for employees?

In the current year, we allocated approximately EGP 350,000 for training.

How does the slowdown of the volume of world trade affect the company and the sector in general?

Currently, we are concentrating on establishing our fleet in road transport, besides extending investment in equipment.

Does the company plan to increase the capital?

We are not thinking of increasing our capital in the current period.

What is the recent size of bank facilities obtained by the company?

We deal with different banks. In 2016, we had an agreement with Ahli United Bank to have a facility of EGP 35m as letters of guarantee and about EGP 20m working capital for projects’ implementation.

What are the problems the transportation companies face while transporting products or goods to Africa?

First, there are problems in the capacity of the infrastructure as there are no regular shipping lines for different destinations in Africa; however, currently greater attention has been paid to the establishment of the logistics areas in some countries to facilitate the transport process.

Were the company’s activities hurt or affected by the Arab Spring?

We don’t have big businesses with the Arab Spring countries. In Libya, however, we had a large transit business, and this was heavily affected by the Arab Spring. This lane is now almost at a standstill.

What is the effect of the New Customs Law in case it is issued on the sector?

The New Customs Law is still being studied by the government. The law has some good clauses, with a primary focus on increasing the rate of the customs duty payment and reducing the possibility of evasion or failure to collect fees. Moreover, the law has some positive items and procedures, like facilitating procedures for companies dealing with customs, such as reducing the period of subsequent review from 7 years to 5 years.

A subsequent review of clearance [post-clearance review] is a measure taken by customs to verify the authenticity and credibility of endorsements by examining the books, records, business systems, and commercial data of the concerned parties.

Furthermore, the law legalizes pre-clearance, which means that companies can finish many of the procedures of the process before the goods arrive in an effort to facilitate customs clearance procedures to reduce the time of receiving the goods. The new law reduces the tariff on industrial equipment and machinery from 5% to 2%. The new law combats evasion through a number of measures, such as suspending the evader for six months.