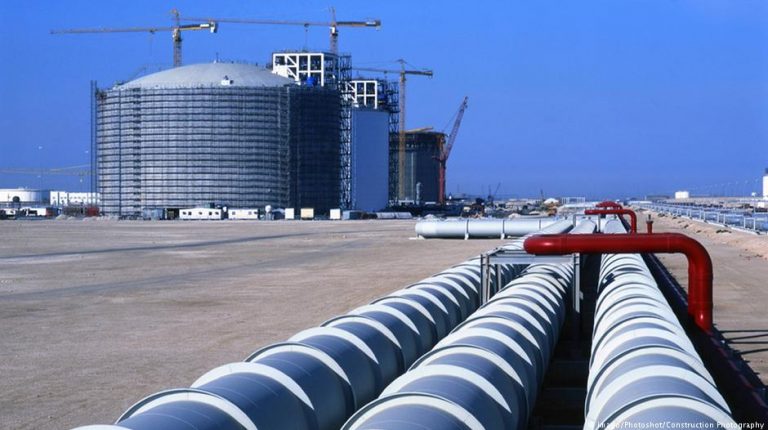 Despite a deepening diplomatic crisis with its neighbors, Qatar says it will increase natural gas production by a third. The announcement is seen as an act of defiance against sanctions by Saudi Arabia and others.The energy-rich emirate of Qatar confirmed Tuesday it intended to raise natural gas production to 100 million tons a year by 2024, as it seeks to portray an image of business as usual despite a bitter spat with its Arab neighbors.

The expansion was the equivalent of pumping an extra six million barrels of oil per day, Al-Kaabi added.

Analysts said the announcement was as much political as economic, as Qatar faces isolation by Saudi Arabia and other Arab states. Last month, its neighbors cut off diplomatic and economic ties, accusing Doha of supporting terrorism and siding with their regional arch-foe Iran.

The anticipated production increase follows a decision to double output from a new gas project on the
southern portion of the vast underwater North Field, which Qatar shares with Iran.

On Monday, Saudi and three other Arab states gave Qatar an extra 48 hours to meet their 13-point list of demands for lifting their sanctions.

They include downgrading ties with Iran, stopping support for Islamist groups, and shutting down the Doha-based broadcaster Al Jazeera and its associated channels.

Qatar has since given its response to the demands, but at the time of publication, they had not been made public.

In relation to the gas output hike, Al-Kaabi said Qatar wanted the increase to form part of a joint venture with international companies.

But Saudi Arabia and other neighbors have threatened to sanction any international firm that works with Qatar, which analysts said could limit interest.

“If there are no companies willing to work with us, we will do the 100 million tons,” Al-Kaabi insisted.

He said Qatar Petroleum’s plans have been unaffected by what he called a “blockade” by the Arab quartet, and there has been no change in the level of communication with Iran over the project.

German Foreign Minister Sigmar Gabriel is currently in the United Arab Emirates for talks regarding the crisis.

Gabriel was scheduled to head to Doha later on Tuesday afternoon, then to Kuwait – whose leaders are acting as mediator in the dispute – on Wednesday.