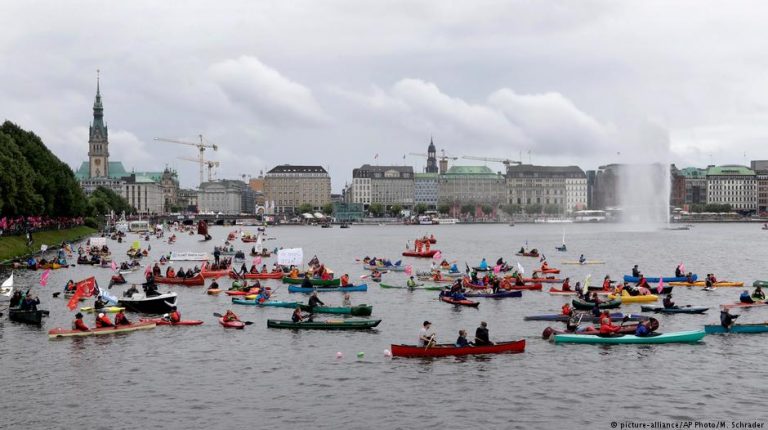 “Living without globalization?” That was the topic of a meeting of leading economists and politicians in the run-up to the G20 summit. The jury is out on this question, as Manuela Kasper-Claridge found out in Hamburg.”China and Germany are natural partners. We are both benefiting a lot from globalization,” Dr. Chen Han – the co-CEO of Ceinex, a financial services company and representative of the Shanghai Stock Exchange in Germany and Europe – tells DW in the historic Kaisersaal – or imperial hall – in Hamburg’s city hall.

On Saturday, the spouses of the G20 participants will visit, led by Joachim Sauer, husband of German Chancellor Angela Merkel.

“You are the first high-ranking guests this week,” Councillor of State of the Senate Chancellery, Wolfgang Schmidt, later tells the over 100 guests in the Kaisersaal.

Boundless growth, but with risks

“Living without globalization?” is the topic of the two-day conference hosted by the Hamburg Institute of International Economics (HWWI) and the US Bretton Woods Committee.

Among the participants are renowned economists, financial experts and politicians, including Dr. Han, who travels back and forth tirelessly between China, Asia and Europe to promote free trade.

The head of the Kenyan central bank Patrick Njoroge has come to Hamburg specifically to add an African perspective to the discussion.

“Globalization is driving growth as well as new technologies,” he says, adding that there are increasingly few barriers in the financial sector.

“We see an incredible speed of cross border innovations in the financial sector,” he says. That is also a result of globalization, he adds.

Njoroge, however, is concerned whether financial transactions can still be monitored adequately. After all, unlimited financial exchange holds risks as well, as does globalization in general, he says.

Globalization is designed to create net benefits for all, but it also creates losers, Italo Colantone, an economics professor at Bocconi University in Milan, tells DW. “But the welfare state is not effective anymore,” he says.

Economists tend to speak about the losers of globalization more openly. There are regions that suddenly become uncompetitive because production elsewhere is cheaper. Workers and employees no longer have jobs because their wages are too high by international standards.

The inequality created by globalization is not sufficiently compensated and wealth not distributed evenly. The results are growing discontent and economic as well as political nationalism, Colantone says.

He calls for stronger intervention by the state and “strong cooperation between public and private sectors.”

A dramatic loss of confidence in government institutions is already noticeable now, he says. “Joint infrastructure measures, education initiatives and the expansion of digitization for the benefit of everyone could combat that trend,” he says.

A lot of discussion and few solutions

But those who expect instantly workable solutions from the Hamburg conference will be disappointed.

There clearly aren’t any sure-fire solutions for more equitable globalization, most agree. On one hand, there are people, countries and companies who profit from boundless trade and become wealthier. On the other, there are the losers who see no benefit in a company like online retail giant Amazon expanding globally and generating huge profits, while their own company goes bust.

Economic problems, but not only

“We have a problem,” one participant puts it succinctly. “The problems of globalization are complex and not just of an economic nature,” another added.

For now, all of them will be looking towards the G20 summit.

Dr. Han for one is excited that Chinese president Xi Jinping is coming to Hamburg for the summit. He will speak in favor of open borders and the continuation of globalization, that much is certain.