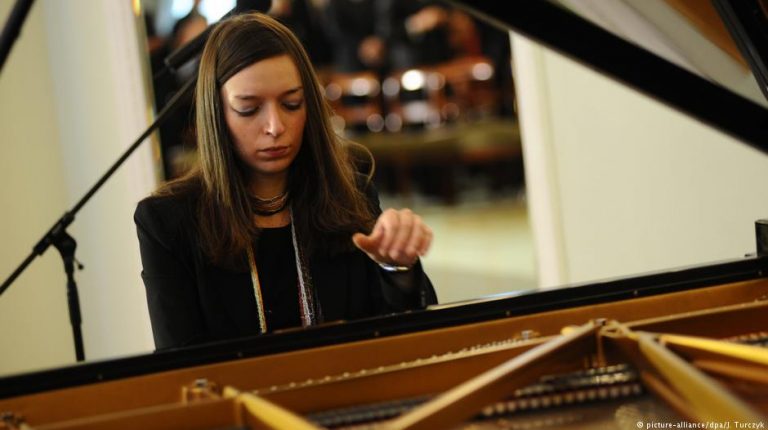 Yulianna Avdeeva is acclaimed for her perfect taste, enchanting piano sound and technical supremacy. Boris Berezovsky for a virtuosity so complete that it’s nearly incomprehensible. Both are Russian.”Yulianna Avdeeva is an artist who can truly make the piano sing,” wrote the music magazine Gramophone.

After winning first prize in the International Chopin Piano Competition in 2010, Avdeeva (seen above) embarked on a world-class career. We caught up with her at the storied Wartburg, a castle of Martin Luther fame that also became the backdrop for Richard Wagner’s opera “Tannhäuser.”

After Avdeeva’s rendition of the Beethoven sonata named “Les Adieux” from the Wartburg, it’s back to Bonn for more of Boris Berezovsky’s recital, part of which we heard in our last “Concert Hour.”

From the heights of civilization

Born in 1969 in Moscow, Berezovsky studied at that city’s music conservatory but didn’t graduate, deciding instead to participate in the renowned International Tchaikovsky Competition in 1990, which took place around the same time as his final exams. That might have been a wise decision: winning first prize, he didn’t look back – at least not at first. But at age 45, Berezovsky did in fact return to his alma mater, studied assiduously, passed his exams and finally earned his diploma.

He may look like a bus driver with the hands of a lumberjack, but Berezovsky is a hypersensitive artist, and he tends to demonstrate that regularly. His Bonn recital had a rather willful playbill: Beethoven, Chopin and Scarlatti, followed after the intermission by Bartok and Liszt. What was the underlying programming strategy?

“I like variety in the program,” Berezovsky told DW. “I don’t like programs that consist of only one composer or only of sonatas. I think that’s very boring for audiences. And this variety is very nicely presented in the program I play. It’s a mixture of different epochs, different styles, totally different composers, aesthetics and everything which we can allow from the heights of our age of civilization. We can allow this retrospective, which is very nice.”

Thus, from the heights of civilization, Berezovsky jumps from Bartok to Liszt in the music we’ll hear this hour.

performed by: Yulianna Avdeeva, piano
Recorded by Central German Radio, Halle (MDR) in the Wartburg in Eisenach on August 12, 2016.

Rebroadcasting rights: one broadcast before February 12, 2018.