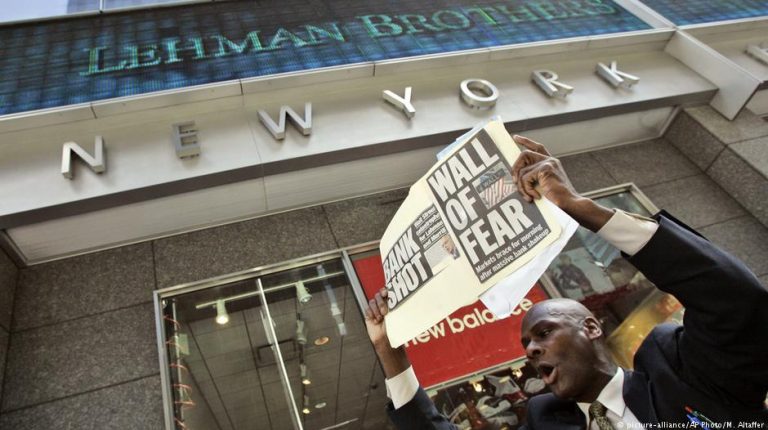 A decade ago, the subprime crisis began in the US, which a year later became a global financial crisis with the failure of Lehmann Brothers. DW explores what politicians and the financial world have learned?Everyone is smarter after the fact. But in April 2007 when the US mortgage lender New Century Financial went broke, and when in June two hedge funds from the investment bank Bear Stearns ran into financial difficulties, the revelations only interested specialists.

Nevertheless, by the end of July the subprime crisis, the mass defaulting of high-risk US real estate loans, had already arrived in Germany: The IKB bank in Düsseldorf had been speculating with subprime mortgages and had to be saved with taxpayer money and state guarantees.

“This was the beginning of the financial crisis for Germany, which was followed by many bailouts,” remembers Axel Weber, then president of the Bundesbank, Germany’s central bank, and now head of the Swiss bank UBS.

What has the financial world learned?

Fourteen months later, when the investment bank Lehman Brothers went bankrupt, it looked as if it would drag the entire financial world into the abyss.

“At that time, the German Bundestag passed a law in record time – the law to stabilize the financial market,” says Weber. They included: “480 billion euros in total. 400 billion as guarantees, and about 80 billion as capital injections for banks.”

A decade later, the world has still not fully recovered from the effects of the financial crisis. But did it at least learn from the disaster? This was the question at a recent event at the Frankfurt School of Finance.

Stable, but not stable

“At first glance, we have a more stable situation in the financial sector today,” said Herbert Hans Grüntker, head of Landesbank Hessen Thüringen (Helaba) and chairman of the Association of German Public Banks (VÖB).

“After a second and third look though, there are doubts whether it has really become more stable, as a glance towards our southern neighbors in the past weeks has shown,” says Grüntker.

At the end of June, the Italian government announced that two regional banks, which were struggling with bad loans, would be bailed out. The cost to the Italian taxpayer: around 17 billion euros ($19.2 billion). Also in June, Banco Popular in Spain was sold in a cloak-and-dagger operation – for a symbolic single euro, but at least without becoming a burden on the state treasury.

In Spain, “we were very lucky,” said Elke König, who as head of the European single resolution authority (SRB) took part in the late-night crisis meeting. The large Spanish bank Santander was “a willing buyer.”

Without their intervention, one could only imagine what would have happened to the financial markets the morning after the news broke. Analysts said authorities simply had no time for alternative solutions.

“You should not start such measures on a Tuesday evening, hoping to be finished on Wednesday morning,” said König.

The crisis is still not over

For Axel Weber, CEO of UBS, this time pressure is proof that the financial sector is far from being all right.

“We are still in the process of cleaning up the crisis, but we are not yet post-crisis,” Weber said. “The crisis will only be over when all bad assets are depreciated on the balance sheets and losses realized.”

It is still an open question how long that will take. Europe’s banks are suffering from the ongoing low interest rate policy of the European Central Bank, and the economy of the continent is drifting.

At least banks are now better regulated. However, the bureaucratic burden on banks is high. In 1988, the first international rules on capital requirements for banks (“Basel 1”) came to only 30 pages, according to Weber. The 2013 successor “Basel 3” was 600 pages, and the Dodd-Frank Act in America was nearly 30,000 pages.

“I’ve had the number of regulatory instructions we get every year at UBS counted,” says Weber, the head of the institute, which is active worldwide, “and it’s between 50,000 and 60,000.”

Nevertheless, banks should not now demand less regulation, said Martin Zielke, Chairman of the Board of Commerzbank. Instead, the different rules should be better coordinated, also on an international level.

However, the signs are not looking good for more coordination; in fact the opposite is true. US President Donald Trump wants to relax the requirements for banks again.

Zielke fears a “renationalization of regulation.”

“Hopefully things are not as bad as they seem,” adds Elke König. “Otherwise, we will just be going in a circle and then we’ll be back at the starting point,” in other words where we were before the crisis.

The G20 summit this week in Hamburg will perhaps give us an impression about the state of international communication. In the past, the summits were also forums for crisis management: the first time in 1999 in response to the Asian crisis, then in 2008 during the financial crisis.