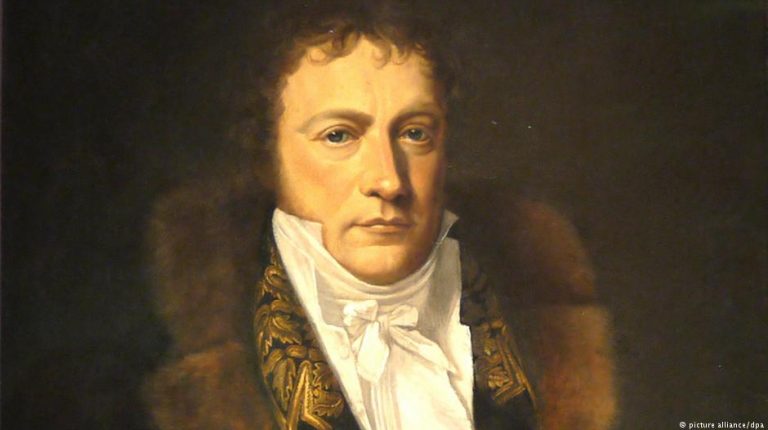 The last weeks have seen many commemorations to mark the 250th anniversary of Wilhelm von Humboldt’s birth. He is known as a philosopher and linguist, but he was also a lover of nature and had a huge impact on science.Though little remembered today outside of Germany, Wilhelm von Humboldt was an important Prussian statesman, thinker and scholar. Nonetheless, for him the name Humboldt was a double-edged sword and in old age he commented that he wished to be remembered as the “brother of the famous explorer,” a clear reference to his well-known brother, Alexander.

Born in Potsdam in 1767 to a wealthy and well-connected family, Wilhelm and his younger brother were educated together by private tutors. Already in his early teens Wilhelm knew German, Greek, Latin and French. Later he would study Chinese, Tartar, Arabic and Coptic among a dozen other languages, and publish the first studies of the Basque and Kawi languages.

Home life was divided between a townhouse in central Berlin and summers at Schloss Tegel, a relatively small country house set in a large forest near a lake eight miles from the heart of Berlin. It was here that his love of nature began.

At the age of 20, Wilhelm finally entered the public school system by attending classes at the university in Frankfurt an der Oder before transferring to Göttingen. After a brief stint working in the Berlin court system he married Caroline von Dachröden with whom he eventually had eight children, five of which survived into adulthood.

For the next ten years Humboldt had no fixed employment. He spent this time studying languages, and cultivating intimate friendships with polymaths Schiller and Goethe for whom he was an adept critic and supporter; the friendship with Goethe gave him new insights into the natural sciences.

When their mother died in 1796 Wilhelm and Alexander became truly independent. Wilhelm took over Schloss Tegel and other properties, while Alexander was satisfied with cash in order to pay for his planned trip around the world.

Though Wilhelm was now a man of the world with property to look after, it was still nature pure and simple that had his attention. He did not fanatically note barometric pressure or the height of mountain peaks like his brother, but he was nonetheless quite aware of his surroundings. His letters constantly mention clouds, the strength of storms, and above all trees.

In 1802, Wilhelm dutifully, yet reluctantly returned to state service and was sent to Rome to be Prussia’s representative at the Vatican. These years were some of the family’s happiest; but the Italian idyll was not to last. Another bigger task lay in front of Humboldt.

While Wilhelm was still in Rome, Napoleon was ravaging Europe. After he defeated Prussia in 1806, he marched into Berlin; Humboldt’s own home was ransacked. In panic the Prussian king fled with his court and government to safety in the eastern-most part of his kingdom and settled in Königsberg.

Defeat meant that the country lost around half of its territory and population. It was also forced to pay a debilitating 120 million francs retribution to France, not to mention support 150,000 occupying French troops.

The dire situation of the country forced its leaders to begin a series of administrative, social and economic reforms. The idea was to keep Prussia afloat long enough for it to recoup and – if everything went well – to get back on the path to greatness.

The reforms touched nearly every part of life: the abolition of serfdom, the limitation of aristocratic power, and changes to the military, tax and education systems.

French occupiers left Berlin in December 1808, but the king stayed away for another year. Thus in Königsberg the government-in-exile went about its work transforming a state that hardly existed and where the outlook was anything but certain.

It was under these painful and precarious circumstances that Humboldt was put in charge of dealing with eduction and ecclesiastical affairs within the ministry of the interior. After three months preparation in Berlin, Humboldt joined the government in Königsberg where he spent the next eight months, before the government finally returned to the capital proper.

By the time Wilhelm took up his job, some major decisions had already been made. Reformers were at the forefront and despite strained state finances had chosen to radically change elementary education throughout the country – or rather what was left of it.

No such measures had been put in place for secondary and higher education. Humboldt wasted no time getting to work. His plan was for a nation-wide three-tiered eduction system: integrating the already-changing elementary schools with secondary schools and a university based on humanistic values. General education was the key, while vocational and specialized professional training was to play a supplementary role.

Up to this point schools were typically under the jurisdiction of a town, patron or the church and teachers were often scarcely literate themselves. The nation needed to be reinvigorated and reimagined. It was essential to improve secondary schools; their focus going forward would be on teaching pupils how to learn.

To ensure success Humboldt implemented standardized instruction and state examinations for teachers, and installed a department within the ministry to oversee the creation of curricula and appropriate textbooks.

The University of Berlin – ‘The classical German research university’

At the beginning of the 19th century Prussia already had some universities – in Königsberg and Halle for example. But Humboldt wanted something entirely different. His university would not be there to teach what was already known, but to grapple with questions whose answers are unknown. He called this search for answers “Wissenschaft” – the wholeness of knowledge.

Besides a unity of science and scholarship, his vision also included:

Freedom of teaching and learning: Professors and students should cooperate when they chose and have great freedom to pursue learning in their own ways without a set curriculum.

Uniting teaching with unbiased independent research: University professors were not there to serve students. Both were there to form a community in search of science.

The primacy of “pure science” over practical professional training.

He also saw many advantages to creating an entirely new school in Berlin; most important were the many independent institutes already in the city: the botanical garden, the observatory, the collections of natural history and art. This combination seems obvious today, but was revolutionary at the time and helped usher in a golden phase of research – especially in the natural sciences.

With this in mind and despite nearly empty state coffers, the University of Berlin was founded under the auspices of King Frederick William III in 1809 and classes began in the autumn of 1810 with an all-male student body of 256. The state took over all the running expenses.

Back to nature at Tegel

After 16 months in office, Humboldt resigned in 1810. Yet he continued to serve Prussia and was appointed ambassador in Vienna and spent the next years negotiating various difficult treaties within Europe after Napoleon was finally stopped.

Prussia rebounded in size, population and importance. The reforms were starting to pay dividends and would eventually lead to a unified Germany – and with it the spread of Prussian ideas.

Finally in 1820, Humboldt’s time in government came to an end. After a 17-year public career with extensive travel and having lived in Berlin, Jena, Paris, Rome, Vienna and London, the 52 year old was ready to retire. After transforming his childhood home into a small neoclassical palace, he lived on the shore of Tegeler See for the rest of his life.

Here he found a renewed interest in nature, took daily walks and enjoyed his gardens, vineyards and his trees.

It was also at Tegel that Humboldt wrote over a thousand sonnets.

Many of these short poems are dedicated to nature and have titles like: The Ocean; Clouds, Dreams, Songs; The Comet; Clouds and Stars; The Oak; The Soul of Plants; Water and Fire; or simply “Nature.”

“He was at his best as a writer when nature, in one or the other of its innumerable manifestations, was his subject,” wrote Humboldt scholar Paul R. Sweet. “But he did not have Goethe’s aptitude, which he so admiringly had described, for looking at nature with the eye of the scientist. Humboldt valued natural phenomena, not for their objective substance, but for the moods and feelings that they roused within himself.”

In 1829, Wilhelm’s wife Caroline died at the age of 63. With his eyesight failing, Humboldt lived another six years in relative seclusion and died on April 8, 1835 at his beloved Tegel.

Amazingly, Alexander lived another 24 years, dying in 1859 at the astounding age of 89.

To his credit, Wilhelm like his brother, stuck to liberal principles his whole life. After seeing the direct aftermath of the French Revolution he pushed for a more representative government and restrictions on aristocratic privilege. He championed freedom of the press, due process and social mobility for all citizens regardless of family background.

Yet surprisingly many of his most significant writings that we know today were unpublished fragments when he died, all unavailable to his contemporaries. It was his daughter Gabriele and his brother Alexander who guarded his legacy, organized his papers and published many volumes of his work.

“In an age which often used the term ‘universal’ when it meant Europe, Humboldt was truly universal in interest and outlook.” He believe in “the intrinsic worth of every human personality… All cultures, advance and primitive, were appropriate to the attention of the historian. Universal history should be truly universal,” wrote Sweet.

A system built to last

Today, Wilhelm is viewed in many different and often-conflicting ways. Some see him as a hero of the common man while others see a patrician know-it-all who’s utopian principles of education were too impractical even when they were conceived.

In any event the ideas behind the “Humboldtian model of higher education” are far more complex and nuanced than the highly simplified versions that are often (mis)quoted and (mis)used today.

Not only that, but as time wore on Humboldt’s idea of Wissenschaft started to be understood as “specialized knowledge” rather than the “wholeness of knowledge.” Universities were also once again subsequently becoming seen as places for practical professional training instead of the final stage in a general education.

As universities grew Humboldt’s ideas did became too difficult to handle. The need for comparable qualifications and degrees made universities evolve, adding more rules and administrative layers.

Despite the fact that Berlin University developed in ways that diverged from what Humboldt had planned, it still became a model university. By the beginning of the 20th century, German universities were generally considered the best in the world. In the end, Wilhelm von Humboldt, the “other Humboldt” and unwavering idealist, must have done something right.