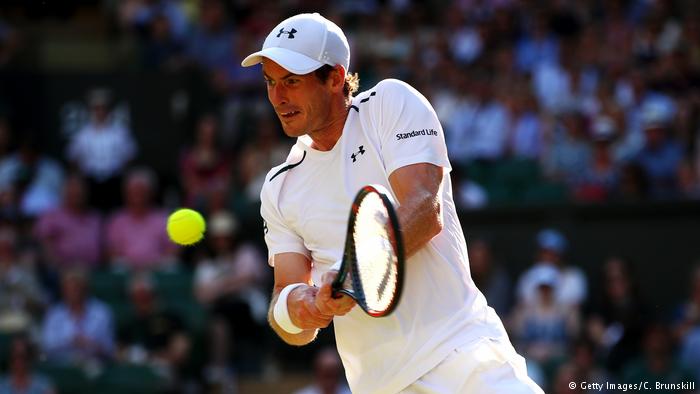 Germany’s Dustin Brown brought his unorthodox style to Centre Court but it wasn’t enough to stop reigning champion Andy Murray. Spain’s Rafael Nadal also progressed in the tournament.Reigning champion Andy Murray is through to the third round of Wimbledon after beating Germany’s Dustin Brown in straight sets, 6-3, 6-2, 6-2. Murray will face 28th seed Fabio Fognini of Italy in the last-32 on Friday.

Brown, who beat Rafael Nadal here two years ago, was hoping to capitalize on a hip problem which has been hampering the British number one, and he made it difficult for the home favorite with his unique blend of slices, drop shots and lobs. Indeed, in the first set, Brown hit more balls within the service line than anywhere else on court, much to the delight of the crowd.

But crowd-pleasing trickery only stretches so far, and Murray’s laser-accurate passing shots soon saw him break and wrap up the first set 6-3. Brown wasn’t fazed and stuck to his game plan in the second set, with the predictable mixed results. In the fourth game, clever shot placement had the British number one scurrying all over the court before Brown finished off at the net to lead 15-0.

Unfortunately, the same tactics backfired in the very next point and, despite appreciative applause from the stands, Murray went on to break twice and take the second set 6-2.

“Dustin came up with some great drop volleys and great returns, but once I got the first break, I started to read his game better and could see which shots were coming,” analysed Murray post-match.

Brown remains an ever-popular figure with the Wimbledon crowd but, as Murray wrapped up the third set 6-2, their thoughts will be turning to how far their man can go in this year’s tournament, and how his hip is holding up.

“My hip feels fine,” added Murray. “I’m moving well and I’ve been getting a lot of practise in. So far, I’m feeling happy with it.”

Spaniard and two-time champion Rafael Nadal got to the third round, winning 6-4, 6-2, 7-5 against Donald Young of the US.

Fourth seed Nadal will face the Russian 30th seed Karen Khachanov for a place in the last-16.

Best of the rest:

Romanian second seed Simona Halep got into the third round on Wednesday with a 7-5, 6-3 win over Brazil’s Beatriz Haddad Maia. Halep now faces either China’s Peng Shuai or Carla Suarez Navarro of Spain for a last-16 spot.