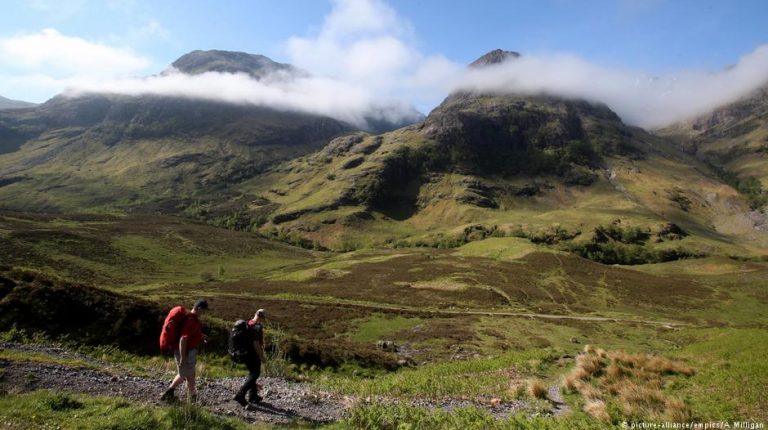 If you’re on foot, you really get up close to the the charms of the Scottish countryside. On the West Highland Way, walkers and hikers have the best possible conditions.Scotland’s first long-distance footpath, marked with a symbol of the local thistle, opened in 1980. It runs 154 kilometers from Milngavie, on the northerwestern edge of Greater Glasgow, to Fort Williams at the foot of Ben Nevis – at 1,344 meters, the highest point in the British Isles.

The trek can be demanding, for instance at the route’s highest point – at an elevation of 550 meters, the pass below Stob Mhic Mhartuin (706 meters). There are only a few kilometer-long steep ascents – no comparison to the Alps – but all the ups and downs add up to about 4,500 meters, almost exactly the height of the Matterhorn.

If you walk the path, it’s like viewing the Scottish scenery through a magnifying glass. It’s often rugged, with the exception of the offshore islands: the agricultural lowlands, lakes, waterfalls, bare mountain ridges, deep valleys and Rannoch Moor, the largest contiguous boggy moorland region in the country. In the 18th century, clan chief Robert Roy MacGregor led a tumultuous life on the shores of Loch Lomond, at nearly 40 kilometers, the country’s longest freshwater loch. The 1995 film “Rob Roy,” with Liam Neeson in the title role, virtually wallows in lush images of Highland scenery – perhaps one reason so many tourists head north.

Just under four kilometers north of Rowardennan, the Way leads past “Rob Roy’s prison,” a crag with a natural cave that he is reputed to have used as a hide-out after having been branded an outlaw.

Just outside Tyndrum, once a lead mining center, you encounter the story of St. Fillan. Fillan came to Scotland from Ireland as a missionary and was active there in the 8th century. Author and walking trail expert Hartmut Engel writes that he left many myths and romantic stories behind him.

Two of five relics attributed to St. Fillan are exhibited in Edinburgh’s National Museum of Antiquities: the silver head of a crozier and a bell said to have been used in healing rituals. Near Kirkton Farm, in a grove of trees, lie the moss-covered ruins of the saint’s chapel, admittedly part of a priory that was first founded in the 12th century. It took over 15 years for the idea of an uninterrupted signposted walking path to become reality. Negotiations with land owners through whose property the route runs were time-consuming. Engel reports that “existing trails were improved and secured, signposts set up and bridges built over brooks and rivers.” But there are next to no shelters, and because the Way mainly follows ancient drovers’ tracks and former military and coaching roads, there are scarcely any shops or cafés along it, with the exception of small shops at campsites. According to Scotish Tourism Alliance estimates, every year between 50,000 and 75,000 people walk all or part of the West Highland Way. The high season for walkers begins in July and runs until September, so hotel, bed and breakfast or youth hostel accommodation must be booked in advance. One advantage of opting for spring instead is the absence of the swarms of biting midges that are the scourge of the Scottish summer.