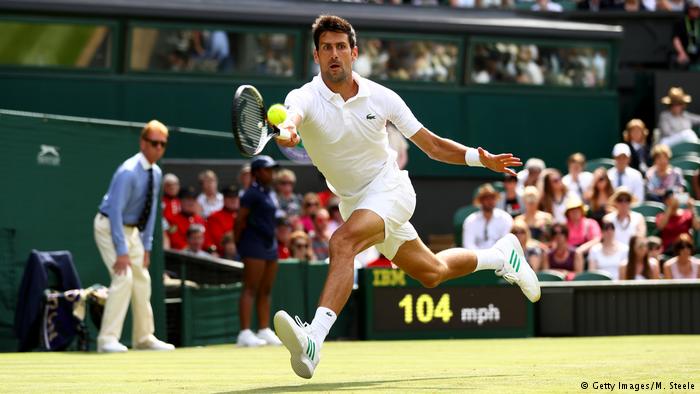 Novak Djokovic eased into the fourth round of Wimbledon after an early exit in the Grand Slam last year. Germany’s Angelique Kerber topped American Shelby Rogers to advance into the last 16.A year after his elimination in the third round of Wimbledon last year, Novak Djokovic was all smiles on Saturday after defeating Latvian Ernests Gulbis 6-4, 6-1, 7-6(2) on Center Court.

The second-seeded Djokovic, 30, will play Adrian Mannarino for a place in the quarterfinals.

“I’m delighted with the performance today. I thought I raised the level of tennis,” said Djokovic. “Comparing to the first couple of matches and the last couple of weeks I think this was the most focused I was on the court.”

The Serb lost to American Sam Querrey in the third round of last year’s tournament at the All England club. He lost his world number one ranking later that year to Andy Murray, who is the reigning champion at Wimbledon.

Djokovic has not dropped a set after losing in straight sets to Dominic Thiem in the French Open quarterfinals in May. He won the Eastbourne International leading up to Wimbledon in the meantime.

Big day for the younger Zverev

German Alexander Zverev will join Djokovic in the fourth round, the farthest stage he has ever reached at a Grand Slam tournament.

The 20-year-old German beat Austrian Sebastian Ofner in straight sets 6-4, 6-2, 6-2. He will play sixth seeded Canadian Milos Raonic in the fourth round as he hopes to make his first quarterfinal at a Grand Slam tournament.

Mischa Zverev did not fare as well as his younger brother. He got knocked out by Roger Federer, the seven-time Wimbledon champ winning in straight sets 7-6 (3), 6-4, 6-4.

After losing the first set and facing deficits in the second and third sets, Geman number one seed Angelique Kerber, a Wimbledon finalist last year, battled past Shelby Rogers to beat the American 4-6, 7-6 (2), 6-4 on Saturday.

“It was tough to find my rhythm actually, she played very well from the first point,” Kerber said.

The victory puts her in the fourth round in the Women’s bracket at Wimbledon, the fourth time she has reached that stage of the Grand Slam in her career.

The left-hander lost to Serena Williams in last-year’s final. With Williams sidelined as she prepares to give birth, Kerber could be on her way to win her first Wimbledon title.