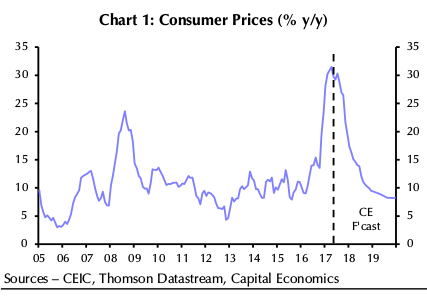 In an effort to contain the effects of the recent subsidy cuts, the Central Bank of Egypt’s (CBE) Monetary Policy Committee (MPC) decided in a surprise move on Thursday to raise the overnight deposit rate, the overnight lending rate, and the rate of the CBE’s main operation by 200 basis points (bps), or 2%, to 18.75%, 19.75%, and 19.25% respectively.

The CBE’s move hadn’t been anticipated by many of the surveyed economists, who had expected rates to be left on hold. At 19.25%, the mid-point of the policy corridor is now at its highest ever level, and has risen by 700bps since the fourth quarter (Q4) of 2016. 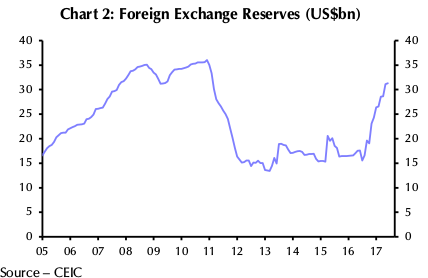 However, the accompanying statement suggests that the tightening cycle is now over and that the next move in interest rates is likely to be down, according to a Capital Economics report published on Friday.

Seven out of nine analysts and research centres at investment banks polled by Daily News Egypt before the MPC meeting predicted the interest on the pound to be kept unchanged by the CBE on Thursday.

According to Capital Economics, this prediction was based on various factors, including that the latest data shows that price pressures have eased, since the headline inflation had fallen from a 30-year high of 31.5% year over year (y-o-y) in April to 29.7% y-o-y in May, as the effects of the 50% drop in the value of the currency following the flotation started to fade.

Moreover, the recently released balance of payments data showed that Egypt’s external position has improved, the report cites. Egypt’s current account deficit continued to decline in fiscal year (FY) 2017/18, registering at $3.5bn in Q1, against $5.7bn in the same period in FY 2016/17.

According to the Capital Economics report, the improvement was due to the increased competitiveness of Egyptian firms due to the currency devaluation, which led to an increase in exports accompanied by a reduction in imports, as well as the fact that foreign investors have started to return.

In the CBE’s accompanying statement, the MPC highlighted that the move to raise rates came as a response to concerns over the inflation outlook, as the balance of risks surrounding the inflation outlook has tilted more strongly to the upside with the recent economic and monetary developments.

In late June, the government announced a hike of fuel prices by up to 55% as part of its ongoing fiscal consolidation efforts laid out in the adopted economic reform programme. On Thursday, a fresh rise in electricity tariffs was also introduced.

Consequently, the recent energy subsidy cuts prompted policymakers to take action and ensure that the inflation outlook is consistent with achieving the targeted disinflation path. The statement emphasised that the rate hike was aimed at tackling second-round inflation effects related to these subsidy cuts.

According to a report published by HSBC, there is some comfort to be drawn from the aggressive CBE stance to curb price growth and contain inflation, as it looks like the CBE is determined to re-establish its credibility in targeting inflation in the context of the broader economic reform programme, especially with inflation running at close to 30% y-o-y and likely to gain further when the June data is released next week.

“But we are not persuaded that the rate increase will have a meaningful impact on price growth driven by supply-side increases in administered prices, particularly given decelerating private consumption and negative real credit growth, which had already looked set to ensure that any pickup in inflation was short-lived,” said the report. 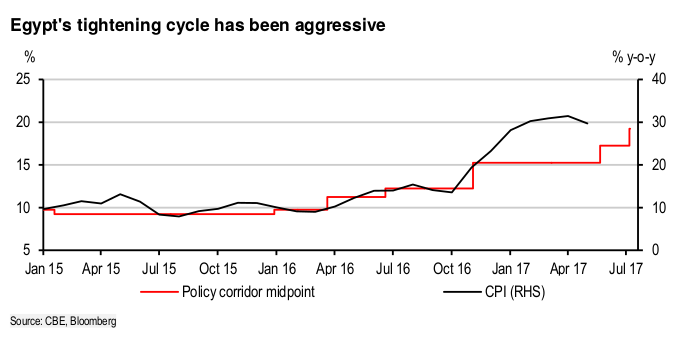 However, the hike will impose a significant additional fiscal burden—some estimate it to register at EGP 30bn—yet it may accelerate foreign inflows into the Egyptian debt market, adding to the upward pressure on Egyptian currency.

On the other hand, FX gains (increase of the US dollar value against the Egyptian pound) would have a more immediate impact on inflation than the rate hike, according to a report from HSBC. The analysts in the report restated their concerns that FX gains would risk impeding current account rebalancing that still has a long way to run and would be vulnerable to reverse, given the short-term nature of the portfolio inflows. However, they continue to believe that the CBE’s tightening cycle has peaked and look for rates to fall as headline inflation eases late this year and into 2018, and as the policy focus shifts to growth.

Moreover, though, the MPC also signaled in their statement that this latest rate hike is likely to be the last in the tightening cycle. According to the Capital Economics report, it envisages a “measured easing of the monetary stance” once “underlying inflation starts to moderate.”

The report cites that subsidy cuts mean that inflation is likely to rise in the very near term. By Capital Economics analysts’ estimates, they will directly add 1.5% to the headline rate. However, over the next six to nine months, this is likely to be more than offset by the unwinding of last year’s sharp drop in the pound.

The Capital Economics report concludes that from their point view, the headline rate will drop sharply towards the end of this year, close to the CBE’s end-2018 target of 13% (+/-3%). The report indicates that this is likely to prompt the central bank to start cutting rates, and that they envisage a prolonged easing cycle over the next couple of years. Capital Economics forecast that the overnight deposit rate will fall to 12.75% by the end of 2018.

Value of Egyptian exports to the United States reached EGP 10.6bn in 2016: CAPMAS

Berlin-based SoundCloud lays off almost half its staff