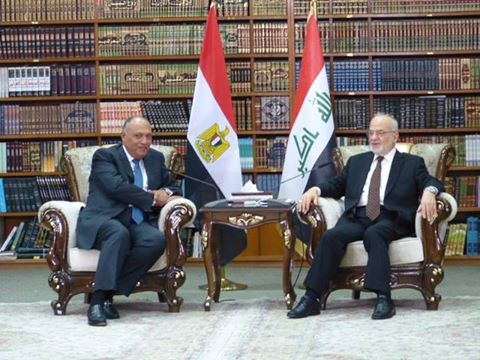 Minister of Foreign Affairs Sameh Shoukry asserted on Sunday Egypt’s commitment to support Iraq’s battle against terrorism during a telephone conversation with his Iraqi counterpart, Ibrahim Al-Gaafari, according to a statement.

The conversation follows an announcement by the Iraqi television on Sunday stating that the army has “fully liberated” Mosul from Islamic State (IS) militants.

Shoukry and Al-Gaafari further discussed means of enhancing bilateral cooperation between the two countries and coordinating their stances towards regional issues to be presented in international occasions.

Preparations for a diplomatic round of meetings between the two countries are currently taking place, said the Egyptian Ministry of Foreign Affairs spokesperson in a press statement.

Egypt has expressed its support for the Iraqi fight against terrorism several times. In April, Egyptian President Abdel Fattah Al-Sisi asserted his commitment towards supporting Iraqi unity and sovereignty, as well as the efforts that aim at restoring security and stability in Iraq, during his meeting with the head of the Iraqi National Alliance, Ammar al-Hakeem.

Mosul was the largest city taken over by the IS group and marks the place where IS leader Abu Bakr Al-Baghdadi gave his first and only televised speech in Al-Nur Mosque, announcing the establishment of an “Islamic Caliphate” in 2014.

The Iraqi armed forces fled Mosul in 2014 when IS first attacked.

In October 2016, Iraqi Prime Minister (PM) Heidar Abadi announced in a televised statement that “the battle against Mosul had begun”, with US and international coalition-backed military forces made up of of Sunni, Shiite, and Kurdish fighters, according to the BBC.

Although footage of military members celebrating the victory was aired by different broadcasters around the world, military forces are reportedly still fighting IS members in Mosul.