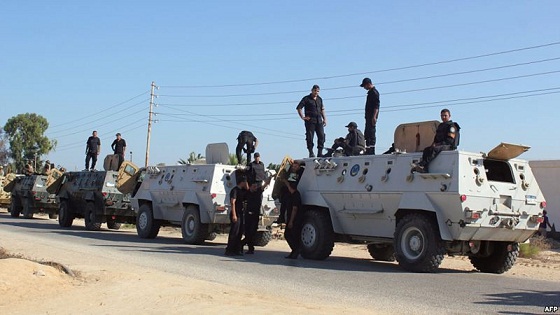 One conscript was injured Tuesday in an explosion in North Sinai’s Al-Arish, local media reported.

The bombing targeted an armed personnel carrier (APC). No details of the bomb were provided by officials.

The conscript is from the forces of the North Sinai Security Directorate and was taken to Al-Arish military hospital.

The bombing also injured two civilians who were passing by when the incident happened. Ministry of Interior is intensifying security measures in the area of the attack, while explosives experts are sweeping the area for bombs, according to news reports.

Meanwhile, the Egyptian parliament approved on Monday the extension of a nationwide state of emergency for an additional three months, said House of Representatives Speaker Ali Abdul Aal.

On Saturday, a bomb attack on a police checkpoint, also in Al-Arish, killed two policemen and injured nine security personnel.

On Friday, a suicide bomber stormed into the military post in the village of Rafah in North Sinai, killing and injuring at least 26 military personnel.

Hundreds of Egyptian soldiers, police officers, and conscripts have been killed since 2013, when the Islamist former president Mohammed Morsi was ousted after mass protests.

There has been no immediate claim of responsibility for the attack until now.

Ansar Beit Al-Maqdis group declared its affiliation to the Islamic State (IS) group in 2014 and has since then launched deadly attacks on army and police checkpoints.

Throughout the last two years, the Egyptian armed forces launched counterattacks against militant stationing points across the Sinai Peninsula, where the group is based, particularly in the cities of Sheikh Zuweid, Rafah, and Al-Arish.