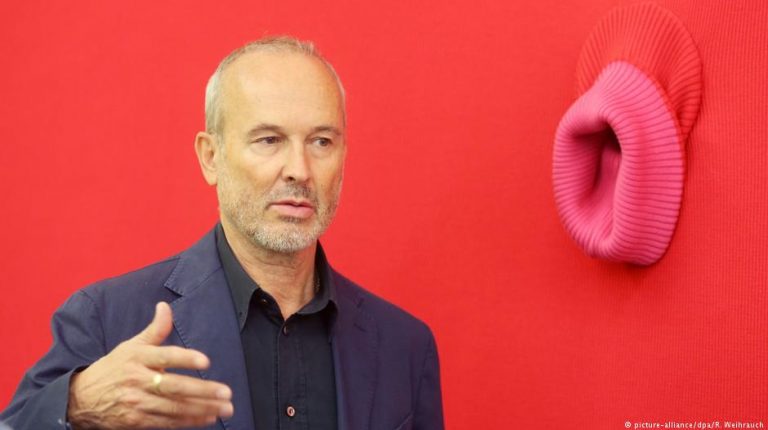 Fat Porsches, thick bellies, walls of knitted fabric: Austrian artist Erwin Wurm’s sculptures are surreal, philosophical and always full of wit. A double exhibition in Duisburg presents his works.It’s still cool outside as the morning sun hides behind the gray cloud cover hanging above Duisburg’s harbor. To the right of the entrance to the red brick Küppersmühle Museum of contemporary art stands an impressive sculpture: an oversized, bright orange boxing glove. It’s typical Erwin Wurm, I think, and evokes a fleeting memory of another large vertical sculpture – an oversized hot water bottle known as “mother” (which Wurm created in 2014).

Inside the exhibition space, it is calm but busy before the storm. It’s the last day before the official press conference, and the exhibition isn’t quite ready. A few things had to be changed at the last minute – the spontaneous wish of the artist. A whole wall had already been completed, but a majority of the small embroidery is now on the floor.

The master of irony

The artist is yet to arrive, but curator Jörg Mascherrek is checking that everything is in the correct place. We cross huge, empty rooms that are ideal for presenting Wurm’s large-scale works.

Elastic knitted fabric in spring green and light pink, reaching 5.2 meters (17 feet) in height, runs along a long wall. Ten workers aided by forklifts were required to erect the work. A total of 420 meters of the material was handcrafted in Thailand, the curator tells me – a smaller version, only 40 meters wide, has already been shown in Bangkok.

When Wurm arrives, he is friendly and attentive during the short greeting. But he is also restless. The tall artist rapidly crosses through the extensive exhibition in the Küppersmühle Museum. The brief statements with which he casually answered the journalists questions are delivered with a shot of Austrian irony as he relates some astounding details from his life as an artist.

Wurm, for instance, was constantly broke during his early career. His sculptures were made up of cheaply found objects and waste materials – among them discarded bits of wood, sheet metal and old underwear. Worm shows us one of the early sculpture boxes from the 1980s that reveal a pair of gray ski underpants.

For 25 years, the Austrian sculptor has been further developing his “open” sculpture concept that is infused with much humor and self-irony. “I find it interesting to see what happens when we remove the utility of everyday objects,” he told DW. Some, like the “Fat Car,” are repeated at this show. But Wurm is always good for surprises.

In Duisburg, Wurm has a book in a small cabinet, yet every page has been glued to the surrounding four walls to create a kind of word sculpture.

The result of this supposed self-experimentation – of course this weight gain was only staged for artistic effect, admits Wurm – hangs as a large-format, two-part photographic work in Küppersmühle’s entrance area. “He and Me” is Erwin Wurm in life size. Meanwhile, a dated pale blue plastic chaise lounge sits in front of the work. “It had to be exactly this blue. We found it in Rudi’s Dollar Shop here in Duisburg,” laughs Macherrek, the curator.

Success through struggle – and humor

Erwin Wurm is always searching. He struggles with himself and his art – no matter that he’s long been a very well paid and highly successful artist. “It’s about the difficulty of mastering life, no matter if it’s a diet or philosophy,” he said in a statement.

Having studied sculpture with German artist Bazon Brock at the University of Applied Arts in Vienna, Wurm has since become one of the world’s leading international artists. Artfacts.net lists the Austrian 17th on its global artist ranking, well ahead of Richard Serra, Damien Hirst, Jeff Koons, and even Anselm Kiefer.

Wurm’s air of nervous tension is also somewhat professional. As he moves quickly through the other exhibition rooms in the Lehmbruck Museum – the second venue for his Duisburg double exhibition – his artist’s eye rarely lingers longer than is necessary to ensure everything is in place. As he rearranges two small pink sculptures, he notes that the lighting lacks sculptural depth.

The famous sculptor seems to be in constant dialogue with himself and his environment. He likes to emphasize that his work’s Austrian humor and deeper meaning is also political. He repeatedly skewers the perceived arrogance of the status symbols featured in his work.

The speedy trip through the complete exhibition is over. But Wurm isn’t satisfied with the architectural features of the Lehmbruck Museum, saying the annex is too cramped. In response, the sculptor erected a strikingly huge wall piece: Wurm himself as a self-confounding art object on photographic wallpaper.

Wurm provokes with passion. His sculpture “Anger Bumps” already triggered heated discussion during its construction in Duisburg. The artist was pleased. But that is not the point. Technically, these sculptures are also extremely challenging, Wurm lets us know. “My ‘Fat Car’ for example: If the craft is not perfect, then it’s better not to do it.”

The “Erwin Wurm” exhibition runs through September 3, 2017, in the MKM Museum Küppersmühle and through October 29 2017, in the Lehmbruck Museum in Duisburg.