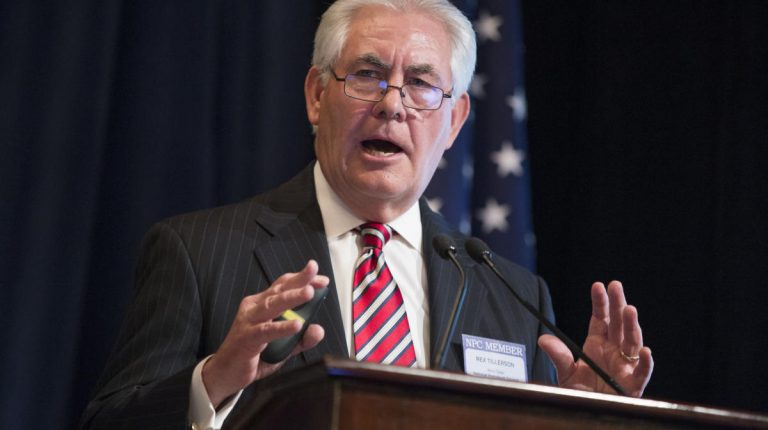 US President Donald Trump, the US Secretary of State, and the Pentagon have been making contradictory comments to the crisis since its beginning.

On Tuesday, the United States and Qatar signed an agreement to confront terrorism financing, during the US Secretary of State Rex Tillerson visit to Doha to end the Gulf dispute, which started more than a month ago.

Professor of Political Science at the American University in Cairo Noha Bakr said that the United States under Trump works for its own benefits and that Trump focuses more than any previous US president on  internal affairs. She added that, despite the mixed position of the US, Trump is working to end the dispute, as the US has a big military base in Doha and Washington depends on it.

On 5 June, Egypt, Saudi Arabia, the United Arab Emirates, Bahrain, Yemen, and Libya’s eastern-based government, in addition to the Maldives, cut their diplomatic and travel ties with Qatar. The six Arab governments accused Qatar of supporting terrorism, supporting Iran, and disturbing security and stability in the region, charges that Doha denies.

Qatar’s Foreign Minister Sheikh Mohammed bin Abdulrahman Al Thani said that the signing was “not related to the recent crisis and the blockade imposed against Qatar. Qatar is the first country to sign a memorandum of agreement with the US, and we call on the countries imposing the siege against Qatar to join us as signatories to this deal.”

Tillerson said that the agreement was under discussion months ago and boosts the spirit of the Riyadh summit. “The US has one goal: to drive terrorism off the face of the Earth,” Tillerson added. Also, he told reporters in Doha that the Qatari government had reasonable views in the diplomatic crisis with its neighbours, and it has been quite clear in its positions.

In a joint statement, the four Arab states that imposed boycotting Doha said that the agreement between Qatar and the United States to counter terrorism financing is insufficient.

In the first day of the crisis, Tillerson urged the Gulf countries to resolve their differences. Tillerson added during his visit to Australia on Monday that stability in the Gulf Cooperation Countries is important for the United States.

The US military said that its military base in Qatar (Al-Udeid) will not be affected by the Qatari-Khaliji rift. “We’ve seen no impact to our operations and all flights continue as planned,” Lieutenant-Colonel Damien Pickart, a spokesperson for US Air Forces Central Command, told Reuters. Also, he expressed the United States and the (anti-Islamic State of Iraq and Syria, US-led) coalition are grateful to the Qataris for their enduring commitment to regional security.

Qatar hosts Al-Udeid airbase, the largest US military base in the Middle East.

In contrast with previous US positions, Trump accused Qatar of its involvement in terrorism financing and praised the measures taken against Doha in a series of posts on Twitter just one day after the beginning of the crisis, saying, “[d]uring my recent trip to the Middle East I stated that there can no longer be funding of Radical Ideology. Leaders pointed to Qatar—look!”.

“So good to see the Saudi Arabia visit with the King and 50 countries already paying off. They said they would take a hard line on funding extremism, and all reference was pointing to Qatar. Perhaps this will be the beginning of the end to the horror of terrorism!” Trump added.

Despite Trump’s tweets, the Pentagon said it is grateful to Qatar for support of US military presence and enduring commitment to regional security.

Bakr believes that the recent agreement between Qatar and the US could be a supporting the position of Doha in the crisis and maybe there are undeclared deals between the two.