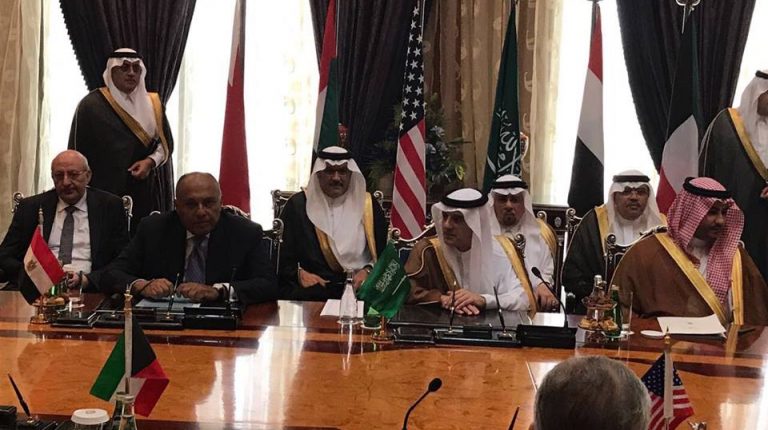 The foreign ministers of Egypt, Saudi Arabia, the United Arab Emirates (UAE), and Bahrain met on Wednesday with their US counterpart Rex Tillerson to discuss the latest disputes with Qatar.

The meeting follows Tillerson visit to Kuwait on Tuesday and the signing of a memorandum of understanding (MoU) to combat financing of terrorism, as part of the US and Kuwaiti concerted efforts to end the boycott that the four countries imposed on Qatar since June.

The four countries asserted on Tuesday that the signing of the MOU to combat financing of terrorism between the US and Qatar was “not enough” to end the boycott, according to joint statement published on Saudi News Agency.

“The signing of an MoU on combating the financing of terrorism between the United States and the Qatari authorities is the result of the repeated pressures and demands over the past years by the four countries and their partners to stop its support for terrorism,” the statement read.

On Monday, the four countries commented on the alleged leaked documents of the Riyadh Agreement and the 2014 Riyadh Supplementary Agreement, signed by leaders of Saudi Arabia, the UAE, Bahrain, Kuwait, and Qatar, saying that they proved Qatar’s lack of commitment to the previous agreement, which included similar articles as the latest 13 demands.

On 23 June, the four countries listed 13 demands in order to lift sanctions over Qatar, including the removal of the Turkish military base in Qatar, which Qatari authorities refused doing.

Meanwhile, the Qatari ministry of defence announced on Tuesday that the fifth batch of Turkish forces arrived to Qatar, adding that it was proceeding the bilateral military training which started since June 19, according to ministry press statement.

“This military cooperation between Doha and Ankara comes in the context of supporting efforts to fight terrorism and extremism and maintain stability in the region,” the statement read.

Turkey’s president Recip Tayip Erdogan said on Tuesday that Turkey wanted to “promote dialogue and peace” in the Gulf region, adding that “Turkey is never in favour of Muslims killing Muslims in this region,” during his interview with BBC.

Turkey announced support to Qatar since the boycott began in June. “We will not abandon our Qatari brothers,” Erdogan said, during a speech to members of Turkey’s ruling party Justice and Development.

In a similar context, Egypt’s Ministry of Foreign Affairs (MFA) spokesperson Ahmed Abou Zaid called on Tuesday upon the International Alliance Against the Islamic State organisation to reconsider the membership of “some states” that support terrorist organisations.

Abou Zaid’s statements during the International Alliance Against the Islamic State in Washington meeting are in context with Egypt’s latest statements in international occasions to gain support to the decision to boycott Qatar, although most of the statements do not mention Qatar directly.

“The field victory of IS, as much as its importance, should extend to end all extremist and terrorist organisations, as well as the hands, that are no longer unknown, who support such organisations to survive, whether by providing money, arms, political and media coverage, or a safe haven. In this context, the decision of Egypt, Saudi Arabia, the United Arab Emirates and Bahrain to boycott Qatar, a member of the Alliance,” Abou Zaid said.

Abou Zaid also questioned the support by some of supporting media platforms such as Al-Jazeera network, “which glorify and sympathise with acts of terrorism, in the name of freedom of expression.”

On 5 June, Egypt, Bahrain, Saudi Arabia, and the UAE announced cutting diplomatic ties with Qatar and shutting airfield and ports to all Qatari means of transport, accusing it of supporting and financing terrorist organisations and interfering in the policies and affairs in Gulf states.

Qatar denied all the accusations, asserting that they have been committed to the previous Riyadh Agreement, and considering the 13 demands as interference in its sovereignty.