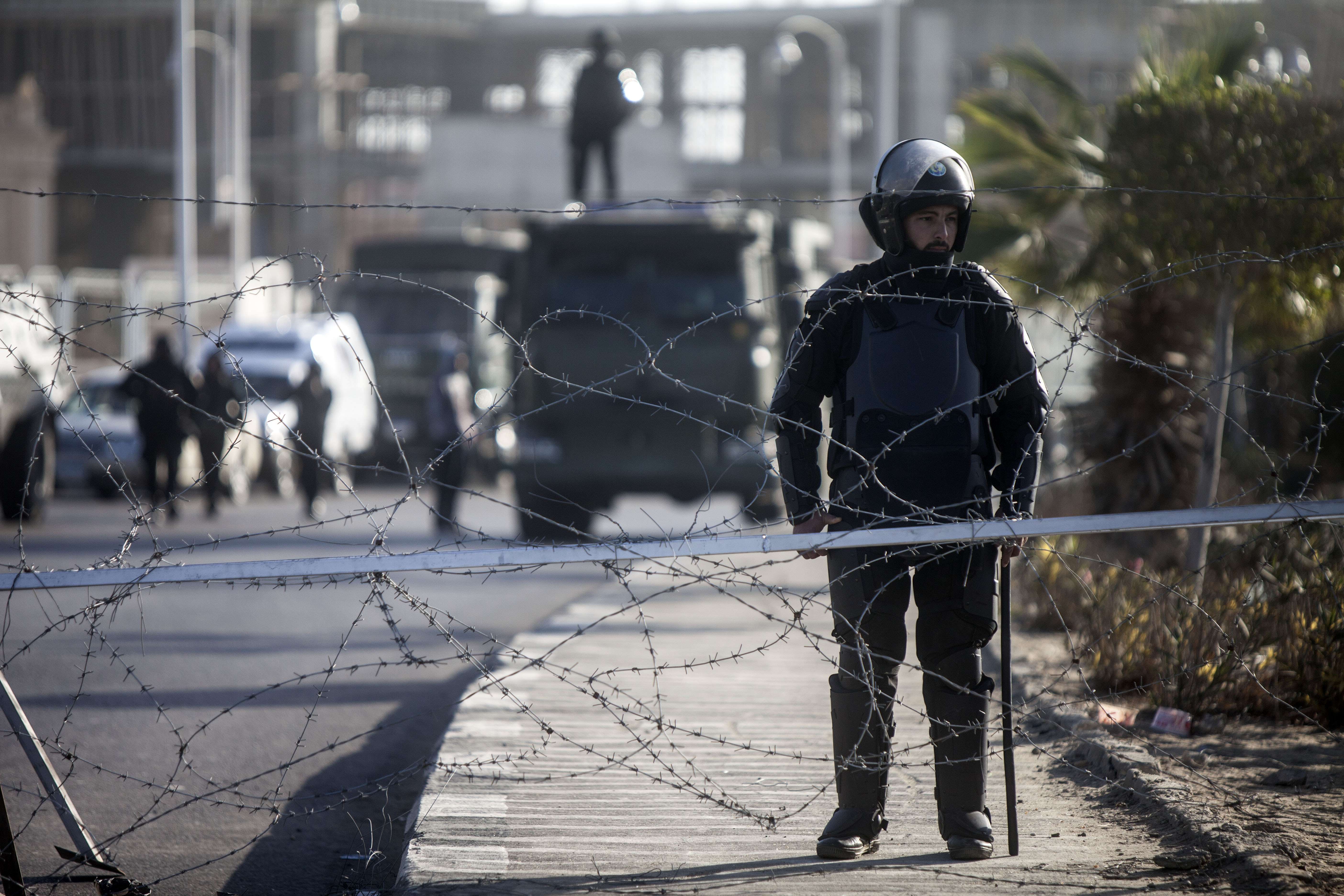 Five policemen were killed Friday in an ambush as militants attacked a security squad in the city of Badrashin in Giza. The assailants used a motorcycle to execute the attack.

The five victims were three conscripts and two low-ranking officers.

The Badrashin prosecution started an investigation and ordered the forensic medicine department to investigate the crime scene. The prosecution will receive a report from the National Security Apparatus about the incident.

The preliminary investigations found out that around 60 bullets were fired at different sides of the car.

A video circulated online that showed the attack through a CCTV camera. The footage showed that the alleged attackers parked their motorcycle on the side of the road and waited for the police car near a speed bump. After that, the attackers ambushed the car and fired at the personnel inside. The assault took around 1.5 minutes. The footage also showed the assailants stripping the policemen for their equipment, before setting the car on fire.

Hours before the video was circulated, the Ministry of Interior released a statement that said clashes with the militants lead to the killing of the five policemen.

Security forces have positioned security check points in the vicinity of the attack. No militant group has claimed responsibility as of yet.

The Badrashin area witnessed similar attacks with the same technique.

In October 2014, assailants fired at a security squad in the same city, while trying to escape arrest; however, no injuries among police personnel were reported.

In September 2015, a conscript was shot dead and a police officer injured, as unknown assailants opened fire at a police convoy near Badrashin. The patrol had been sent to check on the status of security in area, which falls under the jurisdiction of Badrashin’s police station on the Cairo-Assiut road. The assailants shot at the convoy from inside a crop field before fleeing the scene.

In February 2017, a police officer was killed in a drive-by shooting at a checkpoint on the Assiut highway in Giza. The attack, which left two other officers injured, took place also in the town of Badrashin. Similar to Friday’s attack, it was executed by unknown assailants on motorcycles, using automatic firearms.

The similarity between the attacks has called upon security experts to question the effectiveness of stable checkpoints, claiming that it it easy to target them, as they are left without cover from all sides.

The experts also pointed out that several of these militant attacks have taken place on Friday, capitalising on the fact that the day is off and that the relatively low traffic allows attackers to flee the crime scene fast and easily.

Shootings that target police, army officers, and state officials have become a near weekly occurrence in Egypt since the ousting of former Islamist president Mohamed Morsi in July 2013.

Although militant insurgency has been predominantly active in North Sinai, militant attacks targeting public facilities as well as police and army facilities and personnel have spilled out of the volatile peninsula, often in the form of drive-by shootings and improvised explosive device (IED) attacks.