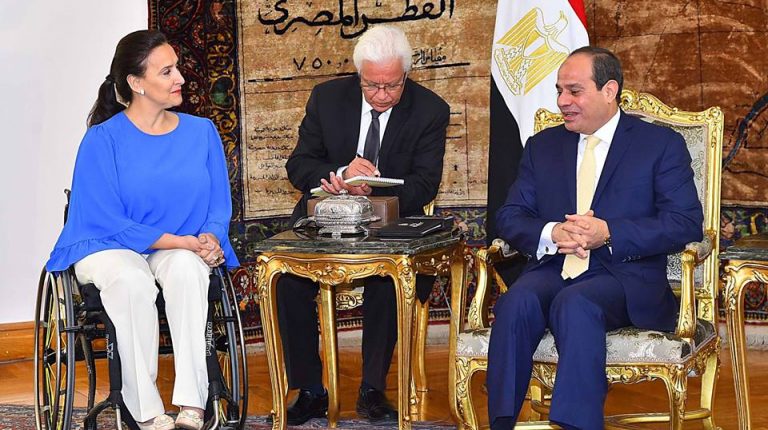 President Abdel Fattah Al-Sisi received on Sunday Vice President of Argentina Marta Gabriela Michetti at the Ittihadiya palace during her official visit to Egypt. According to the presidency’s statement, Al-Sisi welcomed her, expressing Egypt’s keenness in developing relations with Argentina.

The visit comes 70 years after the launch of diplomatic relations between Egypt and Argentina.

Al-Sisi praised the Argentinean parliament’s ratification of the free trade agreement between Egypt and Mercado Común del Sur, expressing hope that the agreement be implemented. Also, he stressed the importance of activating the trade and economic committee between the two sides and working on boosting the economic cooperation and achieving equilibrium in the balance of trade, which is $2bn, according to the statement issued by presidency spokesperson Alaa Youssef.

Michetti asserted her keenness on visiting Egypt, as it is a pivotal country regionally and internationally, expressing her country’s wish to intensify cooperation with Egypt. She also praised the economic reform measures in Egypt, saying that Argentina had a similar experiment and achieved progress in comprehensive development, according to the statement.

Minister of Foreign Affairs Sameh Shoukry also met with Michetti and discussed ways of developing bilateral relations, especially in economic and commercial fields, amid Argentina’s presidency of the G20 in 2018, as well as coordination and consultation in the international forums, according to Ministry of Foreign Affairs spokesperson Ahmed Abu Zeid in an official statement.

The two sides agreed to exchange technical delegations to implement development projects and discussed the positive impacts of the economic reform in Egypt. The visit of Michetti comes as preparation for a coming visit to Egypt by President of Argentina Mauricio Macri.