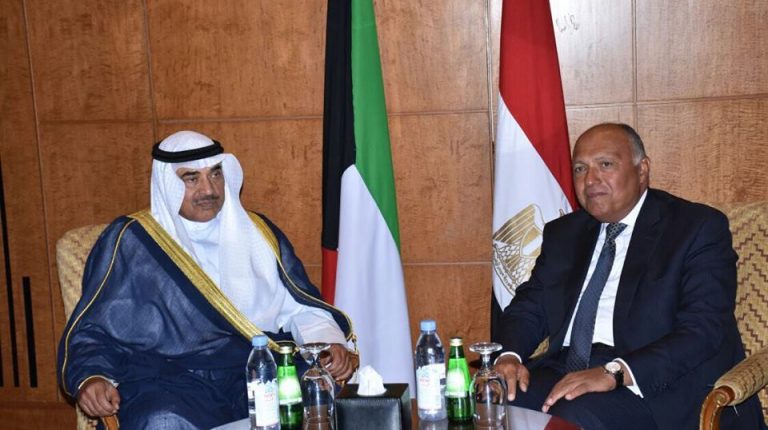 The two sides discussed bilateral relations and ways of boosting and supporting it, as well as the preparations of the common committee which is set to be held by the end of the year. They also said that they are looking for more cooperation and coordination in all levels, according to a statement by the Ministry of Foreign Affairs.

Professor of Political Science at Cairo University Hassan Nafea said that the crisis has a negative impact on all Arab countries. He added that the superpowers are attempting to decrease this impact but that there is also attempts to extort the Gulf countries from regional and international powers.

Nafea told Daily News Egypt that the mistrust between Gulf countries started before the recent leaks of the Gulf Cooperation Council’s (GCC) documents, that the anti-Qatar alliance will not escalate, and the crisis will gradually diminish and won’t be solved. “Egypt is not leading the crisis; Saudi Arabia and the United Arab Emirates (UAE) are leading the battle with Qatar, but Egypt is following Saudi Arabia,” he added.

UAE’s State Minister for Foreign Affairs Anwar Gargash denied on Monday that his country was involved in any alleged hacking of Qatari websites, including the Qatari official agency QNA on 24 May.

Gargash added during attending a lecture at the Royal Institute of International Affairs Chatham House that the UAE would not escalate its boycott to Qatar by asking companies to choose between doing business with the UAE or Qatar.

The Washington Post reported on Sunday that US intelligence officials asserted that the UAE is behind hacking Qatari governmental news and social media outlets in order to post incendiary false quotes attributed to Qatar’s emir, Sheikh Tamim Bin Hamad Al-Thani, in late May, which sparked the ongoing upheaval between the country with its neighbours.

Officials were made aware last week that newly analysed information gathered by US intelligence agencies confirmed that on 23 May, senior members of UAE’s government discussed the plan and its implementation, according to The Washington Post.

The false remarks attributed to Qatar’s emir on QNA platforms said that he had called Iran an Islamic power and a “major force to ensure stability in the region” and defended Hamas and Hezbollah.

Early in June, the Qatari authorities announced that the FBI is believed to be helping Qatar investigate the source of the alleged cyberattack that has led to diplomatic tension between Qatar and other Arab Gulf countries.

On 5 June, Egypt, Saudi Arabia, the United Arab Emirates, Bahrain, Yemen, and Libya’s eastern-based government, in addition to the Maldives, cut their ties with the State of Qatar. The six Arab governments accused Qatar of supporting terrorism, disturbing security and stability in the region, and supporting Iran. Doha denied the accusations.