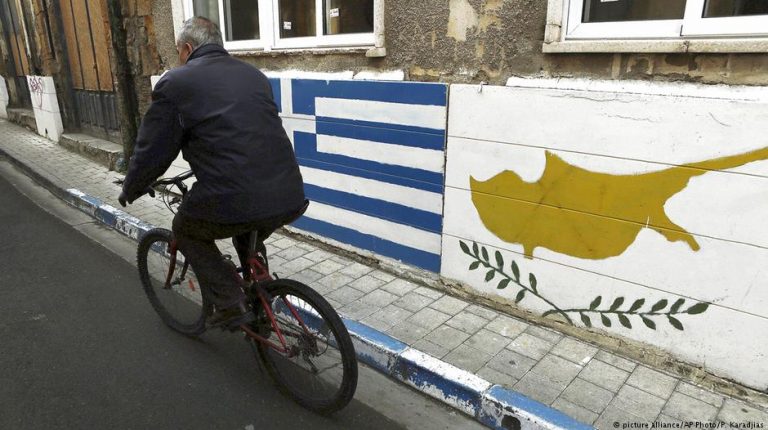 After years of fiscal gloom, Cyprus’ government is pressing ahead with its drilling plans. But potential instability looms as Turkey talks tough and sends battleships to the region.It’s deja-vu all over again. Just six years after Turkey threatened Cyprus to pull the plug on a controversial energy project, Ankara is now warning of new reprisals, and has sent warships to shadow drilling vessels exploring for oil and gas off the coast of the war-divided Mediterranean island.

Turkey doesn’t want the drilling to proceed before securing a deal that would give the island’s Turkish Cypriot community an equal share of the revenue. Yet faced with such prospects, a potential agreement went amiss this month as United Nations-sponsored talks to reunite the island’s Greek and Turkish sides collapsed amid anger and recriminations, marking the end of a process seen as the most promising in recent years to resolve one of Europe’s most intractable ethnic conflicts.

Countless attempts to stitch Cyprus back together have failed since 1974 when Turkey invaded the island in the wake of a coup staged by nationalists supporting union with Greece. Since then Ankara has retained a 30,000-strong standing army on the island. How it will react to Cyprus’ new drilling project following the latest breakdown in peace talks remains unclear.

So what’s different in this latest energy showdown in the eastern Mediterranean? For starters, Recep Tayyip Erdogan.

Back in 2011, when Ankara made similar military threats in the wake of Cyprus’ first major attempts at oil drilling, concerns ran much deeper for Greece and its ethnic kin on Cyprus. The then Turkish prime minister was seen as a darling of the West; Turkey, a cherished ally of Washington. But since then, Mr. Erdogan – now the president of Turkey – has abandoned democracy, and built a strongman cult of personality.

What’s more, his increasingly aggressive behavior has put him on a collision course with key allies including Israel, Egypt and the European Union. And, his somewhat mercurial role in the conflict in neighboring Syria has seriously diminished the clout he once held in Washington.

While Western officials concede they cannot entirely ignore the populist and popular Turkish leader because of his country’s geostrategic importance, Washington has waded into the emerging energy standoff, supporting the right of the recognized government of Cyprus – a member of the European Union – to drill in its water.

That backing risks emboldening Greek Cypriot unwillingness to share oodles of cash that untapped oil and gas reserves may potentially yield. It could also enflame Turkey’s displeasure, sparking a regional crisis. But don’t bet on it.

For now at least many experts are dismissing Turkey’s latest sabre rattling as nothing more than theatrics.

“For years, Turkey and Mr. Erdogan have been building up the image of a regional superpower,” says Professor Contantinos Filis, Director of Research at the Institute of International Relations in Athens. “By not being engaged in this key project, Turkey feels upset, isolated and rejected. And while it knows that it only has itself to blame, Mr. Erdogan is trying to save face before his domestic audience by flexing his muscle and playing tough with Cyprus.”

Although both are members of NATO, Greece and Turkey have been at odds over airspace and sea rights for decades.

In 1996, the age-old foes came to the brink of war with the US pulling both sides back from conflicting claims to a remote Aegean outcrop inhabited only by goats, rabbits and sheep.

Read: An island caught between the EU and Turkey?

“Turkey strikes a fire every time it feels secure enough to do so,” says Filis. “Nowadays it has no solid alliances to fall back on.”

However reassuring this may seem, Athens isn’t taking any chances. The country’s military is already on alert, watching two warships and a submarine which Turkey has dispatched to Cyprus to monitor drilling operations at the Onesiphoros West 1 well, and Block 11, off the island’s southern shore. The EU and Washington have warned Ankara to refrain from any hostile actions.

A lot of energy at stake

After years of financial gloom, Cyprus now has the potential of becoming a key energy player in the eastern Mediterranean. The size of potential gas and oil exports remain unclear. Still, the promising prospects alone have global energy and production companies abuzz.

Earlier this year as exploration got underway, Graham Bliss, senior energy analyst with IHS Markit billed the Block 11 well as “one of the most critical drillings” to be made this year. The Cyprus government has commissioned French energy giant Total and Italy’s ENI to help with the project.

While gas is the primary target of the drilling, experts hope to hit oil, too – a discovery that would rocket Total into the ranks of the leading exploration and production players including BP, Exxon Mobil, Shell and ENI in the greater region.

Drilling, which is due to be completed by September, is expected to reach a maximum depth of around 4.25 kilometers (2.6 miles) below sea level, or 1.6 kilometers beneath the sea bed.

“Ultimately,” says Professor Filis, “Mr. Erdogan may have to prove more predictable than the unpredictable force he is perceived to be. If he wants a piece of the action, he will have to find a way into the action.”

“It’s not simple and it won’t happen overnight, but it’s the only realistic option left for him in this energy race.”