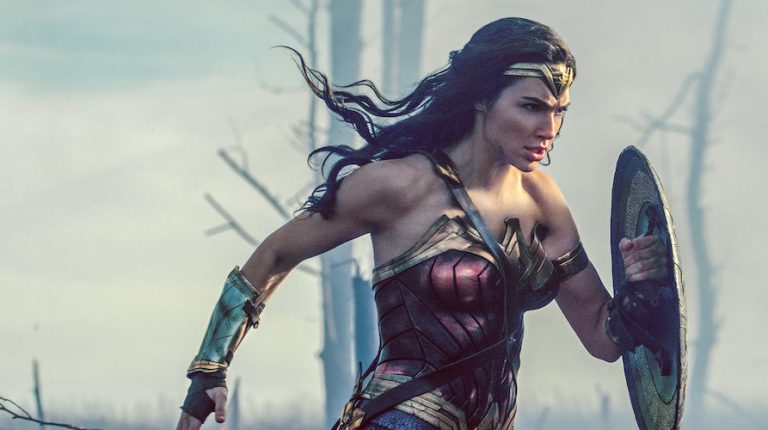 Wonder Woman, directed by Patty Jenkins, follows the origins of one of DC Comics’ most popular superheroes from her life among the Amazonians in the sheltered island of Themyscira to the frontlines of World War I. The film is beautifully shot, with remarkable colours, solid acting, and impeccable choreography. It cannot, however, escape its political dimensions.

Diana (played by Gal Gadot) is raised on the island, knowing that the duty of the Amazonians is to protect humanity from the corruption of Ares, Greek god of war. From its first moments, the film uses colour schemes to set up a dichotomy between the idyllic landscape of the dome-enclosed island—endless green and Mediterranean blues evoking peace—and the world outside: grey, chaotic, violent.

The duty to protect humanity against the violence of war is the driving force behind the film. Diana leaves the island because she cannot fathom that the death and destruction left behind by World War I could be anything other than the work of Ares. She vehemently defends humanity’s goodness, repeatedly affirming that she need only kill Ares for mankind to return to its peaceful ways.

Diana is a profoundly humane character. She cannot pass a hungry, wounded, or weak human without insisting that she and Steve Trevor (played by Chris Pine) stop and help. When she passes No Man’s Land among a hailstorm of German bullets, she destroys the machine guns and attacks the weapons, not the soldiers.

As a liberated village applauds and thanks her, Diana keeps her eyes wide, a smile playing at her lips. Although she just catapulted herself into a church tower to take down a sniper, she is not depicted as a posing superhero and does not take much space in the frame. She is letting her surroundings control her for the moment. She is emotional, easy to relate to, and human.

More than just femininity, the film opens up a new vulnerability and emotionality previously untapped in superhero movies. The likes of the Avengers, Superman, and Batman remain dependent on strong-jawed brooding, lacking the dexterity with which Wonder Woman expresses emotional anguish. Diana is pained at humanity’s horrors, and Gadot’s performance achieves this vulnerability in a way that complements the character’s strength.

This “feminine” performance thus never falls into the trap Black Widow’s makers did while portraying Natasha Romanova’s forced “tragic” backstory in Avengers: Age of Ultron. While Natasha’s takes on the traits of violent masculinity, keeping the emotional deminsion shallow and largely unbelievable, Diana is a far more real character. However, it is also in this vulnerability that the viewer is forced to face the politics of the film, namely Gadot herself.

“Soldiers and civilians … women and children slaughtered … their homes and villages looted,” Trevor says, conveying the horrors of World War I to a tearful Diana, who is played by an ex-Israeli soldier who has repeatedly defended the actions of the IDF and the apartheid state it upholds. It is viscerally difficult to watch Gadot’s admittedly brilliant acting as she listens to words that could as accurately describe her tour of duty in the 2006 Israeli attack on Lebanon.

To a viewer with an even cursory awareness of Israel’s atrocities, Gadot’s position is ludicrous: how could an ex-soldier who tweets supporting the attacks on Gaza and is unapologetic about her past embody a character who only ever advocates for truth, justice, and humanity? Above all, the Diana portrayed in Wonder Woman is a woman of peace. For instance, a civilian with a baby on her arm and a scarf around her head cries out to Diana for help. Visibly upset, Diana comforts the woman and takes it upon herself to stand against the soldiers who have destroyed the woman’s village. She charges into the battlefield, a beam of light and hope among a storm of bullets.

The movie—as all superhero epics do—requires a high degree of suspension of disbelief. The setting, story, and characters are all fantastical. But this break from reality can never occur completely. The viewer is never allowed to forget the political context in which the film exists, either because of a small moment (like when Gadot perfectly pronounces the Arabic name “Sami”, raising goosebumps on this reviewer’s arms) or because the film is in itself irrevocably political.

Art is never produced in a vacuum. Wonder Woman is an explicitly feminist film created for a feminist world. It panders to its audience of empowered women, through quips like “when it comes to pleasure, men are unnecessary”; modern commentary on restrictive Victorian English dress; and the fulfilment of the fantasy of every woman ever told a variation of “stay back”. Steve begins by trying to protect Diana, pushing her back. Every time he does so, she asserts her power and ignores him, fiercely charging through. This is repeated enough times that the dynamic and its subversion become a cliché.

The film is designed and marketed as a “feminist” victory. And this reviewer must admit that it is undoubtedly wonderful to have a superhero story led by a strong, steadfast, emotionally accessible woman that young girls can look up to. We have a multi-layered woman who can kick butt and be kind. But once again we are faced with the question: why do these women only come in white?

The film illustrates so-called “white” or liberal feminism. This is the same feminism that heralded Hilary Clinton and Madeline Albright before her as powerful women, ignoring their contributions to American state violence around the world. It is why both women could claim to speak of “a global sisterhood,” greeting female refugees from the same communities they bombed. It is the impossible position Arab women are placed in, between the patriarchal societies that oppress them and the neo-colonial societies co-opting messages of empowerment: what Gayatri Spivak called “white men saving brown women from white men.” It is the same position black women in the 1960s America were in, between a male-dominated civil rights movement and a white feminist project, with no room for them in either. It is the Israeli state condemning the lack of women’s rights in occupied Palestine and neglecting its role in the matter. It is the fixation on shallow mottos of empowerment or sexual liberation without paying attention to the endemic, violent structures and contexts women exist within.

What does it mean for a young woman in Egypt or the Arab World who—as this reviewer does—wants to respond to the message of empowerment this film provides, but cannot separate it from the violence in which it was created? I want to revel in Diana’s rebellion against Trevor’s protection, a vicarious liberation from every time I was told to “stay in the car” or “go inside”. But I cannot divorce Gadot’s impeccably choreographed fight scenes from the training her body underwent in the Israeli army. I cannot consider her victory in a small WWI-era German town apart from the endless “triumphs” her fellow countrymen celebrate on Palestinian graves. Once again, we find ourselves between women empowerment that does not make room for us and glorified imperialism masking itself as our liberation.

Bahira Amin is an aspiring writer, poet, and editor, with a passion for all forms of artistic expression (including film, books, and visual art). She is currently a student, double majoring in Literature and Political Science.

Having fewer children: A solution for climate change?