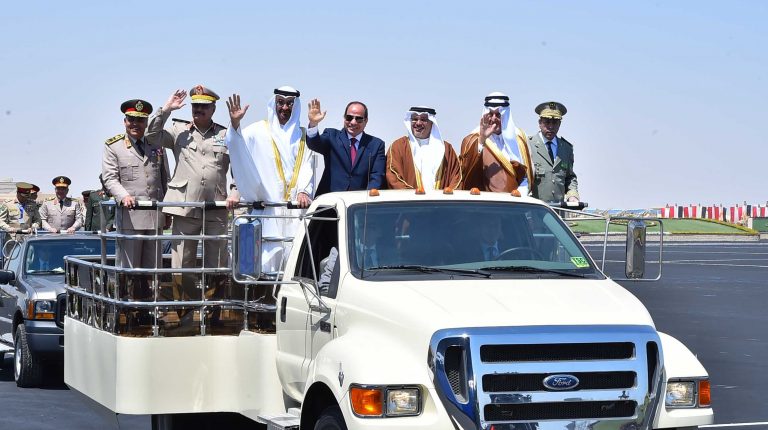 President Abdel Fattah Al-Sisi asserted on Saturday that Egypt is going two main struggles which are countering terrorism and achieving social and economic development during his speech in the inauguration ceremony of the newly established Mohamed Naguib military base West of Alexandria in the Matrouh governorate.

Al-Sisi greeted the Egyptian people for enduring the difficulties of economic developments, adding that he feels proud in front of the international community that the Egyptian have supported the economic policies.

He also talked about the phenomenon of terrorism adding that it is a complicated issue with several problems, the most important of which is the support of countries and foreign entities. He asserted that the fight against terrorism should not be limited to the field but should expand to counter its financial, logistical sources.

He added that the nations can not reconcile with the forces that kills innocent people. Also also stressed that no one should intervene in the internal affairs of Egypt.

“We will not take terrorism, as a reason to delay the social life in the country, instead we took it as a motive to exert more effort to develop our economy,” Al-Sisi said.

Al-Sisi asserted that the state is aiming to have a modern, prosperous, and educated society.

The President honored the name of General Mohamed Naguib, who lead the 23 July Revolution against the monarchy and the British colonialism. He added that the new military base should stand as a decoration to the former military personnel for their effort.

Also Field Marshal Khalifa Hafatar was among the guests, as well as several national officials in the Egyptian government and state apparatuses

The new military base will act as a headquarters for the Northern Military Unit. Reportedly the largest base in the Middle East, it is based to provide military service and protection for Al-Dabaa nuclear plant, the western side of the city of Alexandria, naval ports, oil fields in the area, as well as other military and economic cities.

According to the Ministry of Defence the new military base will consist of 1100 buildings, and includes a special unit of production with the aim of provide essential products for the personnel in the base. It is said to include 1979 feddans for vegetables, fruits, and other crops. The base will include a museum to commemorate the life and military carrier of Mohamed Naguib. I will also include several sports facilities.

During the inauguration of the military base, Minister of Defence Sedki Sobhi said in a speech that the base is a continuation to the achievements of the armed forces and its personnel.

Al-SIsi also have witnessed the military drills in several infantry divisions in the military camps of Field Marshal Ahmed Badawi and the camp of Hassan General Hasan Abu Sieda.

Also in Alexandria, Al-Sisi will attend the 4th Youth Conference on Monday, which will take place in the Alexandria Bibliotheca. It is scheduled to end on the 25 of July, and will host around 1300 young people from the governorates of Alexandria, Beheira, Matruh, and Kafr al-Sheikh. Also university students from other cities will attend.

The conference aims to bring young people to discuss crucial societal and political issues with the country’s leadership. The first conference took place in 2016 in the city of Sharm Al-Sheik.