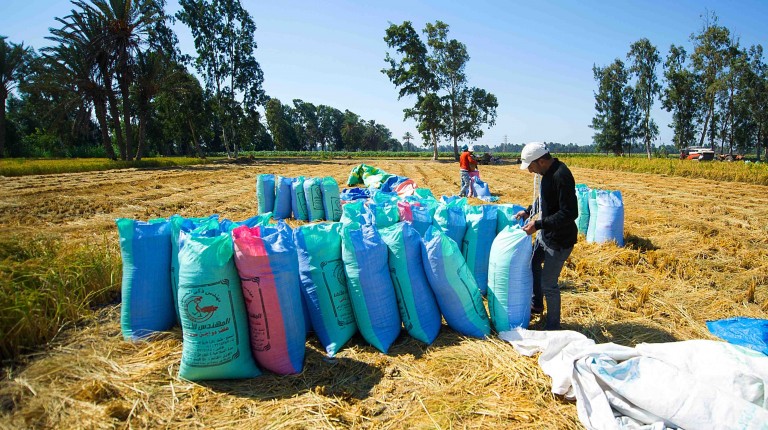 Egypt’s Cabinet surprisingly decided to set the buying price of rice from the farmers in the new season starting in August based on supply and demand mechanisms.

“We will not determine the buying price of rice and will adopt the supply and demand mechanisms, allowing competition between public sector and private mills,” Minister of Supply and Internal Trade Ali Meselhi told Daily News Egypt.

The question is can the government succeed in implementing its plans to liberalise the price of rice, and set it based on the supply and demand mechanisms, especially that Egypt has never suffered from a shortage of supply of rice?

The Cabinet decided to extend the ban on exporting rice during the coming season, in a move to secure the needs of the local market.

So what is the problem in the rice market in Egypt?

The crisis emerges when the government offers low purchase price for farmers who refuse to sell their crops at such prices, forcing the government to import Indian rice that infuriated citizens because the private rice mills buy the rice crops at high prices.

The government rice mills offer to buy rice from the farmers at EGP 3,000 per tonne, while the private sector mills offer about EGP 4,500 per tonne, prompting the farmers to store their crops or sell them to the private sector. Farmers now demand rising the government selling price of rice in the new season to EGP 4,000 instead of EGP 3,000, to compensate the rise in production costs, mainly the increase in fuel prices.

Since 2008, Egypt sometimes bans the export of rice to maintain the local rice reserves and meet the needs of the local market. It also aims to discourage farmers from growing the rice and rationalise water consumption.

The private sector mills sell white rice at EGP 6,300 per tonne, so the government sells it at about EGP 6,500.

How can the government offer adequate price for farmers and still sell it at EGP 6.5 per kilo?

According to Ragab Shehata, head of the rice division in the Federation of Egyptian Industries (FEI), said that the local production of rice reached 3.7 million tonnes in this year while the consumption is estimated at about 3.3 million tonnes, securing a surplus of about 700,000 tonnes.

Shehata added that the Minister of Supply has decided to set the purchase price of rice from the farmer based on supply and demand, provided that both the government and private mills will sell the rice at EGP 6,300 per tonne.

Despite the high reserves of rice crops, the farmers refuse to sell their crops to the government, citing the government’s low price of EGP 3,000 per tonne, which led to shortage in supply at local outlets.

He noted that the farmers will not sell at low prices any more after they sold their crops last year at about EGP 2,400 and then the prices increased significantly.

Egypt Support Coalition in Parliament recently called on the government to raise rice prices to EGP 4,000; however, the farmers consider it low, especially since the price in the private mills reach EGP 4,500 – 5,000 per tonne.

Who controls the price of rice?

The high domestic rice prices crisis started in the second half of 2014, when the government could not store large amounts of the 2015 rice harvest, allowing traders to buy the entire harvest and store it until the prices rise again.

The previous governments used to store 200,000—500,000 tonnes of rice at the beginning of the season, to prevent traders from storing it and raising prices, but the former Minister of Supply, Khaled Hanafy, did not buy any strategic reserves in the last season.

Mustafa al-Najari, head of the Rice Committee in the Agriculture Export Council, said that the Ministry of Supply had to buy the rice crops from the farmers at the beginning of the harvest, so that it could provide the commodity to citizens at affordable prices.

“The state did not buy rice at a reasonable price from the farmers, and allow traders to monopolize the market,” says Najari.

Some of the farmers in Kafr Al-Sheikh governorate, one of the most famous rice-growing areas, said that the government does not care about the farmers, and it only cares about maintaining prices especially in Cairo and Alexandria, regardless the farmer’s right to sell at an appropriate price.

They added that the remaining of the last season’s rice crops are sold at EGP 3,000 per tonne, wondering how can the government offer EGP 2,300 for each tonne. They stressed that no one will sell his crops to the government at this price.

Haitham Zalouk, a farmer in Sharqeya governorate, said the cost of production increased dramatically, noting that most of small farmers tend to borrowing to cover their needs and wait until they sell their crop so that they could repay their debts.

“The price offered by the government does not cover the cost of agriculture, after the rise of fertilisers and pesticides prices as well as wages of workers.”

He added, “Some of us can store rice for some time and wait for a better price, but most farmers sell at the best available price after harvest, to repay their debts.”

The whole rice crops have been sold to traders and the government does not have any rice.

The feddan produces an average of 3.5 tonnes.

Private rice mills sell the rice at EGP 4,500 per tonne, while the government offered EGP 3,000 per tonne.

The new season production reaches about 6.3 million tonnes of rice.

The white rice production reached about 3.7 million tonnes, while the consumption amounts to 3.3 million tonnes with a surplus of 400,000 tonnes.

The growing of a single feddan of rice consumes 6,500 cubic metres of water per year, totalling 12 billion cubic metres.

Private rice mills supply about 90% of the government’s needs of white rice.


According to various experts and farmers, the export has been always accused of raising the price of rice, however it represents only 30% of the rice crop per year. When it reached its highest level up to 700,000 tonnes, the surplus was more than one million tonnes.

The best solution to the rice crisis is that the government should declare a “fair” purchase price of rice from farmers before the planting season, and set a clear mechanism to buy the rice crops either through the Principal Bank for Development and Agricultural Credit (PBDAC) or public sector mills. In addition, the government should intensify its observation of private companies to ensure their compliance with laws and regulations so as not to store and monopolise the product.

Actually the ministry has announced that it will not determine the purchase price of rice from farmers in advance and will leave it to the supply and demand mechanisms.

The new system can lead to further increases in rice prices, because traders control now the rice market despite the high production rate and achieving a surplus.

How can the government cover the expected shortages due to traders’ storage of rice?

Shehata asserted that there is no problem in rice supply and the government has imported the necessary strategic reserves to reduce the demand for local rice and decrease its price.

The Ministry of Supply said it would compensate the shortage of rice in the supply cards, which resulted from the cancellation of the local rice tender, by offering a shipment of imported rice coming from India at lower prices than the local market. Finally, can the government succeed in liberalising the price of rice based on the supply and demand mechanisms, without increasing its price in the market up to EGP 6.5?