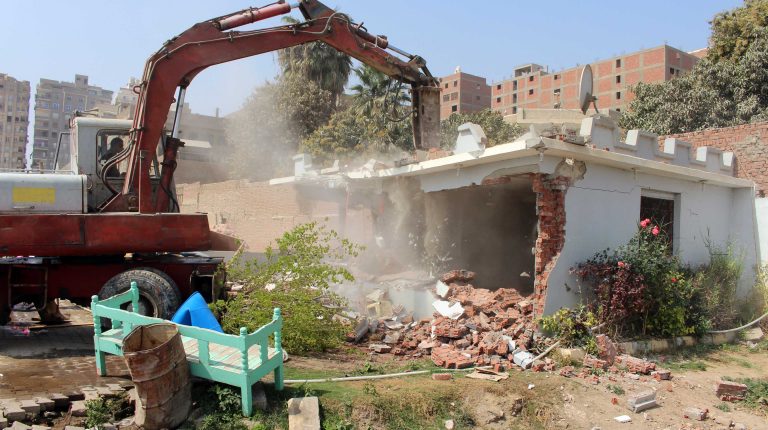 On 14 May, President Abdel Fattah Al-Sisi asserted that Egypt is not “a bake shop” during the inauguration of the National Projects Conference in Qena.

Al-Sisi expressed his exasperation at the situation of some who take over the state’s lands and asked them to settle matters, stressing that the situation is unacceptable.

Al-Sisi instructed government agencies to withdraw those lands and turn the objectors and opponents to trial.

Since then, governmental agencies have been working in full swing to remove the encroachments on state property in various Egyptian governorates.

To follow up with the efforts exerted by the government in this regard, Al-Sisi participated in a conference on 7 June to review the latest developments of removing encroachments on state land.

The total violations of the construction on state property was estimated at 168 million sqm, and the total removed or legalised violations amounted to 118 million sqm (which is 69% of the total area of all violations), while the encroachments on agricultural land was estimated to be 1.93 million feddans. Furthermore, the total area of land that has been removed, reclaimed, or legalised reached about 1.7 million feddans—which is 87% of all encroachments.

“Legalisation of large areas of land will not lead to the collection of large sums of money—but in exchange for legalisation of those lands, the government will be responsible to provide facilities, reliable infrastructure, and other services. This makes additional burdens on the government’s budget, estimated at about EGP 65bn for connecting facilities for 65 million sqm,” Al-Sisi said.

On 14 July, security forces went to Warraq Island to remove encroachments on state property, and the tenants fought back.

The 1,400 feddan (1,453 acre) island is considered one of the biggest Nile islands in Egypt, and it is situated at a unique spot that is very close to Cairo, Qaliubiya, and Giza, with which Waraq is affiliated.

Deputy of Giza Governor Alaa Al-Haras told Daily News Egypt that the government will not be intimidated to stop its plans, declining to give exact dates on when encroachment procedures would resume.

On the other hand, residents claim to have ownership rights over the lands and properties, proving that they pay for electricity and water.

Warraq residents had protested Sunday, as clashes with security forces left one dead. A large funeral was held by angry residents.

Several residents said that the goal of removing the island’s buildings is not to recover the state property, but to sell the land to a big investment company.

Mostafa Al Mekkawy, one of the Warraq Island’s tenants, pointed out that the police and army were carrying a demolition campaign on nine buildings, some of which were inhabited.

“We are not squatters, but we pay the government in return the utilities and the services, but the whole campaign to buy the island to rich investors proves that the government asked for developing a design of the island by an engineering firm named RSP, headquartered in Singapore, was completed on 31 March 2013,” Al Mekkawy noted.

Ahmed Ayoub, spokesperson of the Land Reclamation and Duties Committee said in statement to a news website that the recovered lands may be used to build development and service projects, to be sold at public auctions, or to return them to their successors if they prove that they are investing them in useful ways through a number of criteria.