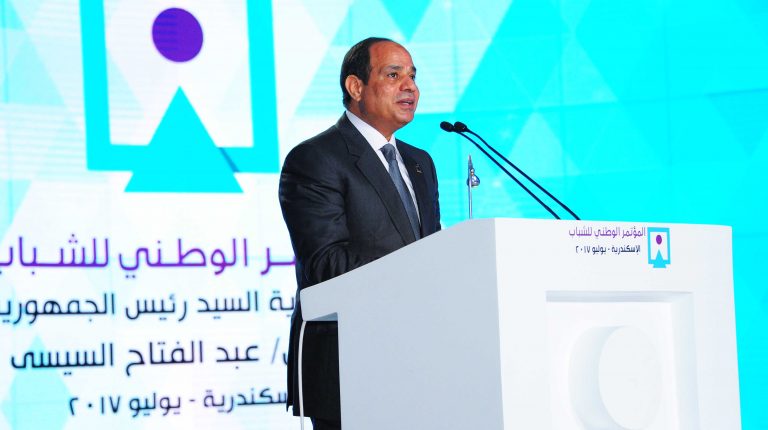 On the second day of the National Youth Conference, President Abdel Fattah Al-Sisi asserted the importance of the latest economic decisions that were taken in the latest period after the IMF loan was approved.

The president asserted that the facts about these decisions and the implications of the economic measures should be presented, all while assuring that the state is working on developing Egyptian industries and increasing exports. He also praised the Egyptian public for withstanding the implications of the economic decisions, such as raising prices.

The National Youth Conference is organised to be considered as a communication point between the government and the youth from all around Egypt and different political parties to express their demands to government officials.

Attended by 1,500 youth members from around Egypt, as well as government officials and public figures, the second day of the conference tackled the economic status of the country. During the session, Minister of Social Solidarity Ghada Waly and Supply Minister Aly Meselhi discussed the vision of the government with regards to different issues, like subsidies, youth empowerment, and addiction control.

The president also was given a tour of the Alexandria Bibliotheque by head of the library Moustafa Al-Feky.

On Monday night, Al-Sisi participated in a Q&A with the youth participating in the conference, as part of the initiative titled “Ask the President”.

He said that he appreciated how the Egyptian people have reacted to the economic development that is currently undergoing in the government.

Regarding terrorism and the countries accused of supporting militancy, Al-Sisi added that for seven years several Arab states have suffered from foreign intervention in their internal affairs, but he asserted Egypt has remained autonomous in its decision making.

He said that from the start Egypt has stood against countries that support terrorism and will continue to hold this stance. He also stressed that Egypt is fighting “the most organised group”, which led to several terrorist attacks and violence, adding that takfiri thought has been present for hundreds of years, which will take time to counter it.

He explained that the economic decisions were essential and that the state has planned to limit the consequences of the policies on the common people.

Around EGP 85m was spent in subsidies, pensions, and social allowances, the president said, adding that the newly inaugurated national projects have offered 3 million job opportunities.

Concerning running for presidency for a second term, Al-Sisi refused to answer, saying that he emphasised that citizens have to participate in the coming elections.

The conference takes place every three months in accordance with Al-Sisi’s previous decision during its launch last October. The first conference was held in Sharm El-Sheikh in October, the second in Aswan in January, and the third in Ismaila in April.

Previous conferences were also addressing current economic, social, and political issues. The focus of the Sharm El-Sheikh conference was reviewing what the state had achieved for the youth throughout recent years and how it had assisted in improving their skills, while the Aswan conference focused on discussing the issues of Upper Egypt’s governorates.