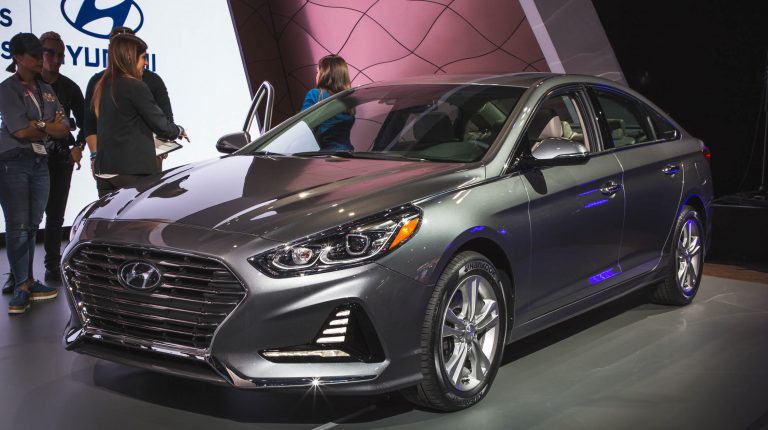 Hyundai seems aiming to acquire a bigger share of Middle Eastern market of large and midsize sedan cars, through launching the all-new Azera and Sonata, which come with a dramatic new style that gives the brand a boost in showrooms during the transition period until 2018.

In May, the Korean manufacturer introduced the 6th generation of the Azera with a 6-cylinder engine in the Gulf Cooperation Council’s (GCC) markets. It is also scheduled to launch the 7th generation of the Sonata in August. It is expected that the new version will come with significant modifications in its engine and body that will radically change the appearance of the car.

Mike Song, Hyundai’s head of Africa and Middle East Region, said that Hyundai’s big cars “achieve good sales,” stressing that his company can achieve more in this category. He pointed out that Hyundai managed to acquire a large share of the small car market.

“It’s time for Hyundai to shift from being an alternative in the big sedan category to a powerful brand that can take the lead in the market, similar to the small cars market; the Accent and Elantra, as well as SUVs,” Song stated.

The Azera and Sonata have made an important breakthrough in the design and technology of their category. The developments included the so-called cascading grille, which represents the latest addition in Hyundai’s design. The grille is new, as are the trunk lid, rear bumper, and the sills below the doors that go beyond Hyundai’s highly successful design, known as “smooth sculpture”.

“The refreshed design for the Sonata is very different from the car it replaces and goes far beyond the few small cosmetic changes people normally expect for a face lift model,” said Song.

“The appearance from both the front and rear is completely new, with clever detail changes to the exterior trim along the side of the car, making a subtle difference to the car’s side profile. The body looks longer, wider, and sportier than before.”

According to Song, the appearance of the car has changed so much that it has nearly become a new model, and it certainly gives consumers more than a few small changes. The chrome lines around the side windows extend forward to the headlights as they did before, but now they go further to the front of the car and under the headlamps for a unique, sophisticated look.

The new Azera and Sonata include new technology features related to connectivity, such as Apple’s CarPlay in Saudi Arabia and the United Arab Emirates (UAE), as well as wireless phone charging and remote operation.

The Azera also features a SmartSense package to help Hyundai’s driver. This package can automatically detect dangers and help the driver avoid collision.