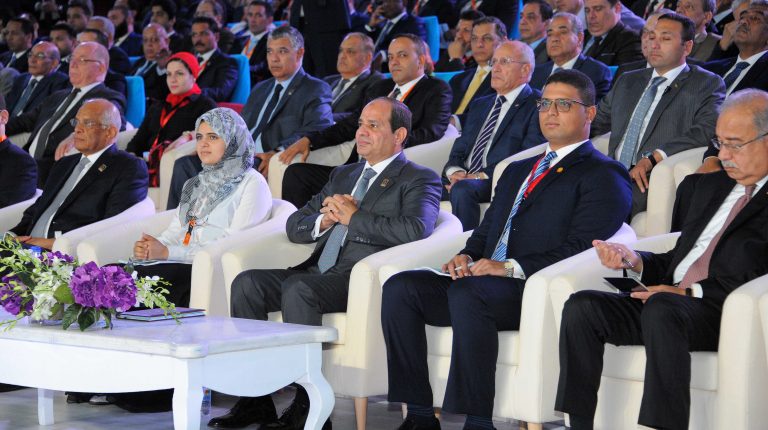 President Abdel Fattah Al-Sisi said on Monday that the state would not allow the displacement of citizens, asserting that “it is unacceptable to violate the state authority,” in reference to the recent tensions in Warraq Island.

Al-Sisi’s comments came during the 4th National Youth Conference in Alexandria as part of the “ask the president initiative”, where the president responds to the citizens’ inquiries.

“Warraq Island is about 1,400 feddans in area, and if they were all allocated for residential use, imagine where all sewage goes: in the Nile, of course. We would suffer kidney diseases and pollution,” Al-Sisi said.

He also said that the state authority and law enforcement were absent, explaining why the number of land encroachment increased lately.

“No one has the right to seize the property of any citizen, the Constitution and the law prohibit this,” he added.

Al-Sisi further compared Warraq Island to Zamalek Island in the Nile, which is known for expensive real estate and the housing of several embassies and offices of international organisations, saying that Warraq is even larger than Zamalek.

“After Al-Sisi’s speech, people were assured that the issue was not only about encroachment demolition, but rather an investment aspect,” a resident of Warraq Island, Abdelfattah Mohammed, told Daily News Egypt.

Expressing residents’ frustration, Mohammed said that members of parliament (MPs) discussed the issue with the residents; however, no results appeared. Some of the residents also met with the secretary of the governor, but they were not representing the entire island’s residents, and the meeting did not result in anything, according to Mohammed.

“We are not against the state or development, but the people must be compensated, and they are not against legalising their status or paying to the government for legalisation,” Mohammed explained, adding that any development of the island must take place with the presence of its residents.

Meanwhile, the cabinet’s Information and Decision Support Centre (IDSC) reported that construction on Warraq Island was not allowed to reach more than 2% of the island’s area, but now construction on the island far exceeds that and houses 90 thousand citizens, in violation to environmental standards.

“The state did no attempt to displace the people, but rather only aimed at demolishing encroachments,” the report read, denying allegations of long-term plans to displace the island’s residents.

Commenting on whether the government notified the island’s residents of the recent encroachment demolition campaign, the report pointed out that the government attempted to develop the island since 1998, when it decided to turn the island into a natural reserve.

Furthermore, the report denied cutting the basic services from the island, although it was reported earlier than on the night of the clashes, electricity was cut off in the island, and the service of ferries, which residents use to commute, was halted.

“Whoever holds contracts or documents proving property in the island would not face demolition,” the report read, adding that “only if the property is used in the cited purpose.”

According to Mohammed, some residents have contracts to their properties since the 19th century. He also asserted that some of the demolished buildings were inhabited, although several officials denied such allegations in press statements.

Mohammed also explained that the residents have long suffered from lack of basic services, including school, hospitals, roads, and sewerage, adding, “the island was built by our hands.”

According to Prime Minister (PM) Sherif Ismail’s press statements following tensions, the state intends to “restore its territory” and has issued at least 700 demolition orders. Similarly, he claimed the government did not target citizens’ houses.

On 16 July, clashes erupted between security forces and residents of Warraq Island as a result of an encroachment demolition campaign on the island by the government.

The clashes resulted in the death of a citizen and the injury of dozens from both sides. The retreat of security forces is likely to be temporary as government officials have asserted they had no plans of stopping the demolition of buildings they claimed exist on lands owned by the state.

“Security forces assaulted people in order to demolish their houses,” one of Warraq Island’s residents, Mahmoud Mohammed, earlier explained to Daily News Egypt regarding how the clashes began.

Police forces also arrested 10 citizens on the day of the clashes, after firing tear gas to disperse the crowds as unarmed individuals “attacked” the forces and workers of the demolition campaign by throwing stones, according to a Ministry of Interior statement.

The North Giza prosecution ordered the detention of at least nine people for 15 days pending investigations, according to state-owned newspaper Al-Ahram. The prosecution accused the defendants of causing riots during the clashes between residents and police.

The demolition campaign was temporarily stopped. When contacted, Deputy of Giza Governor Alaa Al-Haras declined to give the exact dates on when encroachment procedures would resume.

High-ranking officials said that Warraq Island would be on top of the list of the government’s development plans to become a hub for business and investments, as well as legalising the residency of current residents, according to local newspaper Al-Masry Al-Youm’s report.

In August 2014, the Minister of Housing and Urban Development Mostafa Madbouli discussed with the governor of Giza Ali Abdulrahman a plan to develop Warraq Island, Al-Ahram reported.

The plan was set to establish tourist attractions, public open areas for entertainment, and cultural activities, investing in the island’s unique location.

Local media reported that an Emirati company was carrying out a project towards the development of Warraq Island, which Al-Haras denied.

President Al-Sisi initiated a campaign in May titled “The People’s Right” to retrieve state property and demolish encroachments in all governorates around Egypt. The armed forces joined the campaign alongside security forces, demolishing thousands of buildings since then.

In June, Al-Sisi condemned during a speech encroaching buildings, adding that “the islands should be a priority to deal with,” in reference to Warraq.

In 2002, the Administrative Court annulled a decision by then-PM Atef Ebeid to turn Warraq and Al-Dahab islands into public property, granting the residents their property of land, according to local media reports.