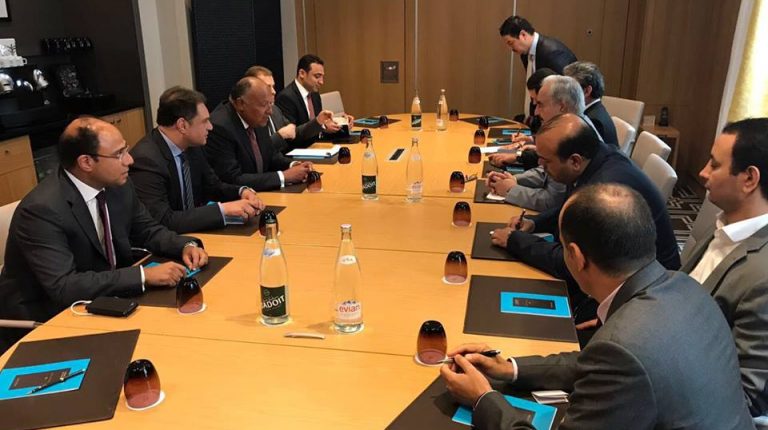 Egypt welcomed on Monday the results of the meeting of the two main rivals in conflict-ridden Libya, Prime Minister Fayez Al-Sarraj and Field Marshal Khalifa Haftar, hosted in a western suburb of Paris by French President Emmanuel Macron.

The Egyptian Ministry of Foreign Affairs issued a statement on Tuesday evening, praising the final statement of the meeting which asserted the political solution as the only solution for the Libyan crisis, countering terrorism, and saving the unity of the Libyan territories.

The statement stressed that the agreement is a step forward to reaching a comprehensive solution in Libya, praising the level of coordination between Egypt and France in the last months. According to the statement, Egypt will continue exerting efforts cooperating with friendly countries to boost the political solution basing on Al-Skhirat agreement in December 2016.

Shoukry also met with Field Marshal Khalifa Haftar in Paris. They discussed the developments in the Libyan issue, and asserted Egypt’s trust in the collective work to help in reaching a solution that will satisfy all parties, according Egyptian Foreign Ministry spokesperson Ahmed Abu Zeid.

Haftar expressed his appreciation to the Egyptian role in activating the peaceful solution and dialogue between all Libyan parties. He also briefed Shoukry in the details of his meeting with Al-Serraj, Abu Zaid said.

“We commit to a ceasefire and to refrain from any use of armed force for any purpose that does not strictly constitute counterterrorism,” Al-Serraj and Haftar said in a joint declaration.

The joint declaration called for the demobilisation of fighters and to make all efforts to integrate them into the Libyan national army, creating a national amnesty process, and a transitional justice system.

Also, the Libyan rivals committed to building the rule of law in a sovereign, civilian and democratic Libya, working on establishing a roadmap for the security and defence of the Libyan territory against threats and trafficking of all types, and committed to work towards the holding of presidential and parliamentary elections as soon as possible as from 25 July in cooperation with the relevant institutions and with the support and under the supervision of the United Nations.

French President said at a news conference after the signing of the agreement that both Serraj and Haftar had shown historic courage in agreeing to the ceasefire. He also confirmed that elections could be held in Libya in spring 2018.

Furthermore, Head of the Libyan Presidency Council of Government of National Accord welcomes Paris meeting, considering it as “great step” towards reconciliation and lasting peace, according to an official statement.

Haftar is backed by Egyptian leadership and the United Arab Emirates, while Al-Serraj is backed by Haftar’s rivals, armed groups in Misrata in the west, and by some groups in Tripoli, the capital city.

Violence has outraged in Libya since 2011, when a popular uprising ended with the ousting and death of former President Muammar Gaddafi. Since the ousting of Gaddafi the country has had rival governments and parliaments in the west and east.