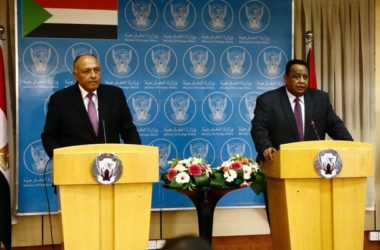 Egyptian Foreign Affairs Minister Sameh Shoukry headed Egypt’s delegation at the Political Consultations Committee on Thursday with the Sudanese side headed by Sudanese Foreign Minister Ibrahim Ghandour, according to an official statement.

The meeting discussed means of developing bilateral relations, as well as a number of regional issues of common interest. Both sides agreed to regularly hold the Political Consultations Committee of the Higher Joint Committee at the presidential level between the two countries.

During the meeting, Shoukry stressed the importance of holding the meetings of the committee on a regular basis, so as to reflect the specific and deep bilateral ties, with Egypt’s keenness to develop them in all fields, the Foreign Ministry spokesperson Ahmed Abu Zaid said.

He also noted the crucial role of the specialised technical committees between the two sides in order to overcome all obstacles in promoting bilateral relations, thus paving the way for convening the Higher Joint Committee at the presidential level in October 2018, the statement read.

The two ministers also discussed the economic and trade relations and the outcome of the technical committees’ meetings between the two countries. Shoukry welcomed the convening of the Joint Borders Committee this month in Cairo, as well as holding the second board meeting for the agricultural integration company at the earliest convenience, according to the statement.

The meeting also dealt with bilateral cooperation in the field of security and counter-terrorism, and emphasized the importance of seeking to contain the negative media escalation, and activating the signing of a media code of honor between the concerned parties in the two countries. It also highlighted the need for cooperation between the two sides in expertise transfer and training cadres, as the Institute for Diplomatic Studies, affiliated with the Ministry of Foreign Affairs in Cairo, organised training for a group of Sudanese diplomats, Abu Zaid added.

Regarding the Nile waters file and the Grand Renaissance Dam, Egypt’s foreign minister outlined the importance of resuming the meetings of the tripartite technical committee as soon as possible, to expedite the completion of the studies carried out by the consulting offices. He also discussed the recent Nile Basin Summit held in Uganda and its results, affirming that Egypt started preparations in the run-up to the Nile Basin Summit next year, and expects Sudanese support in this regard, the spokesperson explained.

According to Abu Zaid, the meeting also tackled consular issues to clear all obstacles hindering citizens’ mobility between the two countries, in addition to joint coordination within international forums and the importance of mutually supporting both countries’ candidates for international positions, as Egypt is looking forward to Sudan’s support for Ambassador Moushira Khattab in her candidacy for the post of UNESCO Secretary-General. They discussed as well a number of regional issues of mutual concern, including the situation in Libya, Syria and Yemen.

Strained relations had continued since July 2013, when former president Mohamed Morsi was ousted from power. In the past couple of years, multiple other issues have amplified tensions between the two countries, such as the disputed Halayeb and Shalateen triangle, Sudan’s support of the Ethiopian dam, and the ban of Egyptian agricultural products.