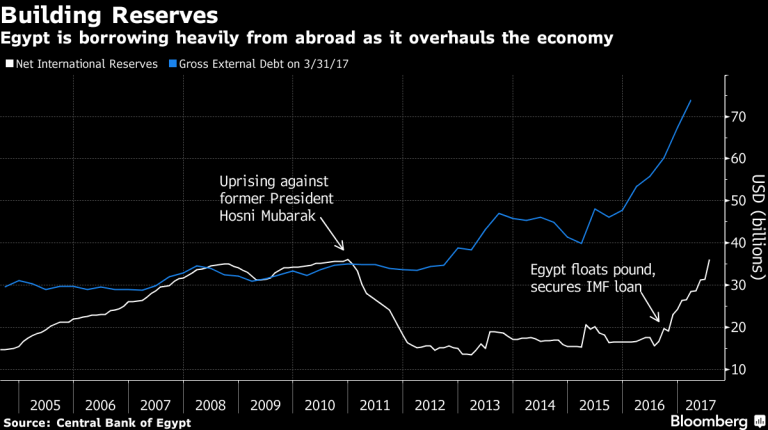 A recent report by Bloomberg said that Egypt has fuelled its foreign reserves with heavy external borrowing from international market.

The reserves hit a record high in July standing at USD 36.036 billion, an increase of USD 4.7 billion on monthly basis.

The reserves have been on the rise since the country floated its currency and clinched a deal with IMF for a three-year $12 billion loan.

Bloomberg report noted that the increase has been driven by heavy external borrowing as investors pour money into Egyptian assets following the government’s lifting of most currency restrictions and the IMF’s approval of a $12 billion loan.

According to the report a total of $14 billion have flowed into Egyptian treasury bills, which are among the highest yielding in the world.

The central bank floated the Egyptian pound in November to attract foreign capital after years of political instability drained the country’s reserves, and the currency has since more than halved in value.

Last month, Egypt received the second instalment of the its International Monetary Fund (IMF) loan, the equivalent of USD 1.25 billion, an official source with the Central Bank of Egypt told the state-run Mena news agency.

The popular uprising that toppled former president Hosni Mubarak in 2011 led to a period of political turmoil that dried up Egypt’s vital sources of foreign currency, such as tourism and foreign investment.

Appetite for Egypt’s domestic debt has increased since the central bank floated the currency in November.