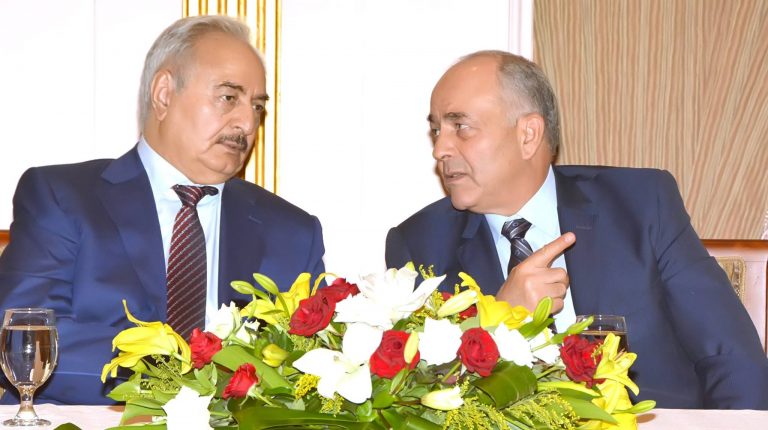 Egyptian army Chief of Staff General Mahmoud Hegazy, the head of the Egyptian Committee for the Libyan issue, met on Sunday with the Libyan Field Marshal Khalifa Haftar, the chief of the National Libyan Army.

The meeting discussed the exerted efforts in the Libyan issue until now and the results of the Paris Agreement and future plans for resolving the crisis, according to a statement issued by the military spokesperson, Tamer Al-Refaie.

During the discussions, the two sides asserted the importance of exploiting all the positive results to reaching a comprehensive political settlement meets the demands of the Libyan people without the abandonment of the national principles, the statement read.

Haftar expressed the Libyan people’s and his own appreciation of the Egyptian exerted efforts to resolving the crisis in all levels, praising the reconciliation efforts between Misrata and eastern Libya, according to the statement.

Al-Refaie added that Hegazy praised the efforts for confronting terrorism in Libya, asserting the importance of unifying efforts and coordinating views to keep Libya united and free of extremism, and supporting international and regional security and stability.

Two weeks ago, Egypt welcomed the results of the meeting of the two main rivals in conflict-ridden Libya, Prime Minister Fayez Al-Serraj and Haftar, which was hosted in a western suburb of Paris by French President Emmanuel Macron.

Egypt has good relations with Hafter since the beginning of the presidency of Abdel Fattah Al-Sisi. The Egyptian air force has launched several air raids inside the Libyan territories, saying that it has coordinated with Haftar to attack “terrorist groups”. Haftar is backed by Egyptian leadership and the United Arab Emirates.

Violence has outraged in Libya since 2011, when a popular uprising ended with the ousting and death of former President Muammar Gaddafi. Since the ousting of Gaddafi, the country has rival governments and parliaments in the west and east.