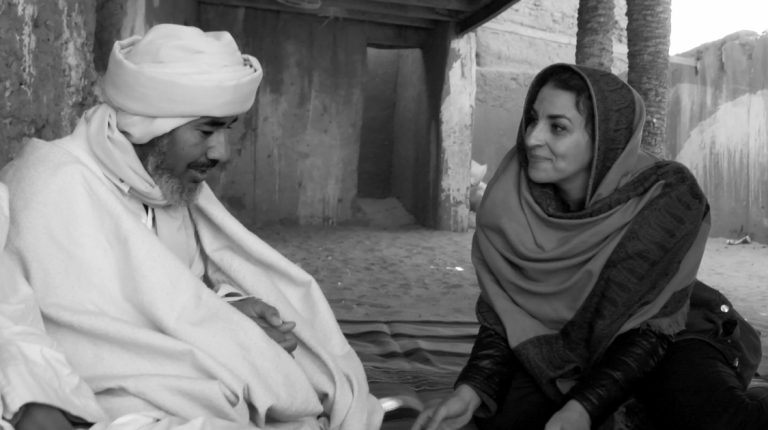 One of the main issues in the east is centring all attention on women. In a time where people have surpassed their physical needs, heaven remains for the eastern people a collection of food and women.

In Merzak Allouache’s 2017 docunarrative Investigating Heaven, we follow the story of Nejma, a journalist who is doing an investigative report on the concept of heaven in the Algerian society. She asks her subjects what paradise will be when the pious dead men are promised a 72 sex-driven virgins by the divine.

The film is indeed a brave tackling of an ever existing issue in the world, especially eastern societies, which is obsession with heaven and the concept of reward and punishment. Although these concepts are global, they prevalent in the Arab world.

Allouache’s documentary explores this by surveying the different narratives coming from different generations, social classes about the concept of heaven.

The female protagonist Nedjma (Salima Abada) investigates these opinions after seeing the videos that propagates jihadist thoughts in the mind of Arab youth, by seducing them with having sex with the 72 virgins.

This technique, a primitive one, makes uncultured youth an easy prey in the hands of those clerics who spread the virus of Whabism that is sponsored by Saudi Arabia.

In an interview with the main character in the film, Nedjma (Salima Abada), during the Luxor African Film Festival (LAFF) she said that the Algerian cinema and cultural sphere in general received a lethal blow after the civil war in the 1990s.

During this period, she adds, Algerians have lived while being deprived of the cinematic culture, which made a gap between the Algerian scene and others in the Arab countries.

What young Arab filmmakers are doing, is trying to keep up with the international cinema.

No doubt that after the influx of Arab refugees to Europe, Arab affairs are becoming a topic of interest for the European audience. The eagerness to understand how the newcomers in Europe think, gained the film much attention in this year’s Berlin International Film Festival.

In Egypt, the film was screened in The Luxor African Film Festival (LAFF) as well as the Cairo Cinema Days.