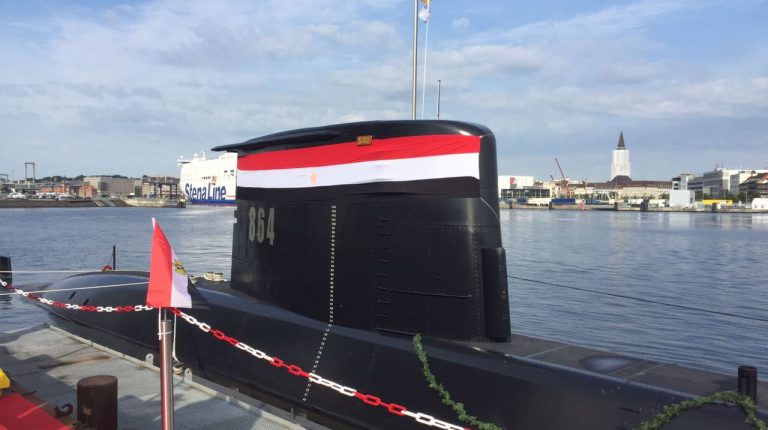 Yesterday, the Egyptian armed forces received the s42 submarine of the model 209/1400 from Germany. This is the second submarine purchased by Egypt from the German side after the s41, which joined the Egyptian navy fleet a few months ago in a deal between Egypt and Germany to buy four submarines, which have the ability to target ships and submarines that are hostile to Egypt’s maritime routes and regional waters.

Before raising the Egyptian flag on the submarine in Kiel, Germany, to signify its service, Commander-in-Chief of ‎the Egyptian Navy Vice Admiral Ahmed Khaled Hassan Said, said that the arrival of these submarines to Egypt reveals the presence of high-quality cadres whom have the ability to efficiently work with modern technology.

He added in his speech to celebrate the receipt of the submarine, which possesses enormous offensive capabilities, that Egypt had a head start in the Middle East and Africa (MEA) region to have submarines enter its naval fleet.

Moreover, Said pointed out that, in light of the challenges of the region and the collapse of armies of neighbouring countries, Egypt still managed to remain strong and continue building its army. Nevertheless, the naval forces has managed over the past years to upgrade and establish its fleet and infrastructure, which includes one of the largest berths that receives submarines, in addition to the latest training techniques.

Furthermore, part of the Egyptian military strategy in purchasing this type of submarine aims at developing the ability to meet the challenges and risks surrounding the region to maintain full control over the costs of both the Red and the Mediterranean seas, said Said.
He noted that the completed deal, including the Mestral, the submarine, the frigate, the rocket launchers, and others, were important in light of the instability of the region as part of the naval forces’ plan to develop and upgrade their defensive and offensive capabilities to be a message of deterrence to those who wish to harm Egypt’s economic interests or threaten its national security.

Additionally, Said stated that the joining of modern combat units will enable us to secure all vital and economic objectives in light of the growing discoveries of oil and natural gas and the need for these discoveries, which are located at distances far from the coast, and this requires combat capabilities and special skills, including the ability to sail long distances and carry out volatile sea conditions to secure those targets.

The development of Egyptian political relations with the world after 30 June has had a positive effect in strengthening distinguished relations with all countries of the world in all political, economic, and military fields—in addition to the historical relations with Germany, which led to the arrival of the submarine after six years of signing the contract, according to Said

On arming the Egyptian army and its naval forces from different sources, Said said that the general command of the armed forces was keen on including the strategy of the development of armaments of all branches of the Egyptian army on a variety of sources.

Said stated that modern marine forces were keen to develop all curricula at the Navy College to keep pace with the technological development of these units in addition to the continuous training of those who newly join the naval forces. He added that the modern marine forces provide the opportunity for students to attend joint exercises with friendly countries to learn the latest military technology has reached.