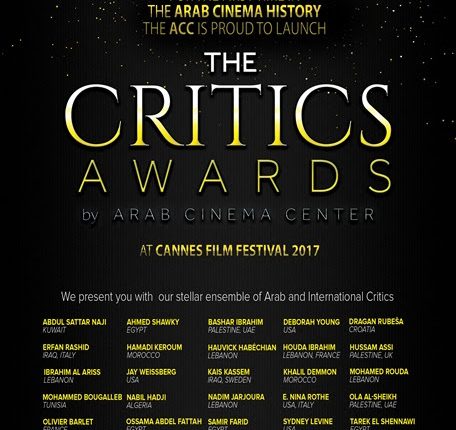 A new sixth category has been added to the upcoming 2017 Annual Critics Awards. The annual awards organised by the Arab Cinema Center (ACC) will add a new category for the best documentary.

ACC announced the addition of the latest categories in a press release, adding that it offers a new service on its website that enables its users to read reviews of the nominated films.

“The decision of adding the documentary award came from the jury members’ suggestions during the voting stage,” said Ahmed Shawky, the manager of the Critics Awards, adding, “the jury board will also be developed in the coming years by appointing more qualified Arab and foreign critics to enrich the awards and allow Arab critics express their point of view.”

The award of the best documentary will be added to those of best actor, best actress, best director, best film, and best writer.

As for the reason behind allowing followers to read film views online, Alaa Karkouti, co-founder of the ACC explained that it’s an important step in the history of film reviews that is not achieved by any film festival so far.

“Even though film criticism plays an important role in the Arab film industry by helping film enthusiasts know about the industry’s latest trends and new films, there are no online platforms that can function as a reference for film enthusiasts to go to for film reviews in the Arab world,” he said.

For the first time in the Arab film industry, the ACC is going to collect film reviews in different languages in one place. This service is going to be updated with new items during the coming period, Karkouti added.

The Annual Critics award saw the light for the first time at the 70th Cannes Film Festival. The jury contains critics from 15 countries—the first time in Arabic cinema’s history.

In order for films to participate at the awards, ACC’s condition say that the films should have premiered at international film festivals outside of the Arab world during 2016, at least one of the production companies must be Arabic (regardless of the size of its contribution in the production of the film) and that the films must be feature films (fiction or documentary).