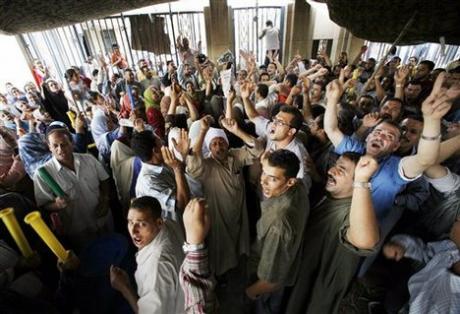 Six-thousand workers began an open-ended sit-in at the state-owned Misr Spinning and Weaving in Mahalla on Monday, demanding promised 10 % bonuses and late payment, members of the parliament in the Gharbia government said.

Member of the Parliament Nemat Qamar said that the she received a complaint from the workers notifying her of the start of the strike.

The workers warned Egyptian authorities that they would strike if their bonuses were not paid and the late payments are issued. They succeeded on Monday in stalling production in the factory by organising a sit-in.

One of the workers, who spoke on condition of anonymity, members of the security forces tried to negotiate with them, but the workers said that the strike will continue till the demands are met. He added also that hundreds of riot police members are being deployed at the entrances and exists of the city.

“We will maintain the strike inside our factory and will not go outside in order to avoid clashes with anyone,” the worker added.

The Holding Company for Spinning and Weaving is one of Egypt’s major industrial infrastructures and is reported to include more than 75,000 workers.

Mahalla workers staged a crippling strike in 2006 to demand bonuses and better wages, which inspired numerous other strikes by factory workers across the country. This strike is often credited as being one of the major factors leading up to the 25 January Revolution.

However, five years after the 25 January Revolution, strikes in Egypt are usually dispersed by force or by threats of suspension and have acted as a main source of opposition to different governments. Also, a  Cairo High Court ruled in May 2015 that any employee proven to have participated in a strike will be forced into retirement for “delaying the interests of the public”.

Officer, three suspects killed in exchange of fire in Qena

URSUS to produce agricultural tractors with investments up to $100m