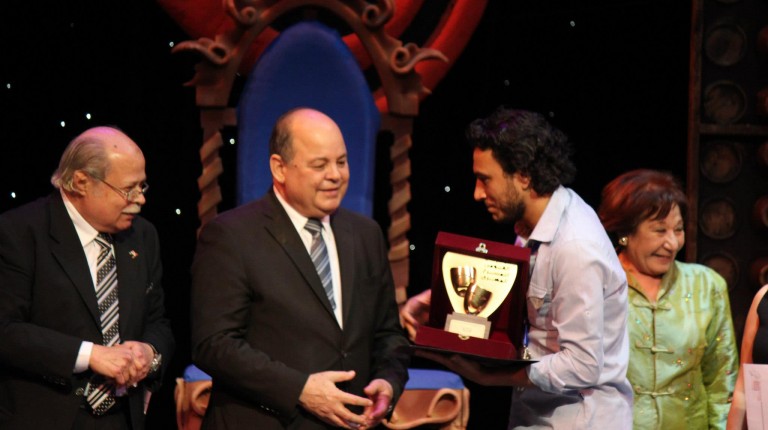 In an almost full stadium, hundreds of passionate fans gathered supportingly screaming the names of their favourite players, while these players’ families silently stood praying for their win. Only a few meters down them, fighters played for winning the title of Egypt’s second Muay Thai championship.

While stress dominated the scene, and second heavily passed witnessing serious injuries of some fighters, almighty cheering voices raised every few minutes to announce getting one of the players to finals.

This year’s championship witnessed the participation of players from all around Arab world. 120 players from different countries including Morocco, Tunisia, Algeria and Sudan participated at the annual championship. However, all of the first places of the six categories were hard-won by Egyptians.

At the 61 kilos category, young Egyptian Mahmoud Gamal took the first place over his opponent. As for the 67 and 71 categories, Ahmed Fawzy and Mahmoud Abdel Razik went through fierce rounds in order to be crowned as their categories’ best fighters.

At the 81 and 86 kilos categories, players Ahmed Samy and Ali Khouly, strongly grabbed the title with taking over their competitors in the first three rounds.

As for the 91 kilos category, the five furious rounds ended with titling Egyptian professional fighter Mohammed Gamal, as the best Muay Thai player in the Arab region.

“Every passing year, a huger progress is clearly noticed with Egyptian players skills at Muay Thai” said Mohmmed Ebrahim, owner of AUFC Academy “it was quite surprising for us that among participating nationalities, players who got into finals were all Egyptians”.

From his side, Chainarong Keratiyutwong, Thailand’s Ambassador in Egypt agreed that Egyptian players skills improve every round ahead of the others asserting that this year’s torment witnessed “boxers with much better skills that last year’s”

Keratiyutwong explained that duo to his believe that Muay Thai is a perfect-matching sport for Egyptians’ strong spirits.

“Personally, I believe that all Egyptians have fighting spirits in themselves and many of them are also physically strong and possess incredible agility. So, I think Muay Thai can fit this special character of Egyptian very well” he told Daily News Egypt.

The two-day event witnessed cultural performances from both Thai and Egyptian cultures. Through traditional dances from both heritages, audience got to explore the amusing mixture of two different cultures.

“We organized Thai and Egyptian cultural performances at the event to reflect our warm and cordial relationship between the two countries as well as to develop the sense of mutual appreciation of different culture between both sides.” Keratiyutwong added.

Despite being introduced to Egyptian society only few years ago, Muay Thai has gained a huge publicity among Egyptian martial art community.

According to Ebrahim, the sport has a base of over 6000 players in Egypt who train all year along in order to be able to participate at professional championships.

“Only the 120 fighters participated at the torment, but we received hundreds of other requests from players who seek to be a part of it” he said

Walking the same line, Keratiyutwong stated that the number of participants increase every torment, a thing that motivates the embassy to invest in the sport.

“Judging from the number of spectators, this year the number increases more than double from last year competition. Moreover, the number of Egyptian Muay Thai fighters who want to participate in the competition also increases about 25 percent. For this reason, we can confidently say that Muay Thai continues to gain increasing popularity among Egyptians” he added.

The embassy is currently planning to discover hidden talents which have no access to be spotlighted. That’s through organizing qualification rounds in different governorates in order to discover best fighters and provide them with a chance to participate at next year’s round.

Moreover, the embassy is currently studying inviting referee to train Egyptian fighters as well as to judge next year’s matches,” because I believe having top referee in the ring can greatly improve the quality of the match and make watching Muay Thai a truly memorable experience for all the spectators” Keratiyutwong concluded.