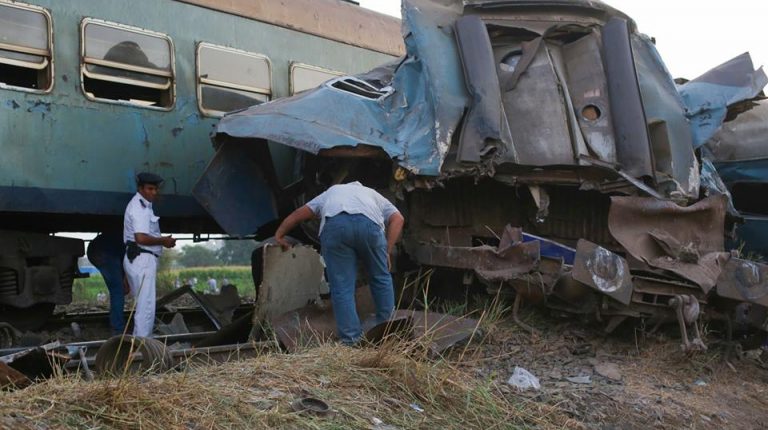 Prosecutor-General Nabil Sadeq opened investigations into Friday’s train collision incident, through the examination of the trains’ event recorders and the formation of an investigative committee, in addition to evaluating the validity of the systems, light signals, and so on, state-media reported Saturday.

At least 42 were killed in the Alexandria train collision, according to the latest figures provided on Saturday by Alexandria’s deputy health minister, a death toll that kept rising since the accident.

According to state-owned media Al-Ahram, 32 bodies were handed to their families while the identities of 10 others remain unknown.

The investigative committee includes members of the Armed Forces Engineering Authority and from the consultation office of the Military Technical College, as well as several members from the Administrative Prosecution.

Hundreds of passengers were injured. The deputy health minister told Al-Ahram on Saturday that 116 remain in hospitals, distributed across four hospitals in Alexandria. At least 133 people were injured, according to state media and possibly higher numbers in unofficial reports.

The Egyptian Railway Authority said that on Friday, at 2.15pm, a train on its way from Cairo to Alexandria rammed into the rear of another train en route to Alexandria from Port Said, resulting in the derailing of the first train’s locomotive and two wagons of the second train, local media reported.

The collision took place in Khorshid near Alexandria. Reports said the first train was moving quickly before hitting a second train parked on the same line. Earlier this month, the authority had announced speed limits for each type of train, the minimum being 50 km/h and the maximum 120 km/h.

Minster of Transportation Hisham Arafat ordered the suspension of the employees at the Egyptian Railways Authority, including two senior operation managers and two observers from the Abyss and Khorshid watch towers, state-media reported.

Alexandria Governor Mohamed Sultan accused the driver of the train of failing to notice signs, saying the railway line was closed, thus resulting in the train collision. The prosecution is yet to determine the reason the second train had stopped.

Meanwhile, journalist Solafa Salam, who visited some of the injured in one of the hospitals on Friday, reported that injuries included fractures and amputation in legs and arms, as well as bodily and facial burns.

As she also reported that two parents in intensive care said they were unable to find their five children, reports said that several children could not be identified and that no information should be given to their parents.

The railway system in Egypt remains in serious need of development and has been the subject of official discussions and demands. It is estimated that there are more than 900 trips daily. According to one of the railway’s daily reports issued on 4 August, there were 214 trains travelling long distances and 704 short distances. On that day, the authority said there were 23 trains in total that witnessed delays between 20 to 35 minutes.

Hassan Mahdy, professor of transportation at Ain Shams University, listed several problems: random railway crossings, which he estimated at 4,000 per day, lack of certified and trained employees, and lack of technologically developed systems.

“Control systems need to be computerised and depend less on human resources, and there should be smart tracking systems implemented,” Mahdy explained to Daily News Egypt Saturday.

Mahdy opinionated that the inclusion of the private sector in the business would benefit the development of the railway system.

The presidency issued a statement Friday mourning the victims. It stated that President Abdel Fattah Al-Sisi gave instructions to investigate the accident for those responsible to be held accountable. In January, during a conference in Aswan, Al-Sisi said that the development of the railway authority would require EGP 180bn, suggesting difficulties in acquiring such money, especially in light of the non-possibility of increasing the price of train tickets.

In a more recent conference in April, Al-Sisi repeated his claims. He said that the state could neither afford to pay a sum of more than EGP 100bn to develop and automate the railway system nor can it afford to take loans to do so.

In May, a report issued by the NGO Partners for Transparency showed that observing corruption and managing public funds said that the parliament’s Budget and Planning Committee requested to form a committee to investigate 50 state-entities that were in debt. Among them was the railway authority, which, during the parliament’s review of the state budget 2015/2016, was found to be indebted with EGP 47bn.